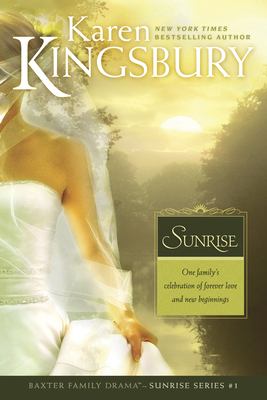 DDC classification: 813/.54 Summary: As their wedding day nears, Dayne Matthews and Katy Hart are determined to keep their ceremony a secret from the paparazzi, while a terrible tragedy strikes the Flanigan family as Cody fights for his life after an alcohol overdose.
Tags from this library: No tags from this library for this title. Log in to add tags.
Fiction notes: Click to open in new window

Book 1 in the bestselling 4-book Christian fiction series that has sold over 1.3 million copies! A story about God's unending faithfulness and the promise of new beginnings, from Karen Kingsbury, the #1 New York Times bestselling author of "heart-tugging and emotional" ( Romantic Times ) life-changing fiction. A Long-Awaited Celebration In preparation for their long-awaited wedding day, Dayne and Katy are determined to keep the ceremony a secret from the paparazzi. Their relationship grows closer and stronger as they plan together, but in the end, it takes the help of the Baxter family and many of the CKT kids so that they'll even have a chance at a private wedding. A Renewed Hope John Baxter is thrilled that his oldest son will be settling down a few miles away, but he isn't sure how any of his kids will handle a situation he can no longer run from--the feelings he is having for his friend Elaine. In the meantime, the Flanigan family is struggling with their young boarder, Cody Coleman, Jim Flanigan's star receiver. A Terrible Tragedy After an alcohol overdose, Cody fights for his life. Only God's grace and a miracle can bring him back from the brink of death--physically and spiritually.The Sunrise series is the third installment in the continuing Baxter Family Drama from America's number one inspirational novelist, Karen Kingsbury. Revisit the Baxter family in all their life-changing events, or share the series with someone who hasn't discovered it yet. Winner of Christian Retailing's Retailer's Choice Award for Best Series!

As their wedding day nears, Dayne Matthews and Katy Hart are determined to keep their ceremony a secret from the paparazzi, while a terrible tragedy strikes the Flanigan family as Cody fights for his life after an alcohol overdose.

Kingsbury continues the saga of the Baxter family from the "Redemption" and "Firstborn" series in this new series launch. The famous Dayne Matthews and his fiancee are trying to keep their wedding out of the press, but they will need the Baxters' assistance to pull it off. Meanwhile, Coach Flanigan tries to help an ailing football star as well as take care of his three adopted children. (c) Copyright 2010. Library Journals LLC, a wholly owned subsidiary of Media Source, Inc. No redistribution permitted.

Welcome back to Bloomington, Ind., where some of Kingsbury?s most popular Christian novels are set. Kingsbury?s latest feel-good offering launches a new four-book series to follow the Baxter Family Dramas, which have nearly two million copies in print. She introduces a few new faces and follows familiar characters like the Baxters through their mostly sunny lives. Unfortunately, the plot is all but nonexistent. Hunky actor Dayne Matthews and the lovely Katy Hart are engaged to be married, but they face a dilemma: how to plan a private wedding that won?t be overrun by reporters desperate for a shot of the Hollywood heartthrob tying the knot. Dayne hires a Tinseltown wedding planner who specializes in secret star nuptials, although Katy frets that keeping the wedding hush-hush may necessitate deceiving some close friends and relatives. Meanwhile, Jim Flanigan, football coach at Clear Creek High, suspects his players are drinking and tries to crack down. Inspirational platitudes litter the pages ("Jim already knew the possibilities. Now it was a matter of trusting God for the outcome"). Readers new to Kingsbury will have a little trouble keeping the characters straight and figuring out the backstory, but her many fans will relish this visit with old and new friends, despite the cliches. (May) Copyright 2007 Reed Business Information.
More book reviews at iDreamBooks.com