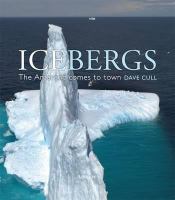 It was a sight we thought we'd never see - icebergs off the coast of southern New Zealand. Otago Daily Times photographer, Stephen Jaquiery, was the first on the scene in November 2006. His magnificent photographs not only inspired a new sightseeing industry, but also provoked an avalanche of interest from around the world. Helicopters and small planes, crammed with photographers, TV journalists, scientists, tourists, even Shrek, the celebrity merino, took to the skies to view and visit these spectacular, groaning, creaking ice islands. Writer Dave Cull takes us to the frozen continent and tracks the journey of the icebergs: from their Antarctic beginnings to their appearance and demise in the temperate waters off the coast of the South Island. He answers the questions we all ask: how are icebergs formed? Why did these icebergs travel so far north? How big are they? Where did they come from? Will we see more? Is their appearance the result of global warming? Illustrated with stunning colour photographs throughout Icebergs: The Antarctic comes to town celebrates the glorious beauty and power of the icebergs, as well as our response to their visit.Also included are maps and diagrams. 'The icebergs drifted by our coast for just a few weeks.