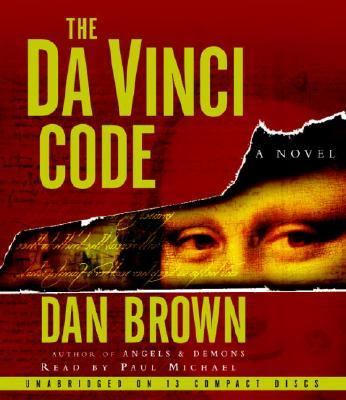 While in Paris on business, Harvard symbologist Robert Langdon receives an urgent late-night phone call: the elderly curator of the Louvre has been murdered inside the museum. Near the body, police have found a baffling cipher. While working to solve the enigmatic riddle, Langdon is stunned to discover it leads to a trail of clues hidden in the works of Da Vinci -- clues visible for all to see -- yet ingeniously disguised by the painter. Langdon joins forces with a gifted French cryptologist, Sophie Neveu, and learns the late curator was involved in the Priory of Sion -- an actual secret society whose members included Sir Isaac Newton, Botticelli, Victor Hugo, and Da Vinci, among others. In a breathless race through Paris, London, and beyond, Langdon and Neveu match wits with a faceless powerbroker who seems to anticipate their every move. Unless Langdon and Neveu can decipher the labyrinthine puzzle in time, the Priory's ancient secret -- and an explosive historical truth -- will be lost forever. THE DA VINCI CODEheralds the arrival of a new breed of lightning-paced, intelligent thriller…utterly unpredictable right up to its stunning conclusion. From the Hardcover edition.

Harvard symbologist Robert Langdon and French cryptologist Sophie Neveu work to solve the murder of an elderly curator of the Louvre, a case which leads to clues hidden in the works of Da Vinci and a centuries-old secret society.

Robert Langdon, the Harvard symbologist from Brown's Angels and Demons, is back in this amazing sequel. In Paris for a lecture, Langdon is summoned in the middle of the night to meet the head of the French police at the Louvre. The museum's curator has been found dead in a secure section of the gallery, with a message by his body leading to a baffling series of clues hidden in the works of Leonardo da Vinci. In addition, the curator left a specific message to find Langdon. While the police think Langdon is their culprit, he teams up with a French cryptologist to uncover the truth about the hidden messages. The answers lead to discovery of a shocking historical fact, and certain people will do anything to keep it a secret. Brown solidifies his reputation as one of the most skilled thriller writers on the planet with his best book yet, a compelling blend of history and page-turning suspense. This masterpiece should be mandatory reading. Highly recommended for all public libraries. [Previewed in Prepub Alert, LJ 11/1/02.]-Jeff Ayers, Seattle P.L. (c) Copyright 2010. Library Journals LLC, a wholly owned subsidiary of Media Source, Inc. No redistribution permitted.

Brown's latest thriller (after Angels and Demons)is an exhaustively researched page-turner about secret religious societies, ancient coverups and savage vengeance. The action kicks off in modern-day Paris with the murder of the Louvre's chief curator, whose body is found laid out in symbolic repose at the foot of the Mona Lisa. Seizing control of the case are Sophie Neveu, a lovely French police cryptologist, and Harvard symbol expert Robert Langdon, reprising his role from Brown's last book. The two find several puzzling codes at the murder scene, all of which form a treasure map to the fabled Holy Grail. As their search moves from France to England, Neveu and Langdon are confounded by two mysterious groups-the legendary Priory of Sion, a nearly 1,000-year-old secret society whose members have included Botticelli and Isaac Newton, and the conservative Catholic organization Opus Dei. Both have their own reasons for wanting to ensure that the Grail isn't found. Brown sometimes ladles out too much religious history at the expense of pacing, and Langdon is a hero in desperate need of more chutzpah. Still, Brown has assembled a whopper of a plot that will please both conspiracy buffs and thriller addicts. (Mar. 18) (c) Copyright PWxyz, LLC. All rights reserved

In a two-day span, American symbologist Robert Langdon finds himself accused of murdering the curator of the Louvre, on the run through the streets of Paris and London, and teamed up with French cryptologist Sophie Neveu to uncover nothing less than the secret location of the Holy Grail. It appears that a conservative Catholic bishop might be on the verge of destroying the Grail, which includes an alternate history of Christ that could bring down the church. Whoever is ordering the deaths of the Grail's guardians--modern-day members of an ancient society descended from the famed Knights Templar--must be stopped before the treasure is lost forever. To do so, Langdon and Neveu have to solve a series of ciphers and riddles while evading a tireless French police commander and a ruthless albino monk. Despite being hampered by clunky flashback sequences and place descriptions that read like tourist brochures, the story is full of brain-teasing puzzles and fascinating insights into religious history and art. Ultimately, Brown's intricate plot delivers more satisfying twists than a licorice factory. FrankSennett.
More book reviews at iDreamBooks.com