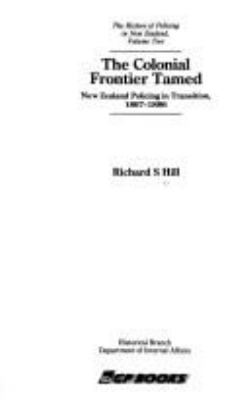 "Being the New Zealand Police was a challenging task in the second half of the twentieth century. The period covered by this book saw major change and modernisation. The author explores the ways in which the police have overhauled their management structure repeatedly since the 1940s and shows how they have often struggled to position themselves within the modern public sector." "There is much of interest to the general reader here - the 1951 waterfront lockout, the growing role of women in the force, the Crewe murders, the police view of the Springbok Tour in 1981, the development of forensic sciences and communications systems, the emergence of specialist squads, the role of police in Search and Rescue - and the book often sheds new light on recent history."--BOOK JACKET.

"Published in association with the New Zealand Police and Ministry for Culture and Heritage"--T.p. verso.