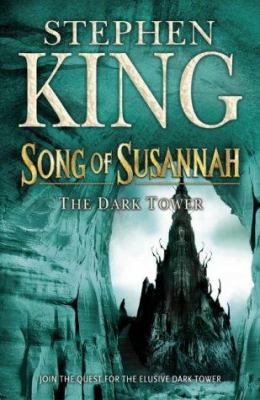 Genre/Form: Horror fiction. | Fantasy fiction.DDC classification: KIN
Contents:
Beamquake -- Persistence of magic -- Trudy and Mia -- Susannah's Dogan -- Turtle -- Castle allure -- Ambush -- Game of toss -- Eddie bites his tongue -- Susannah-Mio, divided girl of mine -- Writer -- Jake and Callahan -- "Hile, Mia, Hile, mother" -- Pages from a writer's journal.
Subject: Roland Deschain, gunslinger, hero, continues his perilous adventuresin search of the key to the quest that will define his life. Roland's loyal followers Jake, Father Callahan and Oy set out to break Susannah's dat with destiny in New York. Meanwhile, Roland and Eddie brave the state of Maine in the summer of 1977. It is a frightful world where bullets are flying . --back cover.
Tags from this library: No tags from this library for this title. Log in to add tags.
Fiction notes: Click to open in new window

The sixth volume in THE DARK TOWER series - the most anticipated series of publications in Stephen King's legendary career - THE DARK TOWER VI; SONG OF SUSANNAH is a pivotal instalment in the epic saga. It provides the key to the quest that defines Roland's life.

In the next part of their journey to the tower, Roland and his band of followers face adversity from every side: Susannah Dean has been taken over by a demon-mother and uses the power of Black Thirteen to get from the Mid-World New York City. But who is the father of her child? And what role will the Crimson King play?

Roland sends Jake to break Susannah's date with destiny, while he himself uses 'the persistence of magic' to get to Maine in the Summer of 1977. It is a terrible world: for one thing it is real and bullets are flying. For another, it is inhabited by the author of a novel called SALEM'S LOT.

SONG OF SUSANNAH is driven by revelation and by suspense. It continues THE DARK TOWER series seamlessly from WOLVES OF THE CALLA and the dramatic climax will leave readers desperate to read the quest's conclusion.

Sequel to: Wolves of the Calla.

Followed by: The dark tower.

Roland Deschain, gunslinger, hero, continues his perilous adventuresin search of the key to the quest that will define his life. Roland's loyal followers Jake, Father Callahan and Oy set out to break Susannah's dat with destiny in New York. Meanwhile, Roland and Eddie brave the state of Maine in the summer of 1977. It is a frightful world where bullets are flying . --back cover.

This summer promises to be marked by a growing sense of anticipation for Dark Tower fans, as the climax to the tale with which King has tantalized readers for nearly a quarter of a century approaches. Close on the heels of Wolves of the Calla, this penultimate volume winds its way nimbly through the time-space continuum. In classic hero-journey fashion, Roland Deschain returns with his ka-tet of gunslingers from the ordeals they faced in Mid-World to a 1999 version of New York City, where the conclusion to Susannah Dean's uncertain pregnancy and, it would seem, the Dark Tower itself awaits them. Father Callahan continues, in comic parallel, to search for Stephen King-a plot line ripe with the wry satire of the relationship that King fashions between a writer and his work. In the end, King has his readers where he wants them: breathlessly waiting for more. (Illustrations not seen.) For all libraries.-Nancy McNicol, Ora Mason Lib., West Haven, CT (c) Copyright 2010. Library Journals LLC, a wholly owned subsidiary of Media Source, Inc. No redistribution permitted.

There's something about a crippled, black, schizophrenic, civil rights activist-turned-gunslinger whose body has been hijacked by a white, pregnant demon from a parallel world that keeps a seven-volume story bracingly strong as it veers toward its Armageddon-like conclusion. When Susannah Dean is transported via a magic door on the outskirts of Calla Bryn Sturgis (the scene of much of The Dark Tower V: Wolves of the Calla) to New York City in the summer of 1999, the "demon-mother" who possesses her, Mia, has only one thing on her mind. She must give birth to her "chap" at a predetermined location in Manhattan's East 60s, as instructed by the henchmen or "Low Men" of the evil Crimson King. Pressed for time, Father Callahan, preteen Jake and talking pet "billy-bumbler" Oy follow Susannah and Mia's trail in an effort to prevent an act that would quicken the destruction of the Dark Tower and, in turn, of all worlds. Meanwhile, gunslingers Roland and Eddie travel to 1977 Maine in search of bookstore owner Calvin Tower, who is being hunted down by mobster Enrico Balazar and his gang, who first appeared in Eddie's version of New York in The Drawing of the Three. Avid readers of the series will either be completely enthralled or extremely irritated when, in a gutsy move, the author weaves his own character into this unpredictable saga, but either way there's no denying the ingenuity with which King paints a candid picture of himself. The sixth installment of this magnum opus stops short with the biggest cliffhanger of King's career, but readers at the edge of their seats need only wait a few short months (Dark Tower VII: The Dark Tower will be released on September 21) to find out how and if King's fictional universe will come to an end. 10 full-color illus. not seen by PW. Agent, Arthur Greene. (June 8) (c) Copyright PWxyz, LLC. All rights reserved

King's epical Dark Tower hastens to a close, and its penultimate volume is one of the speediest. The gunslingers of Mid-World and other alternate Earths have defeated The Wolves of the Calla0 (2003) but lost one of their number. Susannah Dean, nee Odetta Holmes, lacking her lower legs after a minion of the Satan of Mid-World, the Crimson King, pushed her in front of a subway train, and whose personality is sometimes split between black bourgeoise Odetta and viciously paranoiac Detta Walker, has been taken over by the spirit Mia to be the body in which Mia will gestate a boy who will eventually kill head gunslinger Roland. The child is to be born in New York in 1999, which is where Susannah-Mia repairs through one of the doors between worlds. The other gunslingers pursue through the same door, but only 11-year-old Jake Chambers, accompanied by former 'Salems' Lot priest Don Callahan, get to New York. Roland and Susannah's husband, Eddie Dean, tumble into an ambush in New England in 1977. Each chapter--called a stanza and ending with two songlike quatrains--advances one subset of gunslingers' progress. King keeps us on tenterhooks throughout--and leaves us there. Before quite departing, he tacks on a clever coda about the gradual creation of the Dark Tower--but in which world? The series concludes with The Dark Tower0 in September. --Ray Olson Copyright 2004 Booklist
More book reviews at iDreamBooks.com