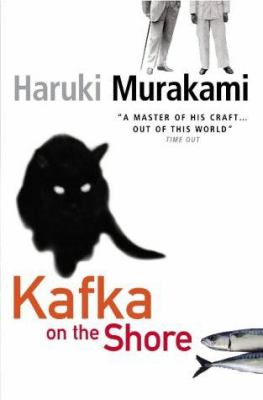 Kafka on the shore / Haruki Murakami ; translated from the Japanese by Philip Gabriel.

A stunning work of art, the New York Observer wrote of The Wind-Up Bird Chronicle, that bears no comparisons, and this is also true of this magnificent new novel, which is every bit as ambitious, expansive and bewitching. A tour-de-force of metaphysical reality, Kafka on the Shore is powered by two remarkable characters. At fifteen, Kafka Tamura runs away from home, either to escape a gruesome oedipal prophecy or to search for his long-missing mother and sister. And the aging Nakata, who never recovered from a wartime affliction, finds his highly simplified life suddenly upset. by vivid accomplices and mesmerizing events. Cats and people carry on conversations, a ghostlike pimp employs a Hegel-quoting prostitute, a forest harbors soldiers apparently unaged since World War II, and rainstorms of fish fall from the sky. There is a brutal murder, with the identity of both victim and perpetrator a riddle. Yet this, like everything else, is eventually answered, just as the entwined destinies of Kafka and Nakata are gradually revealed, with one escaping his fate entirely and the other given a fresh start on his own.

In this highly surrealistic offering from distinguished Japanese author Murakami (After the Quake: Stories), two seemingly unrelated stories cleverly told in alternating chapters eventually collide and meld. In the first story, a 15-year-old assumes the alias Kafka Tamura and runs away from his home in Tokyo to Takamatsu. While there, he is befriended by a young girl, hides out in a private library, and seemingly falls in love with the library director. Meanwhile, the elderly, feeble-minded Mr. Nakata, who can talk with cats, encounters a series of unusual characters with names like Johnny Walker and Colonel Sanders. Later ensnared in a murder, Nakata leaves town and is befriended by a young man who becomes his invaluable companion. Kafka and Nakata are brought together when Nakata is compelled to search for the "entrance stone" that connects their parallel worlds. Parts of Murakami's story are violently gruesome and sexually explicit, and the plot line following Nakata is rather eerie and disturbing. Yet the bulk of this narrative is erudite, lyrical, and compelling; followers of Murakami's work should approve. Recommended for larger fiction collections.-Shirley N. Quan, Orange Cty. P.L., Santa Ana, CA (c) Copyright 2010. Library Journals LLC, a wholly owned subsidiary of Media Source, Inc. No redistribution permitted.

Previous books such as The Wind-Up Bird Chronicle and Norwegian Wood have established Murakami as a true original, a fearless writer possessed of a wildly uninhibited imagination and a legion of fiercely devoted fans. In this latest addition to the author's incomparable oeuvre, 15-year-old Kafka Tamura runs away from home, both to escape his father's oedipal prophecy and to find his long-lost mother and sister. As Kafka flees, so too does Nakata, an elderly simpleton whose quiet life has been upset by a gruesome murder. (A wonderfully endearing character, Nakata has never recovered from the effects of a mysterious World War II incident that left him unable to read or comprehend much, but did give him the power to speak with cats.) What follows is a kind of double odyssey, as Kafka and Nakata are drawn inexorably along their separate but somehow linked paths, groping to understand the roles fate has in store for them. Murakami likes to blur the boundary between the real and the surreal-we are treated to such oddities as fish raining from the sky; a forest-dwelling pair of Imperial Army soldiers who haven't aged since WWII; and a hilarious cameo by fried chicken king Colonel Sanders-but he also writes touchingly about love, loneliness and friendship. Occasionally, the writing drifts too far into metaphysical musings-mind-bending talk of parallel worlds, events occurring outside of time-and things swirl a bit at the end as the author tries, perhaps too hard, to make sense of things. But by this point, his readers, like his characters, will go just about anywhere Murakami wants them to, whether they "get" it or not. Agent, Amanda Urban at ICM. 60,000 first printing. (Jan. 24) (c) Copyright PWxyz, LLC. All rights reserved

Acclaimed Japanese novelist Murakami ( The Wind-Up Bird Chronicle0 , 1997, among others) 0 navigates the surreal world in this tale of two troubled souls whose lives are entwined by fate. Fifteen-year-old Tokyo resident Kafka Tamura runs away from home to escape a murderous curse inflicted by his famous sculptor father. Elderly Satoru Nakata wanders his way through each day after a mysterious childhood accident turns his mind into a blank slate. The relationship between the strange strangers isn't revealed until the end of the novel, whose precarious scenarios include a grisly killing, a rainstorm of leeches, and a freezer lined with the severed heads of cats ("Cut-off heads of all colors and sizes, arranged on three shelves like oranges at a fruit stand"). The book's title comes from a painting, poem, and song linked to a tormented library matron, who inhabits a limbo between the present and past. Replete with riddles, exhaustingly eccentric characters (a pimp dressed as Colonel Sanders, a Hegel-quoting whore), and imagery ranging from the sublime to the grotesque, Murakami's literary high-wire acts have earned him both boos and ahs from connoisseurs of contemporary fiction. What side you come down on depends on your predilection for the perverse. --Allison Block Copyright 2004 Booklist

Two mysterious quests form the core of Murakami's absorbing seventh novel, whose encyclopedic breadth recalls his earlier successes, A Wild Sheep Chase (1989) and The Wind-Up Bird Chronicle (1997). In the first of two parallel narratives, 15-year-old Kafka Tamura drops out of school and leaves the Tokyo home he shares with his artist-sculptor father, to seek the mother and sister who left them when Kafka was four years old. Traveling to the small town of Takamatsu, he spends his days at a free library, reconnects with a resourceful older girl who becomes his de facto mentor, and begins to reenact the details of a mysterious "incident" from more than 60 years ago. In 1944, a group of 16 schoolchildren inexplicably "lost consciousness" during an outing in a rural mountain area. Only one of them, Satoru Nakata, emerged from the incident damaged--and it's he who, decades later, becomes the story's second protagonist: a childlike, scarcely articulate, mentally challenged sexagenarian who is supported by a possibly guilty government's "sub city" and possesses the ability to hold conversations (charmingly funny ones) with cats. With masterly skill and considerable subtlety, Murakami gradually plaits together the experiences and fates of Kafka and Nakata, underscoring their increasingly complex symbolic significance with several dazzling subplots and texts: a paternal prophecy echoing the Oedipus legend (from which Kafka also seeks escape); a faux-biblical occurrence in which things that ought not to be in the skies are raining down from them; the bizarre figures of a whore devoted to Hegel's philosophy; and an otherworldly pimp whose sartorial affectations cloak his true menacing nature; a ghostly forest into which Russian soldiers inexplicably disappear; and--in glancing allusions to Japanese novelist Natsume Soseki--a clever homage to that author's beguiling 1905 fantasy, I Am a Cat. Murakami is of course himself an immensely reader-friendly novelist, and never has he offered more enticing fare than this enchantingly inventive tale. A masterpiece, entirely Nobel-worthy. Copyright ©Kirkus Reviews, used with permission.
More book reviews at iDreamBooks.com