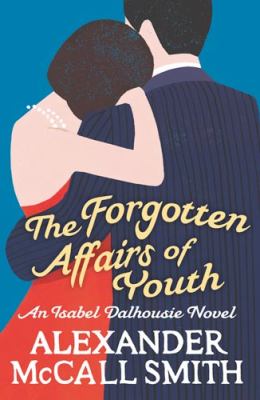 Genre/Form: Detective and mystery fiction.DDC classification: 823/.914
Contents:
Jane, a visiting academic adopted and sent to Australia as a baby, asks Isabel for help in tracing her Scottish origins. But the search turns troubling, and Isabel can hardly prevent herself from interfering in family secrets.
Subject: The continuing adventures from Isabel Dalhousie, Edinburgh philosopher and curious observer of the behaviour of her fellow man.
Tags from this library: No tags from this library for this title. Log in to add tags.
Fiction notes: Click to open in new window

The wonderful new Isabel Dalhousie. As the editor of an applied ethics journal, Isabel Dalhousie is usually tucked away in her editorial office, in the comfortable Edinburgh house she shares with her fiance and their young son, and does not often meet many fellow philosophers. But while helping in the delicatessen owned by her niece, Cat, she meets Jane Cooper, an Australian philosopher who is spending a sabbatical in Scotland. Isabel learns that Jane needs to find out something about her past. Jane was born in Scotland but taken to Australia as a baby by her adoptive parents. She knows who her mother is, but her father's identity is still a mystery. Can Isabel help Jane uncover this important and potentially unsettling information? And in Isabel's own life, there is the ever-present question of marriage, and also the perennially difficult issue of her relationship with Cat, whose choice of men is as dubious as ever.

Jane, a visiting academic adopted and sent to Australia as a baby, asks Isabel for help in tracing her Scottish origins. But the search turns troubling, and Isabel can hardly prevent herself from interfering in family secrets.

The continuing adventures from Isabel Dalhousie, Edinburgh philosopher and curious observer of the behaviour of her fellow man.

In this latest installment of McCall Smith's Isabel Dalhousie series, when an Australian philosopher named Jane Cooper comes to Edinburgh, she asks Isabel to trace her family history. Jane knows almost nothing of the woman who gave her up for adoption 40 years earlier, except her name and that she is deceased. Isabel gladly jumps in to help, eventually finding former college friends, boyfriends, and lovers. Narrator Davina Porter-who has read many McCall Smith titles-is, as always, perfection. She rolls out a Scottish brogue and a variety of regional accents, renders an acceptable Australian accent, and creates believable voices for the novel's many characters. Her voice is soft and smooth, pleasingly musical, and endlessly enthralling. The story doesn't rely on action-packed thrills or volatile emotional drama, but on the thought-provoking and touching contemplations of Smith's protagonist-and for this Porter is the ideal narrator, making for a gentle but entertaining listen. A Pantheon hardcover. (Dec.) (c) Copyright PWxyz, LLC. All rights reserved.

*Starred Review* In Taking Tea, McCall Smith says, I get accused of being a Utopian writer. People say I see the world through rosy spectacles. This criticism might seem best to apply to the Isabel Dalhousie series, of which this novel is the eighth. Isabel is the fortysomething, well-heeled editor of a philosophical review in Edinburgh. Early in the tale, as she's mentally recounting her blessings a baby beyond the age when she could expect one, a handsome fiance much younger than she, financial and professional independence Isabel stops herself, fearing Nemesis. And this is where the Utopian criticism falls apart in the Dalhousie series and in Smith's other works. He focuses on the rose, surely, of well-ordered lives and in his good, striving main characters, but the worm is always on the rose, or crawling nearby (especially in the No. 1 Ladies' Detective Agency novels). Isabel does, after all, run the Review of Applied Ethics and confronts daunting ethical dilemmas, not just in the philosophical-ethical puzzles of her journal but also as she tries to help people who are caught up in tricky choices, whose unseen consequences can make or break the rest of their lives.This totally absorbing novel has as its primary focus the grip of the past, as Isabel helps a woman given up for adoption find her biological father. Isabel is everything you'd want in a philosopher, but she is also quirky and witty and made more human by the longing she still sometimes feels for a beautiful but bad love in her past. Far from being Utopian, The Forgotten Affairs of Youth is filled with both spires and spikes, like Edinburgh itself. HIGH-DEMAND BACKSTORY: McCall Smith is remarkably prolific, but the number of his books never seems to saturate his market. His adoring readers will queue up for this one, as they always do.--Fletcher, Connie Copyright 2010 Booklist

Review of Applied Ethics, accepts on his own initiative an essay written by his nephew Max? And where did Charlie, the 2-year-old son of Isabel and her fianc, bassoonist Jamie, pick up the nasty word he was heard using in his playgroup? All these questions, however, take a back seat to Australian philosopher Jane Cooper's request that Isabel help her find the man who impregnated her mother, Clara Scott, while she was still at university. Clara, long dead in a car crash, can be no help, and Isabel's far from certain that the man who took such pains to avoid leaving a paper trail so long ago will want to be part of Jane's life now. Isabel agrees to investigate anyway because it's the right thing to do, and then has to deal with the quest's unexpected complications using exactly the same moral lodestar. The woolliest of Isabel's eight adventures (The Charming Quirks of Others, 2010, etc.) at times seems little more than a catalogue of its heroine's always principled errors and misjudgments. But it shows again, and handsomely, the most lovable feature of Edinburgh: "Everything isconnected somehow."]] Copyright Kirkus Reviews, used with permission.
More book reviews at iDreamBooks.com