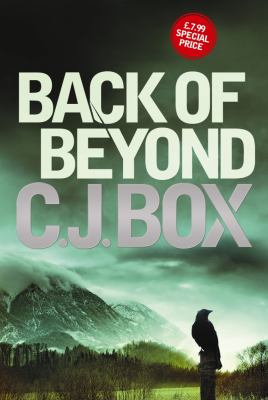 A cabin smolders in the forest. In the remains of the kitchen, a table set for two; next door, the remains of a single body. Alerted by hikers, Detective Cody Hoyt is called to the scene. While a brilliant cop, Cody is also an alcoholic struggling with two months of sobriety and it doesn't help that the body in the cabin is his AA sponsor Hank Winters. It looks like the suicide of a man who's fallen off the wagon, but Cody knows Hank better than that. He's convinced its foul play. But after years of bad behavior directly related to his drinking, Cody has few friends left in the department. And when he shoots and wounds the county coroner in a botched stakeout he is suspended from duty. But Hank was one of the few friends Cody had left and he's determined to find his killer, badge or no badge. Who was at Hank's cabin? Data pulled from Hank's fire-damaged hard drive leads Cody to a website running wilderness adventures deep into the most remote parts of Yellowstone National Park. Their big trip of year has just left - a two-week horseback journey into the wild. The very same trip that Cody's estranged teenage son, Justin, has signed up for. Cody has no choice but to trek deep into the wild himself in pursuit of his son and the truth about Hank. In America's greatest wilderness, Cody is on his own, he's out of time, he's in too deep, he's in the Back of Beyond.

Alerted by hikers, Detective Cody Hoyt is called to the scene. While a brilliant copy, Cody is also an alcoholic struggling with two months of sobriety and it doesn't help that the body in the cabin is his AA sponsor Hank Winters. It looks like the suicide of a man who's fallen off the wagon, but Cody knows Hank better than that. He's convinced it's foul play. directly related to his drinking, Cody has few friends left in the department. And when he shoots and wounds the county coroner in a botched stakeout he is suspended from duty. But Hank was one of the few friends Cody had left and he's determined to find his killer, badge or no badge.

A disgraced cop with a history of alcoholism, Cody Hoyt is also a bulldog investigator. When his AA sponsor turns up dead, Cody determines that the killer is one of 14 dudes on a weeklong expedition in Yellowstone National Park; Cody's son is also on the trip. While struggling to figure out who and why, and where they are in the wilderness, Cody also searches for redemption on behalf of his friend. Following 2008's Blue Heaven, this is the author's second stand-alone thriller to take place in the wild. As Box has shown in his Joe Pickett series, he knows life and death in the backcountry like few other writers today. [125,000-copy first printing; ten-city tour; see Prepub Alert, 3/14/11.] (c) Copyright 2011. Library Journals LLC, a wholly owned subsidiary of Media Source, Inc. No redistribution permitted.

In this sprawling, ambitious stand-alone from Edgar-winner Box (Three Weeks to Say Goodbye), Cody Hoyt, an investigator in the sheriff's department of Montana's Lewis and Clark County, and a (barely) recovering alcoholic, goes in search of the man who burned his Alcoholics Anonymous sponsor to death. What at first appears to be a random crime broadens in scope to include multiple murders, the unresolved disappearance of a private plane in Yellowstone National Park, and a Mexican drug lord. The action culminates with a chase into the "back of beyond," a remote wilderness area of Yellowstone, where Hoyt's son, Justin, who's in his late teens, is on an expedition with his new stepfather. Box makes the rugged expanses of the American West even more palpably compelling than his largely appealing characters; he provides backstories for even the most minor ones. This padding and some improbable plot twists tend to undercut the suspense, but Box's many fans won't mind a bit. 125,000 first printing; 10-city author tour. (Aug.) (c) Copyright PWxyz, LLC. All rights reserved.

Box built his reputation with his ongoing series about Joe Pickett, a Wyoming game warden who's a bad shot and a good guy. But stand-alone thrillers have given Box room to experiment. His third features a cop, Cody Hoyt, who is everything Pickett is not. An alcoholic smoker with a short fuse, Hoyt has left his previous jobs and his family in shambles. When his AA sponsor is murdered, however, his stubborn single-mindedness may just be his saving grace. The trail leads Hoyt, decidedly not an outdoorsman, into the Yellowstone backcountry, where others are in danger and for a surprising reason. Part of the fun here is seeing Box take familiar elements from his other fiction and rework them into something different. The plot is a bit more tangled than in his standout stand-alone, Blue Heaven (2008), and the role played by Cody's distrustful partner, Larry, doesn't quite work as well as it could. But it's still terrifically entertaining stuff that comes together with a bang in the end. We almost hate to say this, but Hoyt has series potential, too. . HIGH-DEMAND BACKSTORY: Box is big news and with a 125,000-copy first printing, a 10-city tour, and a major marketing push, this book will do business.--Graff, Kei. Copyright 2010 Booklist

A second standalone from the chronicler of Twelve Sleep County Game Warden Joe Pickett (Cold Wind,2011, etc.) takes a Montana cop deep into the wilds of Yellowstone National Park in the hope of protecting his teenaged son from a determined killer.The evidence says that Hank Winters died in a house fire shortly after downing several stiff drinks. But Cody Hoyt, an investigator for the Lewis and Clark County Sheriff's Department, doesn't believe the evidence. Hank was Cody's AA sponsor, and he knows that although he might have fallen off the wagon himself, his adamantine mentor never would have done so. If Hank didn't drink from the uncapped flask found nearby, then someone must have planted itand that rules out both accident and suicide. Kicked off the case, Cody still keeps working it with the help of his friend and colleague Larry Olson, who soon uncovers a nationwide chain of murders with a remarkably similar m.o. Even more chilling, however, is a clue that convinces Cody that the killer is headed to a backcountry expedition through Yellowstone Park, the very same place Cody's son Justin has been taken by His Richness Walt Franck, the developer who's engaged to Cody's ex Jenny. As Cody laboriously makes his way closer to the park, dodging suspicious cops and murder attempts, Box keeps cutting away to the expedition organized by outfitter Jed McCarthy, whose party of a dozen amateur adventurers is methodically whittled away one by one. Can Cody, a refugee from the Denver PD who's no great outdoorsman himself, catch up with the group and identify the killer in time to save his son's life?Once again, Box provides the complete suspense package: unobtrusively slick detection, buckets of surprises and mounting thrills, all amid his trademark settings in the majestic high country.]] Copyright Kirkus Reviews, used with permission.
More book reviews at iDreamBooks.com