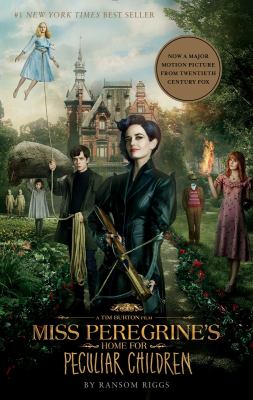 Genre/Form: Detective and mystery fiction. | Young adult fiction. | Fantasy fiction. | Teen fiction.DDC classification: [Fic] Summary: After a family tragedy, Jacob feels compelled to explore an abandoned orphanage on an island off the coast of Wales, discovering disturbing facts about the children who were kept there.
List(s) this item appears in: TV and Movies
Tags from this library: No tags from this library for this title. Log in to add tags.
Fiction notes: Click to open in new window

A mysterious island. An abandoned orphanage. And a strange collection of very curious photographs. It all waits to be discovered in Miss Peregrine's Home for Peculiar Children, an unforgettable novel that mixes fiction and photography in a thrilling reading experience. As our story opens, a horrific family tragedy sets sixteen-year-old Jacob journeying to a remote island off the coast of Wales, where he discovers the crumbling ruins of Miss Peregrine's Home for Peculiar Children. As Jacob explores its abandoned bedrooms and hallways, it becomes clear that the children who once lived here-one of whom was his own grandfather-were more than just peculiar. They may have been dangerous. They may have been quarantined on a desolate island for good reason. And somehow-impossible though it seems-they may still be alive.

This movie tie-in edition will feature movie art on the cover.

After a family tragedy, Jacob feels compelled to explore an abandoned orphanage on an island off the coast of Wales, discovering disturbing facts about the children who were kept there.

Sixteen-year-old Jacob Portman no longer believes the stories his grandfather told him when he was a little boy. These are obviously fairy tales about children with mysterious abilities, such as a girl who could levitate and a boy with bees inside him, and not real memories from his grandfather's childhood. Grandpa's sepia-toned photographs of his strange friends also seem fake to Jacob. However, when he gets a chance to visit the island where the stories took place, he can't resist delving into his grandfather's past. Could these odd children really have existed? VERDICT An original work that defies categorization, this first novel should appeal to readers who like quirky fantasies. Suitable for both adults and a YA audience. Riggs includes many vintage photographs that add a critical touch of the peculiar to his unusual tale.-Laurel Bliss, San Diego State Univ. Lib. (c) Copyright 2011. Library Journals LLC, a wholly owned subsidiary of Media Source, Inc. No redistribution permitted.

Riggs's atmospheric first novel concerns 16-year-old Jacob, a tightly wound but otherwise ordinary teenager who is "unusually susceptible to nightmares, night terrors, the Creeps, the Willies, and Seeing Things That Aren't Really There." When Jacob's grandfather, Abe, a WWII veteran, is savagely murdered, Jacob has a nervous breakdown, in part because he believes that his grandfather was killed by a monster that only they could see. On his psychiatrist's advice, Jacob and his father travel from their home in Florida to Cairnholm Island off the coast of Wales, which, during the war, housed Miss Peregrine's Home for Peculiar Children. Abe, a Jewish refugee from the Nazis, lived there before enlisting, and the mysteries of his life and death lead Jacob back to that institution. Nearly 50 unsettling vintage photographs appear throughout, forming the framework of this dark but empowering tale, as Riggs creates supernatural backstories and identities for those pictured in them (a boy crawling with bees, a girl with untamed hair carrying a chicken). It's an enjoyable, eccentric read, distinguished by well-developed characters, a believable Welsh setting, and some very creepy monsters. Ages 12-up. (June) (c) Copyright PWxyz, LLC. All rights reserved.

Gr 9 Up-Jacob, 17, spends his time listening to his Grandpa Portman's fantastical stories about the monsters and peculiar children with whom he was raised after being saved from the Nazi death camps during World War II. After years of hearing these tales, Jacob decides that they are just fairy tales until he receives a desperate phone call from his dying grandfather. The teen rushes to his side only to have him utter a warning which sends him to a remote island off Wales to find the home in which the elderly man was raised. He discovers that Miss Peregrine's Home for Peculiar Children has been abandoned for a long time. At this point, the story shifts to a fantastical mystery mixing the past with the present. Jacob enters the loop and meets the bird-both part of Grandpa's warning. He meets the peculiar children and learns more about his grandpa and his own capabilities to see the monsters. Ransom Riggs's novel (Quirk Books, 2011) features a twisting plot, adventure, mystery, fantasy, and a light love affair that will intrigue listeners. Told through Jacob's perspective, narrator Jesse Bernstein skillfully juggles a variety of voices of all ages as well as American and English accents. Have the book available so listeners can peruse the photos. The book's open-ended conclusion hints at a sequel.-Karen Alexander, Lake Fenton High School, Linden, MI (c) Copyright 2012. Library Journals LLC, a wholly owned subsidiary of Media Source, Inc. No redistribution permitted.

On the brink of his sixteenth birthday, something terrible happens to Jacob something so terrible that it splits his life into two parts: Before and After. Before, he was an ordinary young man with a peculiar but doting grandfather. After, he discovers he isn't so ordinary after all. Nor are th. peculiar childre. he meets at Miss Peregrine's home. Riggs' debut uses the framework of a horror novel to tell a more far-reaching tale with symbolic overtones of the Holocaust. Though the author's skill does not always match his ambition his pacing is particularly uneven his premise is clever, and Jacob and the children are intriguing characters. The book is made even more intriguing by the inclusion of a number of period photographs that seem almost Victorian in character and that expand the oddness of the proceedings. An open ending suggests the possibility of a sequel.--Cart, Michae. Copyright 2010 Booklist
More book reviews at iDreamBooks.com