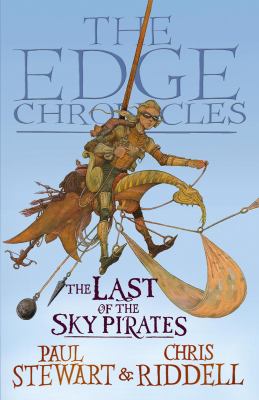 The last of the sky pirates / Paul Stewart & Chris Riddell.

Rook Barkwater dreams of becoming a librarian knight. Breaking all the rules, he sets out on a perilous journey to the Free Glades and beyond. Then, buried in the heart of the Deepwoods, Rook encounters a mysterious character -- the last sky pirate -- and is thrust into a bold adventure that dares to challenge the might of the dread Guardians of the Night...
A magnificently inventive and brilliantly illustrated tale filled with amazing characters and creatures -- from bloodthirsty muglumps to banderbears, spindlebugs and shrykes.

In the fifth entry in the Edge Chronicles by Paul Stewart and Chris Riddell, The Last of the Sky Pirates, Rook Barkwater, selected to study as an apprentice in the Deepwoods, hooks up with sky pirate Captain Twig, introduced in the launch title, Beyond the Deepwoods, bringing the series full circle. In a starred review, PW said of the first book, "The narrative will cast a spell over readers from the beginning." (Aug.) (c) Copyright PWxyz, LLC. All rights reserved

Gr 4-7-The Edge is filled with icky monsters, profoundly rotten villains, and shiny striving heroes, all with silly names such as muglumps, Orbix Xaxis, and Rook Barkwater. There are dangers behind every tree, mysterious fogs, stones that fly, and trolls and talking bears. In this fifth volume of the "Chronicles," Rook is a young under-librarian who is sent into the creepy Deepwoods to gather knowledge that might help the noble community of Knight-Librarians battle the evil Guardians of Night for control of the Edge. Sometimes Rook and his allies defeat the gluttonous logworms that devour everything in their path; at other times, the Guardians of the Night throw them into chains. Even Twig, hero of Beyond the Deepwoods, the first volume in the series, reappears to join the fray. Who will win? Does it really matter? These adventures pull readers along, and the pages flip by in no time. Riddell's antique-style illustrations add to the fun, depicting the characters' intricate costumes and crazy modes of transport. There's not a lot of substance here, but fans of Lemony Snicket, the "The Spiderwick Chronicles," and "Harry Potter" will devour it.-Walter Minkel, New York Public Library (c) Copyright 2010. Library Journals LLC, a wholly owned subsidiary of Media Source, Inc. No redistribution permitted.

In Gloamglozer, Quint helps the ruler of Sanctaphrax by undertaking a perilous trip to the core of the floating city where he unwittingly frees a deadly Gloamglozer. In Pirates, Rook makes a dangerous journey to become a librarian knight. In both books, plot development is not the focus, but the details are vivid and the spot art adds mood. [Review covers these Edge Chronicles titles: The Curse of the Gloamglozer and The Last of the Sky Pirates.] (c) Copyright 2010. The Horn Book, Inc., a wholly owned subsidiary of Media Source, Inc. No redistribution permitted. All rights reserved.
More book reviews at iDreamBooks.com