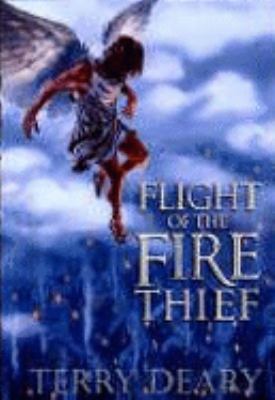 To escape the gods' revenge, Prometheus travels through time to a murky metropolis called Eden City. There he befriends a motley assortment of comic characters and learns what humans have done with his gift of fire.

Followed by: The fire thief fights back.

Gr 4-6-This sequel to The Fire Thief (Kingfisher, 2005) continues the sarcasm-laced tale of the ancient Greek Titan Prometheus, who stole fire from the gods and gave it to humans. The furious Zeus will forgive him only if the Titan can show him a true human hero. In the first book, Prometheus time-travels to the fictional Eden City in 1858, only to discover that the hero he seeks may have lived in the city's past. Now Zeus grows impatient, and has sent his eaglelike Avenger to capture Prometheus. The Avenger is accompanied by the spirits of the Trojan War's Achilles and Paris, plus the monstrous 50-headed Hecatonchires, all fresh from Hades. In the Eden City of 1795, which is under siege by "Wild People" (thinly disguised Native Americans), Prometheus meets Nell Dee, a 12-year-old carnival performer. The two orchestrate a plan to help him escape the Avenger and her to end the town's siege peacefully. Prometheus discovers that the human hero he's been searching for is Nell. The tale will remind readers of both Rick Riordan's "Olympians" series and Terry Pratchett's books, but isn't as successful because of Deary's cynical tone. The story, which toggles between ancient Greece and Eden City, starts out grippingly. But, especially in the Greek chapters, most of the characters spend so much time making anachronistic wisecracks at each other that the book begins to drag.-Walter Minkel, New York Public Library (c) Copyright 2010. Library Journals LLC, a wholly owned subsidiary of Media Source, Inc. No redistribution permitted.

Greek gods meddling in human affairs causes Trojan War figures Achilles and Paris to travel through time to 1795 where their story intersects with that of another Helen. The spunky girl's lively narration includes irreverent footnotes that get a bit tedious. Although it's a second book in a trilogy, this lighthearted fantasy stands on its own. (c) Copyright 2010. The Horn Book, Inc., a wholly owned subsidiary of Media Source, Inc. No redistribution permitted. All rights reserved.
More book reviews at iDreamBooks.com