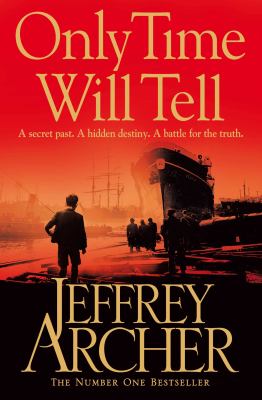 Only time will tell / Jeffrey Archer.

| Great Britain -- Social life and customs -- 1918-1945 -- FictionGenre/Form: General fiction. | Domestic fiction.DDC classification: 823.92 Summary: The epic tale of Harry Clifton's life begins in 1920, with the chilling words, 'I was told that my father was killed in the war.' But it will be another twenty years before Harry discovers how his father really died, which will only lead him to question: who was his father?
List(s) this item appears in: 9. Your Best Reads of 2017
Tags from this library: No tags from this library for this title. Log in to add tags.
Fiction notes: Click to open in new window

The first book in the internationally bestselling Clifton Chronicles from master storyteller Jeffrey Archer"I was utterly hooked. It was an absurdly enjoyable read." Anthony Horowitz, Daily TelegraphThe epic tale of Harry Clifton's life begins in 1919, in the backstreets of Bristol. His father was a war hero, but it will be twenty-one tumultuous years before Harry discovers the truth about how his father really died and if, in fact, he even was his father.Only Time Will Tell takes a cast of memorable characters from the ravages of the Great War to the outbreak of the Second World War, when Harry must decide whether to take his place at Oxford, or join the fight against Hitler's Germany.In Jeffrey Archer's masterful hands, you will be taken on a journey that you won't want to end, even after you turn the last page of this unforgettable yarn, because you will be faced with a dilemma that neither you, nor Harry Clifton could ever have anticipated.Only Time Will Tell is part of The Clifton Chronicles series, but can be enjoyed as a stand-alone novel.THE CLIFTON CHRONICLES SERIESBOOK 1: Only Time Will TellBOOK 2: The Sins of the FatherBOOK 3: Best Kept SecretBOOK 4: Be Careful What You Wish ForBOOK 5: Mightier Than The SwordBOOK 6: Cometh The Hour

Followed by: The sins of the father.

The epic tale of Harry Clifton's life begins in 1920, with the chilling words, 'I was told that my father was killed in the war.' But it will be another twenty years before Harry discovers how his father really died, which will only lead him to question: who was his father?

Internationally best-selling British storyteller Archer (A Prisoner of Birth) launches his most daunting literary project-a five-volume, semiautobiographical, multi-generational epic. In 20-year segments sweeping through the 20th century and into the 21st, Archer's creative page-turner features the precocious Harry Clifton, an intellectually gifted youth from the Bristol dockyards mingling in the grand estate of a millionaire shipping magnate and challenged by secrets, mysteries, growing pains, and life-changing decisions regarding his own paternity and destiny. In this first volume, the memorable cast of heroes and villains takes readers from 1920 to the outbreak of World War II-the first 20 years of Harry's life. The second volume, Tempered by War (coming in 2012), will span the next two decades, and so forth with the remaining three volumes in the series. VERDICT General readers as well as Archer fans will enjoy this unforgettable tale, which abounds with cliff-hangers that propel its intriguing and intricate plot (in the style of his Kane and Abel). Order multiples. Readers will eagerly anticipate the upcoming volumes.[250,000-copy first printing; major marketing campaign.]-Jerry P. Miller, Cambridge, MA (c) Copyright 2011. Library Journals LLC, a wholly owned subsidiary of Media Source, Inc. No redistribution permitted.

With his latest, Archer (Honor Among Thieves) delivers another page-turning, heart-stopping saga, with delightful twists, and a surprise ending. This first title from the Clifton Chronicles introduces readers to Harry Clifton, a boy growing up in Bristol whose father mysteriously died a full year before his birth, supposedly killed in WWI. Though Harry dreams of becoming a stevedore like his Uncle Stan, crazy Old Jack Tar shows Harry the truths of the stevedore life and becomes his surrogate father. After hearing an angelic treble voice, Harry decides to join the choir and learns to read. The choir in turn gains him a scholarship to boys' boarding school St. Bede's-a gateway to the life his mother wants for him, far from the harbor and shipping industry. He meets scholarly Deakins and wealthy Giles Barrington, who become his best friends, and the three strive to gain acceptance to Bristol Grammar School. Though Giles' father has a particular aversion to Harry, the boys' friendship proves stronger than any paternal dictates. While Archer hasn't revealed how many books will make up this saga (which will span one hundred years), readers will surely wait for the next with bated breath. (Sept.) © Copyright PWxyz, LLC. All rights reserved.

Archer introduces an ambitious new historical series, the Clifton Chronicles, and a compelling new character. The series will cover an entire century, but this volume spans two decades, 1920-40. Its central character is young Bristol lad Harry Clifton, fatherless and living in near-poverty conditions, who thanks to the sacrifices of his devoted mother winds up at Oxford University. It sounds like a simple enough story, but Archer, no stranger to thematic complexity, packs the novel with intrigue, mystery, and heartrending revelations. He also tells the tale in a slightly unconventional manner, eschewing straight chronology and devoting sections to several of the main characters Harry, Harry's mother, and a powerful businessman with ties to Harry's family, among others and examining the same period of time through each of the character's eyes. Slowly, like a jigsaw puzzle assembling itself, an entirely different story emerges, one involving Harry's father and the mystery of his sudden disappearance years earlier. What appears at the outset to be a straightforward coming-of-age tale becomes, by the end, a saga of power, betrayal, and bitter hatred. The novel ends on a deliberately dark note, setting the stage for the sequel. Archer is known for thrillers, and while this has some thriller elements, it will also appeal to mainstream historical-fiction fans. An outstanding effort from a reliable veteran. HIGH-DEMAND BACKSTORY: A new series from the perennially best-selling Archer is big news, and St. Martin's will be trumpeting the story at top volume. A 250,000 first printing will provide a well-stocked supply line for hungry fans.--Pitt, David Copyright 2010 Booklist

The first book in a new series, a family saga called The Clifton Chronicles, slated to cover 100 years.It's 1919, and a young woman named Maisie, on a day's holiday in Weston-super-Mare, England, determines to lose her virginity while her future husband spends the afternoon at a pub. And so the subsequent birth of her son Harry raises the first of many questions readers will have little difficulty guessing in advance: Who is Harry's actual father? Harry is told his father died in the Great War, but he's skeptical. His subsequent story spins out in a series of overlapping narratives that lead to a great deal of overlapping details, otherwise known as padding. At the age of 12, Harry demonstrates a keen mind and sings with a rare quality. His mother, of little means but great determination, thus resolves to enroll him in public school where he will receive a strong education. At school, Harry befriends the loyal Giles Barrington, the son of wealthy Hugo Barrington, who, for reasons apparent to everyone but Harry, remains aloof, uneasy and guarded around Harry, especially when, a few years later, Harry takes an interest in Hugo's attractive daughter Emma. Eager to see Harry on to Oxford, Maisie opens a tearoom with great success. In a melodramatic turnlike many here, laid on with a trowel, but with little evocation of time and placesomeone burns Maisie's tearoom to the ground. Maisie suspects Hugo as the culprit and proceeds to blackmail him with information about the fate of her husband. The dastardly Hugo responds to her with a double cross laced with abject physical cruelty. Meanwhile, the Second World War looming, Harry and Emma decide to marry. As they stand before the rector, a guest stands and halts the proceedings.The revelation that follows will elicit few gasps from those who weren't there that day.For all its considerable girth, remarkably thin.]] Copyright Kirkus Reviews, used with permission.
More book reviews at iDreamBooks.com