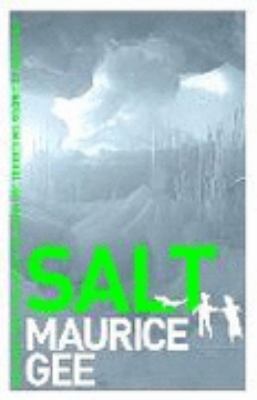 In a dangerous world, Deep Salt strikes terror into the heart of everyone. Hari lives in Blood Burrow, deep in the ruined city of Belong, where he survives by courage and savagery. He is scarred from fighting, he is dangerous and cruel, but he has a secret gift: he can speak with animals. When his father, Tarl, is taken as a slave and sent to the mine known as Deep Salt, from where no worker ever returns, Hari vows to save him. Pearl is from the ruling families, known as Company, which has conquered and enslaved Hari's people. Her destiny involves marriage that will unite her family with that of the powerful and ambitious Ottmar. But Pearl has learned forbidden things from Tealeaf, her maid, and will never submit to a subordinate life. A long journey through the badlands towards Deep Salt finds Pearl and Hari united for a common cause. It soon becomes clear that the survival of their people depends entirely upon the success of Pearl and Hari's mission.

Hari lives in Blood Burrow, deep in the ruined city of Belong, where he survives by courage and savagery. Pearl is from Company, the ruling families, which has conquered and enslaved Hari's people. Hari and Pearl forge an unsual alliance and become reluctant travelling companions, as they undertake a desperate pilgrimage to save the world from a terror beyond their greatest imaginings. Suggested level: intermediate, secondary.

Celebrated New Zealand writer Gee (The Fire Raiser) returns to YA fantasy with this gritty, dystopian tale, the first volume in the Salt Trilogy. Hari lives in Blood Burrow, a hellacious, rat-infested slum. Long ago his dark-skinned people were conquered by Company (a fair-skinned, corporate society from across the ocean) and gradually forced into slavery ("Who joins Company joins history. Your time begins," drones a clerk as new workers are branded with acid). Pearl is a pampered daughter of Company, her only purpose in life to be married off to cement one of her father's political alliances. When both young people, who share rare psychic gifts, revolt against their fates, they find themselves on a desperate journey across a hostile landscape, with the forces of Company at their heels. Later, as Company teeters on the brink of civil war, they must overcome their mutual distrust to save Hari's father from a horrific fate and destroy their enemy's deadly secret weapon. A compelling tale of anger and moral development that also powerfully explores the evils of colonialism and racism. Ages 12-up. (Oct.) (c) Copyright PWxyz, LLC. All rights reserved

Gr 7 Up-In this dystopian fantasy, the people of the burrows are little more than slaves to Company. When his father is taken by the Whips and sent to work in Deep Salt, Hari vows to rescue him. He meets Pearl, the daughter of a Company official, who is fleeing an unwanted marriage, and Tealeaf, Pearl's teacher and companion. They are traveling to Tealeaf's village so that Pearl can develop her gift of mindspeaking. When Tealeaf discovers that Hari is able to speak with animals, she invites him to join them. Hari and Pearl soon discover that the substance being mined drains the workers and leaves them empty husks-and that Company is attempting to form it into a weapon to take over the world. Salt succeeds in being not only plot driven and fast paced, but also character oriented. Readers will appreciate the growing friendship between dark-skinned, aggressive Hari and lily-white, pampered Pearl as they discover that they are not as dissimilar as they believed. Gee presents a well-realized future New Zealand, and even those unfamiliar with the landscape will be able to picture the cities, forests, and coasts. A map allows readers to follow the path of the three adventurers, and the spare language makes this first novel in a trilogy accessible to reluctant readers. The dominant themes of prejudice and governmental oppression are subtly presented and do not overpower the action-filled plot. Salt will delight lovers of dystopic fantasies and leave them anxious for the second installment.-Karen E. Brooks-Reese, Carnegie Library of Pittsburgh, PA (c) Copyright 2010. Library Journals LLC, a wholly owned subsidiary of Media Source, Inc. No redistribution permitted.

When Company soldiers press-gang the poor, they capture Hari's father and assign him to the salt mines of Deep Salt. Hari follows, determined to save him even though no one ever returns from Deep Salt. At the same time, Pearl, from a prestigious Company family, flees her arranged marriage along with her mystical Dweller maid, Tealeaf. Hari and Pearl can both communicate telepathically, and they end up traveling together. Aided by Tealeaf and other Dwellers, Pearl and Hari discover the secret mined in Deep Salt: an irradiated substance that kills everything it touches. After Company falls and war breaks out over who will rule, they realize the ultimate significance of this dangerous substance. In spare yet vivid prose, Gee creates a world of oppressive caste systems and endless violence in which our heroes work to save people from their own dark nature. This is a suspenseful, somber fantasy that combines exciting action with a subtle spiritual element. This first in the series ends with Pearl and Hari founding a peaceful settlement, and readers will anticipate the dangers ahead.--Hutley, Krista Copyright 2009 Booklist

Gee has mastered the art of creating a fantasy world without cumbersome description: character and dialogue, as much as situation, give this story its compelling momentum and considerable interest. In the tale's very first pages, Hari tries to use his superior dodging skills to rescue his father, Tarl, who has been commandeered by the ruling Company to slave in the fatal Deep Salt mine. The same day, Pearl, an upper-class Company girl fleeing an arranged marriage, escapes the city with her maid Tealeaf, a member of another race known as Dwellers. Though from three different peoples, Hari, Pearl, and the mysterious Tealeaf grow closer, discovering they share telepathic abilities and, as Tealeaf imparts her wisdom to the two teens, a vision for the future. The Dwellers help Hari retrieve Tarl; in turn Tarl reveals what no one has ever escaped Deep Salt to tell -- that the radioactive mineral mined there will destroy not just the miners but everyone if it is used in warfare. Gee's environmental themes are embedded in his plot but also in the very notions of identity and maturity his fantasy proposes; imagery and idea thus mesh admirably. At a more immediate level, Hari and Pearl are evolving, engaging heroes, and their many suspenseful adventures are conveyed in vivid, economical prose. From HORN BOOK, (c) Copyright 2010. The Horn Book, Inc., a wholly owned subsidiary of Media Source, Inc. No redistribution permitted.

In a fantasy world populated by evil colonizers, two children make a fresh start. Hari is a Burrows rat, a member of the brown-skinned underclass, who eat rats to survive. Radiant Pearl of the Deep Blue Sea is a pale-skinned daughter of the colonizing aristocracy on the run from an arranged marriage; if captured she'll be forced into slavery. Both children have the lost ability to speak without words, an ability that is recognized and encouraged by Pearl's nonhuman servant. Pearl joins Hari on his quest to rescue his father from Deep Salt, where troublemakers from the city are sent to toil and die. This dark world has a dim view of human nature: Victims are apt to become oppressors given half a chance. The most Pearl and Hari can hope for is saving themselves and preventing a few deaths. A fantasy without destined heroes redeeming the entire world from the forces of ultimate evil is refreshingthough this is book one in a trilogy, so there's still time. Admirable characters confronting human realities make for compelling reading. (Fantasy. 11-13) Copyright Kirkus Reviews, used with permission.
More book reviews at iDreamBooks.com