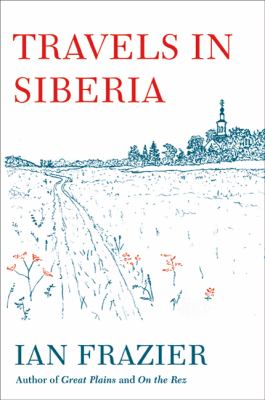 | Siberia (Russia) -- History, LocalDDC classification: 957 Summary: Travel writer Ian Frazier trains his eye for detail on Siberia, that vast expanse of Asiatic Russia. He explores many aspects of this storied, often grim region, which takes up one-seventh of the land on earth. He writes about the geography, the resources, the native peoples, the history, the forty-below midwinter afternoons, the bugs. The book brims with Mongols, half-crazed Orthodox archpriests, fur seekers, ambassadors of the czar bound for Peking, tea caravans, German scientists, American prospectors, intrepid English nurses, and prisoners and exiles of every kind. More than just a historical travelogue, this is also an account of Russia since the end of the Soviet Union, and a personal reflection on the all-around amazingness of Russia, a country that still somehow manages to be funny.
Tags from this library: No tags from this library for this title. Log in to add tags.
Fiction notes: Click to open in new window

A Dazzling Russian travelogue from the bestselling author of Great Plains

In his astonishing new work, Ian Frazier, one of our greatest and most entertaining storytellers, trains his perceptive, generous eye on Siberia, the storied expanse of Asiatic Russia whose grim renown is but one explanation among hundreds for the region's fascinating, enduring appeal. In Travels in Siberia , Frazier reveals Siberia's role in history--its science, economics, and politics--with great passion and enthusiasm, ensuring that we'll never think about it in the same way again.

With great empathy and epic sweep, Frazier tells the stories of Siberia's most famous exiles, from the well-known--Dostoyevsky, Lenin (twice), Stalin (numerous times)--to the lesser known (like Natalie Lopukhin, banished by the empress for copying her dresses) to those who experienced unimaginable suffering in Siberian camps under the Soviet regime, forever immortalized by Aleksandr Solzhenitsyn in The Gulag Archipelago .

Travels in Siberia is also a unique chronicle of Russia since the end of the Soviet Union, a personal account of adventures among Russian friends and acquaintances, and, above all, a unique, captivating, totally Frazierian take on what he calls the "amazingness" of Russia--a country that, for all its tragic history, somehow still manages to be funny. Travels in Siberia will undoubtedly take its place as one of the twenty-first century's indispensable contributions to the travel-writing genre.

Travel writer Ian Frazier trains his eye for detail on Siberia, that vast expanse of Asiatic Russia. He explores many aspects of this storied, often grim region, which takes up one-seventh of the land on earth. He writes about the geography, the resources, the native peoples, the history, the forty-below midwinter afternoons, the bugs. The book brims with Mongols, half-crazed Orthodox archpriests, fur seekers, ambassadors of the czar bound for Peking, tea caravans, German scientists, American prospectors, intrepid English nurses, and prisoners and exiles of every kind. More than just a historical travelogue, this is also an account of Russia since the end of the Soviet Union, and a personal reflection on the all-around amazingness of Russia, a country that still somehow manages to be funny.

Frazier, a frequent contributor to The New Yorker, himself narrates this fascinating travelog (originally excerpted in that magazine) that is chock-full of history, commentary, and his love for the grand, unrealized greatness of modern Russia. His observations derive from a cross-country trip he took one summer with two Russian guides and an only somewhat reliable van and are infused with historical context and everyday details. The audio's 16-hour length feels appropriate, given the time and space needed even to scratch the surface of the vastness of Asiatic Russia. A sprawling, enthusiastic glimpse of a land that is so much more than cold and ice. Recommended for fans of Frazier's national best seller Great Plains (1989) as well as for those interested in books on Russia, history, and travel. [The Farrar hc was "highly recommended" for "history buffs, armchair travelers, and lovers of a good essay," LJ 8/10.-Ed.]-J. Sara Paulk, Wythe-Grayson Regional Lib., Independence, VA (c) Copyright 2010. Library Journals LLC, a wholly owned subsidiary of Media Source, Inc. No redistribution permitted.

Drawn to what he calls "the incomplete grandiosity of Russia, Frazier's extraordinary work combines personal travelogue with in-depth history and gives readers a firsthand account of a place most will never see: Siberia. After 16 years of research, five trips to Siberia and more to western Russia, Frazier (Lamentations of the Father) recounts his obsession with the inhospitable place that doesn't officially exist: "no political or territorial entity has Siberia in its name." From the Mongol hordes that galloped across the steppes to the Soviet labor camps that killed millions, he intersperses the vast region's history with his own visits. Determined to immerse himself in Russian-and particularly Siberian-culture, Frazier embarks on a drive eastward across the tundra in the summer of 2001, accompanied by two guides. Seeing such sites as Irkutsk, the onetime "Paris of Siberia," Frazier and his companions travel 9,000 miles from the Baltic Sea to the Pacific in five weeks and two days, arriving on September 11. Since he hadn't felt Siberia's renowned bone-chilling cold, Frazier returned for a month in March of 2005, this time starting in the Pacific port of Vladivostok and traveling east to west. Part long-gestating love letter, part historical record of a place shrouded in mystery, this is Frazier at his best. (Oct.) (c) Copyright PWxyz, LLC. All rights reserved

Frazier (Great Plains, 1989; On the Rez, 2000) has long been fascinated by vast, empty spaces and the people who live in them. It's only natural that he is interested in the place that is almost synonymous with nowhere: Siberia. Here he tells of his repeated visits, from a summer trip across the Bering Strait to a winter trip to Novosibirsk; however, the centerpiece of the book is his overland crossing from the Baltic Sea to the Pacific Ocean. That's a massive journey, and this is a massive book. He captures the character and particulars of the place but lets us down, somewhat, as a tour guide. The very best travel writers possess physical and mental toughness, but Frazier is often surprisingly timid: he allows his Russian guides to drive past prisons he really wants to stop and see. And when, at the end of the book, he finally visits an abandoned, snow-covered prison camp, he doesn't explore the barracks building because it feels wrong: I was merely a foreign observer. His complaints about the discomforts of the journey occasionally leave us wondering whether he really loves Russia. Still and all, it's an unforgettable and enlightening portrait of a place most of us know very little about.--Graff, Keir Copyright 2010 Booklist

The peripatetic author of Great Plains (1989) and On the Rez (2000) returns with an energetic, illuminating account of his several trips to Siberia, where his ferocious curiosity roamed the vast, enigmatic area.Veteran New Yorker contributor Frazier (Lamentations of the Father: Essays, 2008, etc.) begins bluntly. "Officially," he writes, "there is no such place as Siberia." It is not a country, nor a province, yet the region bearing the name is extensive, comprising eight time zones. Throughout, the author confesses to a long love affair with Russia, a relationship that has waxed and waned over the decades but in some of its brightest phases sent him back repeatedly to see what few have seen. Here Frazier records several visits: a summer's trip via cantankerous automobile across the entire region, in the company of a couple of local companions; a winter's journey by train and car, during which the car sometimes used frozen waterways for roads; and a return visit to see the effects of the emerging Russian energy industry. He prepared in a fashion familiar to readers of his previous worksread everything he could, talked with anyone who knew anything, planned and schemed and made it happen. He also studied Russian extensively and tried gamely to engage local people he encountered along the way. On the road, he visited local museums and monuments and natural wonders, and he pauses frequently for welcome digressions on the historical background. He camped, fished and ate local delicacies (and indelicacies). Endearingly, he freely admits his inadequacies, fears (during one perilous icy trip he actually composed a farewell message to his family), blunders, dour moods, regrets and loneliness. The contrasts are starkone day, he walked through the ruins of a remote, frozen Soviet-era prison camp and later saw a ballet in St. Petersburgand the writing is consistently rich.A dense, challenging, dazzling work that will leave readers exhausted but yearning for more.]] Copyright Kirkus Reviews, used with permission.
More book reviews at iDreamBooks.com