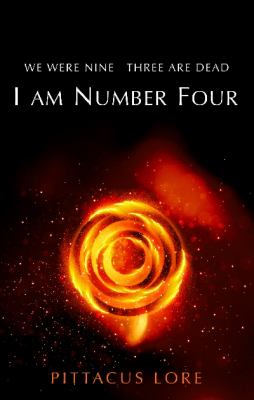 I am number four / by Pittacus Lore.

We were nine, three are dead, I am number four.

Nine teenagers and their guardians are hiding on Earth ...... protected by a charm that means they can only be killed in numeric order, three are already dead. John Smith is Number Four. And his mortal enemies are hunting him down.

The only way to keep off radar is to keep moving, never staying in one place for long. Finally in the firing line, all he can do is adopt the guise of a student and pray his unusual gifts - his legacies - stay hidden long enough for him to settle into this new community.

But others seem to sense his otherness and when small-town life sucks him into its intrigues, it's only a matter of time before his true nature is revealed. And that means there's no space for love, friendship or a future if it means protecting not only himself, but the other five ......

Reminiscent of Smallville and Heroes, here finally is a thriller with awesome pace, mindblowing special effects and a breathtaking high concept. It demands to be read in one sitting.

'Number Four is a hero for this generation.' Michael Bay , director of Transformers and producer of I Am Number Four, out 2011.

Visit the official I Am Number Four book website

In rural Ohio, friendships and a beautiful girl prove distracting to a fifteen-year-old who has hidden on Earth for ten years waiting to develop the Legacies, or powers, he will need to rejoin the other six surviving Garde members and fight the Mogadorians who destroyed their planet, Lorien.

In rural Ohio, friendships and a beautiful girl prove distracting to a fifteen-year-old who has hidden on Earth for ten years waiting to develop the Legacies, or powers, he will need to rejoin the other six surviving Garde members and fight the Mogadorians who destroyed their planet, Lorien.

In this action-packed but formulaic novel, first in the Lorien Legacies series, John Smith appears to be a normal American teenager, living in Ohio with his father, attending high school, and falling for a local girl. But he's really something much cooler: an alien from the planet Lorien, and one of the last survivors of a race that was nearly wiped out by its enemies. And now the evil Mogadorians have traveled to Earth looking for survivors, with an eye toward wiping out this planet as well. John is destined to fight them, but will his superpowers manifest before it's too late? Lore (a Loric elder in the book, and a pseudonym for writer James Frey and a coauthor) provides a fast-moving plot and some genuinely creepy bad guys, though the basic premise is cliched and the science won't pass muster with diehard SF fans. However, a Michael Bay-produced movie is planned for 2011, and for those looking for an undemanding, popcorn-ready read, this "guy-okay, alien-gets the girl and saves the world" adventure should do the trick. Ages 14-up. (Aug.) (c) Copyright PWxyz, LLC. All rights reserved

Gr 7 Up-Despite the amazing powers that many of the people of Lorien possess, the planet was defeated and its natural resources looted by Mogadorians in a matter of days. Only nine children escaped with their guardians to Earth, where they planned to hide until they developed their powers in order to defeat their enemies and revive Lorien. The Mogadorians hunt the Nine and have already killed three of them. And that's just the backstory. When Number Four, bearing the name "John Smith," moves to Paradise, OH, he runs afoul of the school bully, falls for the most beautiful girl in town, and befriends the local alien conspiracy nerd in short order. There is plenty of great action, but the dialogue is average, as is the character development. With its interesting premises and a fast-pace telling, the story will grab readers who are willing to suspend quite a bit of disbelief. Others, who like their science fiction with a bit more science and internal logic, will have to search elsewhere.-Eric Norton, McMillan Memorial Library, Wisconsin Rapids, WI (c) Copyright 2010. Library Journals LLC, a wholly owned subsidiary of Media Source, Inc. No redistribution permitted.

Is Pittacus Lore a pseudonym? An introduction suggests that Lore is 10,000 years old and hails from the planet Lorien, so I'm going with yes. This fun bit of business is indicative of the book's commitment to its premise: 10 years ago, nine children fled war-ravaged Lorien and landed on Earth along with their adult teachers. As they mature, each child develops powers called Legacies, which help them fight the evil Mogadarians. The Nine can only be killed in order and Number Three just bit it. That leaves Number Four: John Smith. At least, that's his latest alias, as he and his guardian, Henri, flee to a new town for the umpteenth time. There John encounters bullies, falls in love, and begins to, you know, move things with his mind. Though the finale bogs down in a cluttered monster battle, everything else is terrifically propulsive. Meanwhile, the backstory (Loriens are given credit for everything from Greek gods to the Loch Ness Monster) deserves the next story that Lore is surely concocting in his/her/its spacecraft right now.--Kraus, Daniel Copyright 2010 Booklist

This first book in a new series (putatively written by one of the Elders of the planet Lorien) revolves around human-looking aliens living on Earth. An intricately woven backstory is convincingly presented through the main character's visions. Ten years before the story begins, nine young Lorien children and their guardians escaped in an airship to Earth after their planet was invaded and decimated by Mogadorians. Thanks to a protective charm placed on the children before they left Lorien, they can only be killed in numerical order. As the book opens, the first three are dead, and Number Four and his guardian, Henri, flee to Paradise, Ohio, where Number Four assumes the identity of John Smith, a high school sophomore. Tired of hiding, he takes some chances and befriends two of the book's most memorable characters: a dog named Bernie Kosar and a boy named Sam. John also falls in love and starts to develop his Legacies, or special powers, that may one day help him and the other Loriens defeat the Mogadorians who have come to Earth to kill them and destroy Earth, too. This highly plot-driven science fiction novel moves at an intense pace while still focusing on character development. After a chaotic final battle that presents more questions than answers (a confusing sequence in an otherwise riveting first book), the open ending leaves ample room for future exploration of the series' intriguing larger concepts. cynthia k. ritter (c) Copyright 2010. The Horn Book, Inc., a wholly owned subsidiary of Media Source, Inc. No redistribution permitted.

If it were a Golden Age comic, this tale of ridiculous science, space dogs and humanoid aliens with flashlights in their hands might not be bad. Alas... Number Four is a fugitive from the planet Lorien, which is sloppily described as both "hundreds of lightyears away" and "billions of miles away." Along with eight other children and their caretakers, Number Four escaped from the Mogadorian invasion of Lorien ten years ago. Now the nine children are scattered on Earth, hiding. Luckily and fairly nonsensically, the planet's Elders cast a charm on them so they could only be killed in numerical order, but children one through three are dead, and Number Four is next. Too bad he's finally gained a friend and a girlfriend and doesn't want to run. At least his newly developing alien powers means there will be screen-ready combat and explosions. Perhaps most idiotic, "author" Pittacus Lore is a character in this fiction--but the first-person narrator is someone else entirely. Maybe this is a natural extension of lightly hidden actual author James Frey's drive to fictionalize his life, but literature it ain't. (Science fiction. 11-13)]] Copyright Kirkus Reviews, used with permission.
More book reviews at iDreamBooks.com