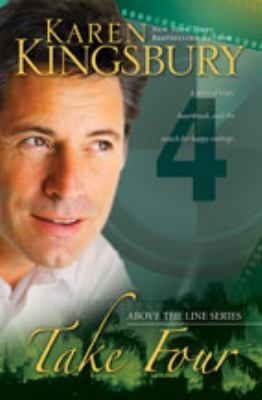 Genre/Form: Christian fiction. | Domestic fiction. | General fiction.DDC classification: 813/.54 Summary: Filmmakers Keith Ellison and Dayne Matthews finally ink a deal with the nation's top young actor. But the actor takes a public fall that threatens his reputation. Now the producers must act as missionaries to save the film, their families, and the young movie star.
List(s) this item appears in: Christian Fiction
Tags from this library: No tags from this library for this title. Log in to add tags.
Fiction notes: Click to open in new window

The Above the Line Series follows two dedicated Hollywood producers as they seek to transform the culture through the power of film.After Chase Ryan returns to his family and a job in his hometown, his best friend and fellow filmmaker Keith Ellison pairs up with former Hollywood heartthrob Dayne Matthews to finish following the dream(tm)making movies that might change the world.In Take Four, filmmakers Keith Ellison and Dayne Matthews have finally inked a deal to have the nation+s top young actor star in their current film. But at the same time, the actor takes a very public fall that threatens his reputation among his fan base. Meanwhile, healing happens for Andi Ellison in her relationship with God, her family, and those she loves, but is it too late? The new producers find they must truly act as missionaries in order to help save the film, their families, and the young movie star.Breakthroughs take place that the public will never know about, as the possibility of saving the world through film is finally a very real possibility.

Filmmakers Keith Ellison and Dayne Matthews finally ink a deal with the nation's top young actor. But the actor takes a public fall that threatens his reputation. Now the producers must act as missionaries to save the film, their families, and the young movie star.

Concluding Kingsbury's series featuring former missionaries-turned-film producers Chase Ryan and Keith Ellison (Take Three), this entry finds Chase returning to his hometown, while Keith hooks up with filmmaker Dayne Matthews. The two are ready to celebrate their success after signing one of Hollywood's top stars for their next project when their leading man is involved in a public scandal. Suddenly it is up to Keith and Dayne to save their own reputations and that of their star. VERDICT Kingsbury has been dubbed the "Queen of CF" by Time magazine for good reason. Her emotionally charged novels often contain a strong romantic component and feature Christians at odds with their everyday world. This title is no exception. Recommend this one to readers who enjoy well-drawn characters and contemporary settings. (c) Copyright 2010. Library Journals LLC, a wholly owned subsidiary of Media Source, Inc. No redistribution permitted.
More book reviews at iDreamBooks.com