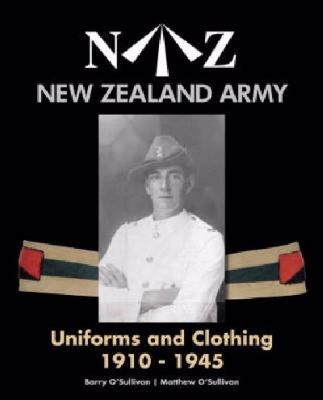 DDC classification: 355.140993
Contents:
Background -- Jackets -- Trousers, shorts and pantaloons -- Shirts -- Footwear -- Headwear -- Gaiters and puttees -- Overcoats and jerkins -- Underwear -- Knitwear -- Gloves -- Armlets -- Miscellaneous.
Tags from this library: No tags from this library for this title. Log in to add tags.

This is a companion volume to our first book 'New Zealand Army Personal Equipment, 1910 -1945. In this book we have covered the uniforms and clothing that were worn by New Zealand soldiers in New Zealand and overseas between 1910 and 1945. Also included are some civilian clothing and auxiliary uniforms that were worn when undertaking work in connection with the war effort. The items that have been photographed or described include the vast majority of uniforms and clothing types worn by New Zealanders, however there are still many more sundry items yet to be discovered and identified - this book endeavours to show as many of the basic garments as possible. Actual examples have been sourced from both public and private collections from Great Britain, Australia, New Caledonia and New Zealand. This book is aimed at genealogists, museum professionals, students of military history, militaria collectors, military re-enactors, military modellers, historical societies, auction houses, antique dealers, film studios and internet traders. It can be used to help identify uniforms and clothing in private collections and museums and to help clarify the period in which it was most likely worn.With this book and our previous publication it is hoped that New Zealand militaria can be properly identified and confidently displayed and exhibited in museum galleries around the world.