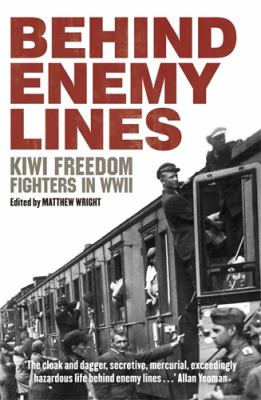 'The cloak and dagger, secretive, mercurial, exceedingly hazardous life behind enemy lines . . . ' (Allan Yeoman) Between 1941 and 1945 a fair number of young Kiwi combatants found themselves loose behind enemy lines in occupied southern Europe - mostly Greece, Yugoslavia and Italy. Most were escaped prisoners of war, trying to reach friendly territory. A few brave souls such as John Mulgan and Dudley Perkins took even riskier routes, actually landing in occupied territory to bolster the resistance and carry the fight to the enemy. When need arose, the escapees fought, often as members of partisan bands. 'We decided that if it was too late to get across to Turkey or Palestine the alternative was to kick up a bit of a bloody shindig in southern Greece,' Bill Griffiths recalled of his experiences. Resourceful and determined Kiwis helped make life a headache for German and Italian occupying forces. This book tells of many extraordinary feats of heroism and survival. We have only to look at Bill Griffiths' adventures, scudding into Piraeus harbour amidst a storm, right under the noses of the Nazis; or at the way Frank Gardner took the war into his own hands, dynamiting German trains with or without the help of the partisans, to realise just how remarkable, determined and capable these young New Zealanders really were.