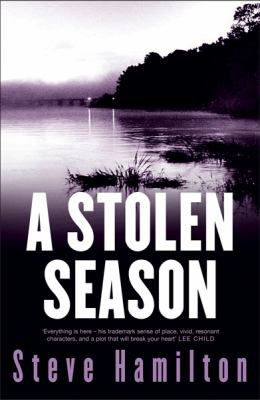 Genre/Form: Thrillers (Fiction) | Detective and mystery fiction.DDC classification: Rental Fiction Subject: On a cold, miserable night in Michigans Upper Peninsula, a night that wouldnt feel so unusual if it wasn't the Fourth of July, an antique wooden boat runs full-speed into a line of old railroad pilings in the shallow waters of Waishkey Bay. When Alex McKnight helps rescue the passengers, he finds three men. The driver is out cold, the other two are dazed but conscious. When they're all finally back on dry land and sent away in an ambulance, Alex figures hell never see them again. He couldn't be more wrong.
Tags from this library: No tags from this library for this title. Log in to add tags.
Fiction notes: Click to open in new window

It's the most miserable summer anyone can remember in Paradise, Michigan. Alex and his occasional partner Leon are outside the local casino waiting to see the 4th July firework celebrations when they witness a spectacular boat crash. They drag four men from the wreck and revive them. When Alex's friend Vinnie is later beaten up by four strangers, it doesn't take Alex long to figure out who they might be. Vinnie suspects that these strangers have been preying on some of the local tribes people, pressuring them to make fraudulent claims for medicine, which the men then sell on at street value to drug addicts.

When Alex and Vinnie begin to investigate, the men are forced into desperate action. One of them winds up dead, while the others are determined to prevent Alex and Vinnie from cutting off their drug supply. These dangerous newcomers receive a warm welcome from one quarter though - the criminal fraternity.

At least Alex can be certain that his cop girlfriend, Natalie, is safe in Toronto, working on a long-term undercover operation against a group of gun-runners. But Alex doesn't realise the true nature of the op and its link to the drug-traffickers; nor is he aware that Natalie is perilously close to having her cover blown. Then she comes face-to-face with three men who could be used to redefine the word 'vicious'...

On a cold, miserable night in Michigans Upper Peninsula, a night that wouldnt feel so unusual if it wasn't the Fourth of July, an antique wooden boat runs full-speed into a line of old railroad pilings in the shallow waters of Waishkey Bay. When Alex McKnight helps rescue the passengers, he finds three men. The driver is out cold, the other two are dazed but conscious. When they're all finally back on dry land and sent away in an ambulance, Alex figures hell never see them again. He couldn't be more wrong.

Trouble seems to find Alex McKnight, ex-Detroit cop who has retreated to Paradise in Michigan's Upper Peninsula to escape the psychic desolation resulting from his partner's death. In this seventh of the series, Alex and friends rescue three boaters who turn out to be big trouble-drugs, gun-running, and murder just for a start. With his Ontario cop girlfriend, Natalie, undercover in a sting operation, his Ojibway friend, Vinnie, beaten senseless, and Alex's conviction that a mysterious Canadian is behind it all, even a wintry summer in the North heats up. Hamilton is the only author to have won an Edgar and a Shamus for his first novel (A Cold Day in Paradise), but this whole series continues to develop. Despite depressing weather and spiritual isolation, we care about these characters as they grow in each book. The slam-bang action, wilderness locale, and climactic plot twists will have readers eagerly awaiting Alex's next adventure. For all mystery collections. Hamilton lives in up-state New York.-Roland Person, formerly with Southern Illinois Univ. Lib., Carbondale (c) Copyright 2010. Library Journals LLC, a wholly owned subsidiary of Media Source, Inc. No redistribution permitted.

The chill of Michigan's Upper Peninsula doesn't cool the action in Edgar-winner Hamilton's expertly paced seventh Alex McKnight novel (after 2005's Ice Run). On an unusually frigid Fourth of July night, the retired Detroit cop and his sometime partner, Leon Prudell, save three men from a boating accident in Lake Superior's Waishkey Bay. But the men return to accuse their rescuers of stealing a locked box off the boat, and Alex discovers that they're squeezing members of the Bay Mills Indian reservation for government-financed prescription painkillers. As Alex closes in on the dealers, he narrowly avoids death. Meanwhile, his long-distance girlfriend, Ontario police officer Natalie Reynaud, goes undercover in Toronto to ferret out an illegal arms dealer. When she pays Alex a surprise visit at his Paradise, Mich., cabin, their operations intersect with tragic results. Plot turnarounds and double-crosses ensure a startling conclusion. Author tour. (Sept.) (c) Copyright PWxyz, LLC. All rights reserved

Hamilton, who received the Edgar Award for his first mystery, A Cold Day in Paradise (1999), is now on his seventh installment in the series starring private eye Alex McKnight, who works as a cabin curator and sometimes private eye in Michigan's Upper Peninsula. McKnight has a familiar backstory for a private eye: he is a one-time cop with a troubled past (in McKnight's case, the trauma of having his partner killed). Hamilton, however, uses McKnight's break from his former life as a way of exploring his character's efforts to escape despair and find some semblance of meaning. He found at least some of that meaning in the last adventure, Ice Run (2004), in the form of a tentative love affair with a female cop. This time the action shuttles between McKnight's attempts to stop a prescription pain-killer drug ring in Paradise, Michigan, and his girlfriend's assignment to Toronto as an undercover gun dealer. Hamilton's gamble of putting the most exciting action offstage with the girlfriend pays off big-time here. Hair-raising suspense with poignant characterization. --Connie Fletcher Copyright 2006 Booklist

Michigan's Upper Peninsula has seen its share of iron winters--in 1995, it snowed six feet in a single day--but this one feels, as one depressed party puts it, like "something in the air is just plain broken." Maybe that's because lovely Natalie Reynaud is no longer around to provide warmth and comfort for ex-cop Alex McKnight. Having used up her sick leave, she's gone back to Canada to resume her own police work, leaving her lover bereft and bemused. Alex (Ice Run, 2004, etc.) doesn't quite know what to make of Natalie. Will she become a fixture in his life? Does she want to? Is she as uncertain about that as he is? Meanwhile, thank heaven, there are distractions. Three men in a Chris-Craft manage to slam it into an abandoned railroad bridge, totaling the boat and nearly themselves, if it weren't for Alex and friends. And yet it's a rescue evoking scant gratitude. These are hard guys working for bottom-feeders, connected to the kind of sleazy operation that has grief written all over it. Before it plays itself out, the price to Alex will be violence and bloodletting and bitter loss. The cast is strong and the local color vivid as ever, but this time, the plot has the phoned-in feel of characters in search of a story. Copyright ©Kirkus Reviews, used with permission.
More book reviews at iDreamBooks.com