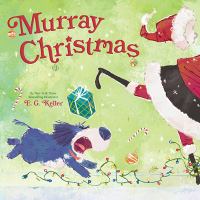 In this laugh-out-loud funny and charming holiday tale, lovable "patrol dog" Murray is put on high alert by all of the sudden changes around the holidays--from the tree in the living room to the laundry mistakenly hung by the fireplace, threats lurk everywhere! And worst of all? Some random guy in a red suit keeps showing up everywhere--and Murray is not impressed. Can he learn to embrace the festivities, or will Murray's misguided attempts to protect his family ruin Christmas?

Murray the "patrol dog" is alarmed by the holiday changes--from the tree indoors and the socks by the fireplace to the peculiar person who pops up in the living room in the middle of the night.

A shaggy dog with a big, boop-worthy snout and a pink pig stuffie, Murray is fiercely, if not always sensibly, vigilant on behalf of his beloved human family: an interracial bearded couple and their child, who's portrayed with light brown skin. One day, Murray's family does "the most peculiar thing: They planted a tree in the living room." Readers will instantly recognize further changes as Christmas preparations, but to Murray they mean one thing: "Threats lurked everywhere." He growls at "the smelly sticks" (candles) and tugs "at the laundry that was wrongly hung on the fireplace" (stockings). Late one snowy night, a suspicious-looking guy in a red suit--the same one who keeps appearing on television and in store windows--shows up at Murray's house. Can Murray save the day, or must Christmas be saved from Murray? With understated comic storytelling and elegant, watercolorlike digital drawings, Keller's holiday fable has the lighthearted wit of vintage New Yorker covers. Ages 4--8. (Sept.)

PreS-Gr 1--Keller reinvents the goodwill chaos of Christmas, with its decorations, traditions, and beliefs, through Murray, a canine who does not understand why his humans are changing his world with this joyous upheaval. Murray's sole job as "Patrol Dog" is to love his humans and home, and he is determined not to let anything stand in his way. When his family plants a tree in the house and hangs laundry (stockings) inside, Murray is on the prowl. Strange people singing on the doorstep and tiny cookie people are invading the house, so Murray does his best to stop these disturbances. However, it's the introduction of the jolly man in the red suit that is the final straw. Keller's digital art is vivid and detailed, with several spreads and wordless panels. Font choice and placement flows well, with splendid figurative language and opportunities to engage listeners with interactive questions. Although Murray's family, two male figures and a female child, is delightful, it is Murray who steals the show. VERDICT A first purchase. This is a perfect Christmas read-aloud; children will want to take this book--and Murray--home.--Rachel Zuffa

Scrappy little mutt Murray takes his ID-tag label of "Patrol Dog" seriously, barking at any and all perceived threats to his humans. Christmastime and its confusing home decorations bring additional challenges, but he's most confounded by Santa. Who is this person he sees on TV and in shop windows, and why do his humans love him? On Christmas Eve, Murray defends his domain from this red-suited intruder, but the chase through the house results in a big mess. "This wouldn't do at all!" Murray and Santa join forces to clean up, and the next morning Murray is rewarded with a gift of his own from Santa -- a new ID tag reading "Very Helpful Dog." Lively digital illustrations portray a vibrant, diverse city neighborhood and cast of characters (Murray's humans are a same-sex interracial couple and their daughter). A mix of full-page and panel art full of action, personality, and humor keeps the pace brisk. Martha V. Parravano November/December 2022 p.17(c) Copyright 2022. The Horn Book, Inc., a wholly owned subsidiary of Media Source, Inc. No redistribution permitted.

A dog living in a big city takes his job very seriously. Murray isn't going to let anything happen to his humans, saving them from random birds, blowing laundry, and anything else that might endanger them; after all, his collar states his job: "patrol dog." But he's mightily confused when his humans plant a tree in the house, and who is this bearded guy in a red suit he is seeing everywhere? And what's with all the new threats in the house? From "flashy snake[s]" (Christmas lights) to "smelly sticks" (candles), Murray has his paws full (as do his family members). When Christmas Eve arrives, readers will be able to guess what will happen. The showdown fortunately ends happily for both "intruder" and dog, who is gifted a new tag for his collar. Funny details in the digital illustrations will keep readers in stitches. Murray predictably "waters" the Christmas tree, and his pink pig stuffie is usually never far away. Murray's family includes one parent who has red hair and pale skin; the other presents as Black with short dark hair. Their adorable tyke has brown skin, often sports a dress and tights, and is missing a tooth. Murray is short with black-and-white fur and a big nose. (This book was reviewed digitally.) A delightful Christmas tale that shows a dog's perspective on the holiday and all its trappings. (Picture book. 3-8) Copyright (c) Kirkus Reviews, used with permission.