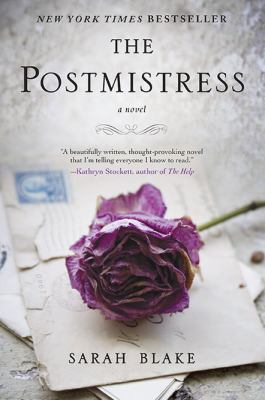 Those who carry the truth sometimes bear a terrible burden...

Filled with stunning parallels to today's world, The Postmistress is a sweeping novel about the loss of innocence of two extraordinary women-and of two countries torn apart by war.

On the eve of the United States's entrance into World War II in 1940, Iris James, the postmistress of Franklin, a small town on Cape Cod, does the unthinkable: She doesn't deliver a letter.

In London, American radio gal Frankie Bard is working with Edward R. Murrow, reporting on the Blitz. One night in a bomb shelter, she meets a doctor from Cape Cod with a letter in his pocket, a letter Frankie vows to deliver when she returns from Germany and France, where she is to record the stories of war refugees desperately trying to escape.

The residents of Franklin think the war can't touch them- but as Frankie's radio broadcasts air, some know that the war is indeed coming. And when Frankie arrives at their doorstep, the two stories collide in a way no one could have foreseen.

The Postmistress is an unforgettable tale of the secrets we must bear, or bury. It is about what happens to love during war­time, when those we cherish leave. And how every story-of love or war-is about looking left when we should have been looking right.

In London covering the Blitz with Edward R. Murrow, Frankie Bard meets a Cape Cod doctor in a shelter and promises that she'll deliver a letter for him when she finally returns to the United States. Filled with stunning parallels to today's world, "The Postmistress" is a sweeping novel about the loss of innocence of two extraordinary women--and of two countries torn apart by war.

Frankie Bard is a young female reporter in London during the Blitz, working with the likes of Edward R. Murrow and Eric Severeid. Her broadcasts make an impression on the residents of Franklin, MA-Dr. Will Fitch and wife Emma, garage owner Harry Vale, and postmaster Iris James-who in 1940-41 don't know how or if the war will affect them. Harry is sure the Germans are about to land on their beach, while, hearing Frankie talk of an orphaned boy, Emma and Will don't feel the news goes far enough. Iris insists that "there is an order and a reason" to everything, and "every letter sent.proves it." First novelist Blake doesn't let her work fall prey to easy sentimentality; this story is harsh and desperate, as indeed is war, but her writing is incisive and lush: a house missing a piece of mortar, "as if it had been bitten"; a distracted Iris, with "sand.dribbling out of the bag of her attention." VERDICT Even readers who don't think they like historical novels will love this one and talk it up to their friends. Highly recommended for all fans of beautifully wrought fiction. [See Prepub Alert, LJ 10/1/09.]-Bette-Lee Fox, Library Journal (c) Copyright 2010. Library Journals LLC, a wholly owned subsidiary of Media Source, Inc. No redistribution permitted.

Weaving together the stories of three very different women loosely tied to each other, debut novelist Blake takes readers back and forth between small town America and war-torn Europe in 1940. Single, 40-year-old postmistress Iris James and young newlywed Emma Trask are both new arrivals to Franklin, Mass., on Cape Cod. While Iris and Emma go about their daily lives, they follow American reporter Frankie Bard on the radio as she delivers powerful and personal accounts from the London Blitz and elsewhere in Europe. While Trask waits for the return of her husband-a volunteer doctor stationed in England-James comes across a letter with valuable information that she chooses to hide. Blake captures two different worlds-a naOve nation in denial and, across the ocean, a continent wracked with terror-with a deft sense of character and plot, and a perfect willingness to take on big, complex questions, such as the merits of truth and truth-telling in wartime. (Feb.) (c) Copyright PWxyz, LLC. All rights reserved

*Starred Review* To open Blake's novel of World War II and the convergence of three strong women is to enter a slipstream, so powerful are its velocity, characters, and drama. How can you resist Frankie Bard, an American journalist of gumption and vision who is bravely reporting on the Blitz from London? Her distinctive voice and audacious candor are heard on radios everywhere on the home front, including Cape Cod, where Iris James, in love for the first time at 40, keeps things shipshape at a small-town post office. The third in Blake's triumvirate of impressive women, Emma, the waiflike wife of the town's doctor, is not as obvious a candidate for heroism until a tragedy induces her husband to join the war effort. As Frankie risks her life to record the stories of imperiled Jews, Iris and Emma struggle to maintain order as America goes reluctantly to war. Blake raises unsettling questions about the randomness of violence and death, and the simultaneity of experience--how can people frolic on a beach while others are being murdered? Matching harrowing action with reflection, romance with pathos, Blake's emotional saga of conscience and genocide is poised to become a best-seller of the highest echelon.--Seaman, Donna Copyright 2010 Booklist

Three women on the eve of America's involvement in World War II consider the volatile nature of truth in the face of tragedy. Iris James is postmistress for the town of Franklin on the tip of Cape Cod. Everyone's secrets pass through her hands, but Iris, a 40-year-old virgin, reveres the ethical standards her position confers, order imposed on the chaos. New to Franklin in September 1940 is Emma, young Dr. Will Fitch's bride, an orphan who hopes that marriage and the close community will bring her the family she's missed. While residents enjoy the quiet of fall on the Capeeveryone but Harry Vale, who perches on the upper floor of Town Hall looking out to sea for U-boatsthey listen to the radio broadcasts of Frankie Bard, a pioneering female American journalist covering the Blitz in London. Her report about an orphaned boy prompts Will, reeling from the recent death of a patient during childbirth, to go to London and help the wounded in penance. Frankie briefly meets Will in a bomb shelter, where he makes a disturbing confession: He can't return to his life on the Cape; the war and his usefulness during it have made him happy. Upper-crust Frankie is also exhilarated by the war, but as she and Will exit the shelter the next morning, she sees him hit and killed by a taxi. Frankie's boss, Ed Murrow, sends her to the continent to interview Jewish refugees fleeing Germany; she also witnesses executions and realizes the enormity of the task ahead. Back on the Cape, Emma, heavily pregnant, doesn't know what to make of Will's disappearance. But Iris does; she confiscated the letter informing Emma of Will's death. Then Frankie shows up, surprised that everyone thinks Will is still alive. The loose ends that plague every tale and the fractional nature of knowing are the central themes of this narrative, which plays with the idea of storytelling. Quietly effective work from first novelist Blake. Copyright Kirkus Reviews, used with permission.
More book reviews at iDreamBooks.com