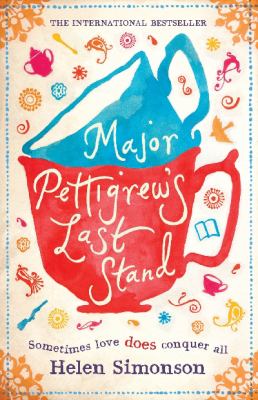 | Pakistanis -- England -- Fiction | Interracial friendship -- FictionGenre/Form: Romance fiction.DDC classification: 813.6 Summary: Major Ernest Pettigrew (retired) leads a quiet life in the village of St. Mary, England, until his brother's death sparks an unexpected friendship with Mrs. Jasmina Ali, the Pakistani shopkeeper from the village. Drawn together by their shared love of literature and the loss of their respective spouses, the Major and Mrs. Ali soon find their friendship blossoming into something more. But will their relationship survive in a society that considers Ali a foreigner?
Tags from this library: No tags from this library for this title. Log in to add tags.
Fiction notes: Click to open in new window

Honour, duty and a properly brewed cup of tea. The sweet, moving and uplifting story of a highly unlikely relationship between a very proper English gentleman and a widowed Pakistani shopkeeper.

Major Ernest Pettigrew (retired) leads a quiet life in the village of St. Mary, England, until his brother's death sparks an unexpected friendship with Mrs. Jasmina Ali, the Pakistani shopkeeper from the village. Drawn together by their shared love of literature and the loss of their respective spouses, the Major and Mrs. Ali soon find their friendship blossoming into something more. But will their relationship survive in a society that considers Ali a foreigner?

Sixty-eight-year-old Maj. Ernest Pettigrew has settled into a genteel life of quiet retirement in his beloved village of Edgecombe St. Mary. Refined, gentlemanly, unwaveringly proper in his sense of right vs. wrong, and bemused by most things modern, he has little interest in cavalier relationship mores, the Internet, and crass developments and is gently smitten by the widowed Mrs. Ali, the lovely Pakistani owner of the local shop where he buys his tea. After the unsettling death of his brother, Bertie, the Major finds his careful efforts to court Mrs. Ali (who shares his love of literature) constantly nudged off-course by his callow son, Roger; a handful of socialite ladies planning a dinner/dance at the Major's club; and the not-so-subtle racist attitudes his interest in Mrs. Ali engender. Verdict This irresistibly delightful, thoughtful, and utterly charming and surprising novel reads like the work of a seasoned pro. In fact, it is Simonson's debut. One cannot wait to see what she does next. [See Prepub Alert, LJ 11/15/09.]-Beth E. Andersen, Ann Arbor Dist. Lib., MI (c) Copyright 2010. Library Journals LLC, a wholly owned subsidiary of Media Source, Inc. No redistribution permitted.

In her charming debut novel, Simonson tells the tale of Maj. Ernest Pettigrew, an honor-bound Englishman and widower, and the very embodiment of duty and pride. As the novel opens, the major is mourning the loss of his younger brother, Bertie, and attempting to get his hands on Bertie's antique Churchill shotgun-part of a set that the boys' father split between them, but which Bertie's widow doesn't want to hand over. While the major is eager to reunite the pair for tradition's sake, his son, Roger, has plans to sell the heirloom set to a collector for a tidy sum. As he frets over the guns, the major's friendship with Jasmina Ali-the Pakistani widow of the local food shop owner-takes a turn unexpected by the major (but not by readers). The author's dense, descriptive prose wraps around the reader like a comforting cloak, eventually taking on true page-turner urgency as Simonson nudges the major and Jasmina further along and dangles possibilities about the fate of the major's beloved firearms. This is a vastly enjoyable traipse through the English countryside and the long-held traditions of the British aristocracy. (Mar.) (c) Copyright PWxyz, LLC. All rights reserved

Change is threatening the little world of Edgecombe St. Mary. Lord Dagenham is about to sell off part of his ancestral estate to developers, and Pakistanis have taken over the village shop. Major Ernest Pettigrew is definitely old school, but he has been lonely since his wife died, and though he is is prey to various unattached ladies it is with shopkeeper Mrs. Ali that he forms a bond, nourished by their mutual interest in literature. Meanwhile, his ambitious son Roger comes to town with a sleek American girlfriend and starts renovating a nearby cottage. And the village ladies are busy hatching plans for the annual Golf Club dance, for which this year's theme is An Evening at the Mughal Court. There is a great deal going on in these pages sharply observed domestic comedy, late-life romance, culture clash, a dash of P. G. Wodehouse, and a pinch of religious fundamentalism. First novelist Simonson handles it all with great aplomb, and her Major, with his keen sense of both honor and absurdity, is the perfect lens through which to view contemporary England.--Quinn, Mary Ellen Copyright 2010 Booklist

Set-in-his-ways retired British officer tentatively courts charming local widow of Pakistani descent. Shortly after being informed that his younger brother Bertie has suddenly passed away from a coronary, Maj. Ernest Pettigrew answers his door to find Mrs. Ali, proprietress of his village food shop. She's on an errand, but when she steps in to help the somewhat older man during a vulnerable moment, something registers; then they bond over a shared love of Kipling and the loss of their beloved spouses. Their friendship grows slowly, with the two well aware of their very different lives. Though born in England, Mrs. Ali is a member of the Pakistani immigrant community and is being pressured by her surly, religious nephew Abdul Wahid to sign over her business to him. The major belongs to a non-integrated golf club in their village and is girding himself for a messy battle with his sister-in-law Marjorie over a valuable hunting rifle that should rightfully have gone to him after Bertie's death. He also must contend with his grown son Roger, a callow, materialistic Londoner who appears in the village with a leggy American girlfriend and plans to purchase a weekend cottage for reasons that seem more complex than mere family unity. Add to that a single mum with a small boy who bears a striking resemblance to Abdul Wahid, and you have enough distractions to keep the mature sweethearts from taking it to the next level. But the major rallies and asks Mrs. Ali to accompany him to the annual club dance, which happens to have an ill-advised "Indian" theme. The event begins magically but ends disastrously, with the besotted major fearing he has lost his love forever. His only chance at winning her back is to commit to a bold sacrifice without any guarantees it will actually work. Unexpectedly entertaining, with a stiff-upper-lip hero who transcends stereotype, this good-hearted debut doesn't shy away from modern cultural and religious issues, even though they ultimately prove immaterial. Copyright Kirkus Reviews, used with permission.
More book reviews at iDreamBooks.com