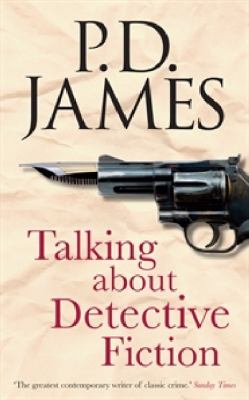 <p>From the birth of crime writing with Wilkie Collins and Dostoevsky, through Conan Doyle to the golden age of crime, with the rise of Agatha Christie, Ngaio Marsh and Margery Allingham, P. D. James brings a lifetime of reading and writing crime fiction to bear on this personal history of the genre. There are chapters on great American crime writers - the likes of Patricia Highsmith, Raymond Chandler and Dashiel Hammett. James also discusses many of her favourite famous detectives, from Sherlock Holmes to Philip Marlowe.</p> <p>P.D. James, the bestselling author of Death Comes to Pemberley, Children of Men and The Murder Room, presents a brief history of detective fiction and explores the literary techniques behind history's best crime writing.</p>

James, who turns 90 in August, wrote this Edgar Award-winning book on the history, development, and craft of detective fiction as a charitable contribution to the University of Oxford's Bodleian Library. Exploring the genre in great detail, she begins with Wilkie Collins's seminal 1868 novel, The Moonstone, also discussing the Golden Age of British detective fiction that gave us the works of Agatha Christie and Dorothy L. Sayers, among others. James additionally addresses her own contributions to the genre; namely, her Adam Dalgliesh series. Throughout, her prose is as clear and precise as her readers and listeners have come to expect. Actress/writer Diana Bishop does an extraordinary job of narrating this material; her British accent is crisp and lucid, and her pacing is perfect for optimal understanding by American audiences. Highly recommended for James's fans as well as anyone interested in fiction writing and literary history. The Knopf hc was described as being "entertaining [and] approachable.an appealing read for a wide audience," LJ 1/10.-Ed.]-Barbara Valle, El Paso P.L., TX Copyright 2010 Reed Business Information.

One of the most widely read and respected writers of detective fiction, James (The Private Patient) explores the genre's origins (focusing primarily on Britain) and its lasting appeal. James cites Wilkie Collins's The Moonstone, published in 1868, as the first detective novel and its hero, Sergeant Cuff, as one of the first literary examples of the professional detective (modeled after a real-life Scotland Yard inspector). As for Conan Doyle's Sherlock Holmes stories, James argues that their staying power has as much to do with the gloomy London atmosphere, "the enveloping miasma of mystery and terror," as with the iconic sleuth. Devoting much of her time to writers in the Golden Age of British detective fiction (essentially between the two world wars), James dissects the work of four heavyweights: Agatha Christie, Dorothy L. Sayers, Margery Allingham and Ngaio Marsh. Though she's more appreciative of Marsh and Allingham (declaring them "novelists, not merely fabricators of ingenious puzzles"), James acknowledges not only the undeniable boost these women gave to the genre but their continuing appeal. For crime fiction fans, this master class from one of the leading practitioners of the art will be a real treat. 9 illus. (Dec.) (c) Copyright PWxyz, LLC. All rights reserved

In 2006, the Bodleian Library at Oxford University asked celebrated novelist P. D. James to write about British detective fiction. Had they requested this of James 20 or even 30 years ago, the result would have been much the same. James pontificates on detective fiction, primarily British but with an occasional nod to American writers, as if she has just emerged from the 1950s or1960s. Except for a reference to Sara Paretsky, which sticks out like a body in the library, this overview is decidedly old school. What makes her fairly conventional history worthwhile, however, is the personality of James herself. She talks about her own methods for coming up with ideas and for plotting. She talks about how Agatha Christie broke some of the most cherished rules of crime fiction. And the book is filled with quirky asides for example, James holds that the formation of a British police force in 1842 made detective fiction possible. It's like sitting across from James over tea, and that, naturally, is a delight.--Fletcher, Connie Copyright 2010 Booklist
More book reviews at iDreamBooks.com