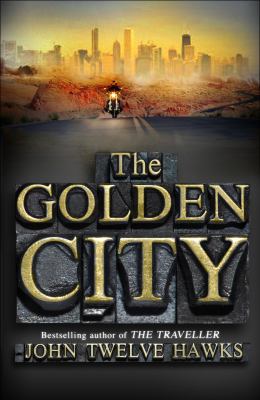 Genre/Form: Thrillers (Fiction)DDC classification: 813.6 Subject: A world that exists in the shadow of our own ...John Twelve Hawks' previous novels about the mystical Travellers and the Brethren, their ruthless enemies, generated an extraordinary following around the world. In "The Golden City", Twelve Hawks delivers the climax to his spellbinding epic. Struggling to protect the legacy of his Traveller father, Gabriel faces troubling new questions and relentless threats. His brother Michael, now firmly allied with the enemy, pursues his ambition to wrest power from Nathan Boone, the calculating leader of the Brethren. And Maya, the Harlequin warrior pledged to protect Gabriel at all costs, is forced to make a choice that will change her life forever.
Tags from this library: No tags from this library for this title. Log in to add tags.
Fiction notes: Click to open in new window

Since childhood Gabriel and Michael Corrigan were told by their father Matthew that the world they live in is engaged in a constant struggle between good and evil. Matthew has since disappeared and both his sons find themselves on different sides in a fight for the future of humanity.

A world that exists in the shadow of our own ...John Twelve Hawks' previous novels about the mystical Travellers and the Brethren, their ruthless enemies, generated an extraordinary following around the world. In "The Golden City", Twelve Hawks delivers the climax to his spellbinding epic. Struggling to protect the legacy of his Traveller father, Gabriel faces troubling new questions and relentless threats. His brother Michael, now firmly allied with the enemy, pursues his ambition to wrest power from Nathan Boone, the calculating leader of the Brethren. And Maya, the Harlequin warrior pledged to protect Gabriel at all costs, is forced to make a choice that will change her life forever.

Sequel to: The dark river.

The battle between brothers Michael and Gabriel Corrigan comes to a head in this final "Fourth Realm" trilogy installment (after The Traveler and The Dark River). The brothers are the last of the Travelers, a line of prophets with the ability to travel to parallel universes. Michael continues to cooperate with the Tabula, a group of wealthy international elite in pursuit of world domination. He travels to the fifth realm, where ultimate control of the population is instilled through fear. Upon his return, Michael begins to take control of the Tabula to start his own worldwide campaign of fear. Gabriel has been gathering his own forces, known as Free Runners, individuals who have noticed the growth in invasive technologies that curtail true freedom. With their lives constantly in danger from the Tabula, Gabriel, his friend Hollis, and Harlequin bodyguards Maya and Linden must find a way to thwart Michael's plans. VERDICT Twelve Hawks is able skillfully to expand further on his characters and keep the rapid pace for a satisfying conclusion to this technological fantasy-thriller amalgamation. [See Prepub Alert, LJ 6/1/09.]-Joy Gunn, Henderson Libs., NV (c) Copyright 2010. Library Journals LLC, a wholly owned subsidiary of Media Source, Inc. No redistribution permitted.

The final volume in Hawks's fantasy thriller series, the Fourth Realm trilogy, brings to an end the struggle between the forces of evil, the Brethren-run empire known as the Tabula, and those of good-the Travelers, Harlequins and other fighters of the Resistance. The first book, The Traveler, promised, and delivered, much; the second, The Dark River, was bleak and a bit of a disappointment. With the third, Hawks has returned, somewhat, to the excitement of the first, though those expecting a final, titanic battle to decide the fate of the world will come away frustrated. In the end, the action scenes are too few and too brief, and the explorations into the other Realms don't come to much of anything. Some fans might wish the author had spent less time on the easy-to-understand philosophical underpinnings (e.g., "freedom is the essence of our lives-not surveillance and control") and more time on swinging swords. Newcomers should read the series in order. (Sept.) (c) Copyright PWxyz, LLC. All rights reserved

Twelve Hawks' Fourth Realm trilogy, which began with The Traveler (2005) and continued with The Dark River (2007), concludes. The author has several threads to tie up: the fate of Maya, the Harlequin presently trapped in an alternate realm; the struggle of Gabriel, Maya's lover, to find her and to ensure that his evil brother, Michael, doesn't take over the world; the struggle of Michael to manipulate certain technologies for his own evil purposes. Twelve Hawks, who has kept his own identity a secret, is a highly imaginative writer, and he likes to get right to the meat of the story, which is good, if you like to play catch-up as you're reading. If you're the type who likes things clearly explained at the outset (What's a Harlequin? What's a Traveler?), you might feel a bit confused. The first two novels in this trilogy were stunningly imaginative and innovative; this one is, too, but the burden of the first two books weighs heavily on both author and reader. Twelve Hawks must bow here to the more mundane needs of plot resolution, and readers not thoroughly familiar with the earlier books may lose themselves trying to keep things straight. For devotees, however, this is a satisfying and very entertaining wrap-up, though it lacks the bravura flourishes of its predecessors.--Pitt, David Copyright 2009 Booklist

Less-than-rip-roaring final installment in Twelve Hawks' Fourth Realm trilogy (The Traveler, 2005, etc.). Brothers Gabriel and Michael are Travelers, mystics who have the ability to journey between parallel dimensions, or realms. They find themselves aligned with opposite sides in the conflict between the Brethren, a shadowy group bent on acquiring and maintaining power, and those who work to thwart the Brethren's nefarious plan to establish a global surveillance network known as the Panopticon, designed to squash any and all efforts at resistance. Michael, the brother who works for the bad guys, is given a lesson in Machiavellian tactics by the Half Gods, a group of technologically advanced beings who have established Orwellian control over the Fifth Realm, and he returns to our dimension to consolidate his power. Meanwhile, gentle Gabriel travels to the hellish First Realm to rescue his beloved Maya, a member of the Harlequin warrior sect, dour fighters dedicated to protecting Travelers from the Brethren. After cementing his position as a leader of the Brethren and the Evergreen Foundation (their public face), Michael sets a plan in motion to increase his organization's power by generating terror in the populace. He hires a psychopath to kidnap children, thus increasing calls for greater surveillance, while Gabriel engineers a bold play to inform the world at large about the shady deeds perpetrated by the Evergreen Foundation. Despite the fact that this trilogy revolves around a high-stakes and often violent struggle between the forces of good and evil, it is oddly boring. Only a few well-wrought action sequences may hold the reader's strained interest; the decidedly half baked inter-dimensional travel cosmology and bland New Age-y philosophizing will not. Tepid and vague. Copyright Kirkus Reviews, used with permission.
More book reviews at iDreamBooks.com