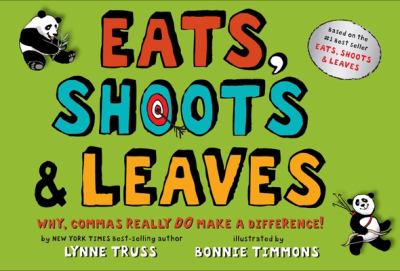 Punctuation play at its finest!

Illuminating the comical confusion the lowly comma can cause, this new edition of Eats, Shoots & Leaves uses lively, subversive illustrations to show how misplacing or leaving out a comma can change the meaning of a sentence completely.

This picture book is sure to elicit gales of laughter--and better punctuation--from all who read it.

Based on the adult version of the same title.

Illustrates the importance of commas and punctuation in the structure of sentences, showing how altering the position of a comma can effect the meaning of a sentence. Suggested level: junior, primary.

In this pithy adaptation of her bestselling adult book of the same title, Truss wryly demonstrates the truth of her subtitle-sans comma. As she explains in her brief introduction, commas "can create havoc when they are left out or are put in the wrong spot, and the results of misuse can be hilarious." With the help of Timmons's energetic, often comically exaggerated cartoons, Truss shows just how hilarious. The opening scene sets the humorous yet instructive tone: a panda walks into a library, eats a sandwich, then draws his bow and shoots two arrows. When the librarian asks why he has done that, the animal points to a book's definition of panda, which reads, in part, "Eats, shoots and leaves," apparently describing the species' diet rather than behavior. Several of the examples of comma commotion are common, such as the difference between the meanings of "Slow, children crossing" and "Slow children crossing"; or "Eat here, and get gas" and "Eat here and get gas" (the latter picturing a woman airborne due to bodily gas). Yet most of the scenarios presented take an original approach, among them side-by-side depictions of a classroom in which first a child ("The student, said the teacher, is crazy") and then his teacher ("The student said the teacher is crazy") indulge in inane antics. A final spread explains the grammatical reason for the varying meanings of each pair of sentences. Why, this will encourage kids to think twice about using, or not, a comma. Ages 4-8. (July) (c) Copyright PWxyz, LLC. All rights reserved

Gr 1-3-Truss's picture-book version of her adult bestseller tackles the topic of commas and what can go wrong when they are misused. The title is derived from an old joke in which a panda misunderstands correct panda behavior after reading a poorly punctuated wildlife guide. Versions of two identically worded sentences are presented side by side, demonstrating the difference in meaning achieved when a comma is added or subtracted. Timmons's humorous watercolor cartoons bring the point home. In one spread, the sentence on the left ("Look at that huge hot dog!") is illustrated with a gigantic sausage, while that on the right ("Look at that huge, hot dog!") shows a tall, sweltering canine. The author cleverly selects examples with the potential for comical (and grammatically correct) revisions. Endnotes elaborate on comma usage in more technical terms. While a title on grammar may need hand selling, both read-aloud audiences and independent readers will discover the potent possibilities of punctuation. More specific than Robin Pulver's Punctuation Takes a Vacation (Holiday House, 2003), Truss's work is sure to spark creative assignments in elementary composition curriculums.-Jayne Damron, Farmington Community Library, MI (c) Copyright 2010. Library Journals LLC, a wholly owned subsidiary of Media Source, Inc. No redistribution permitted.

Among popular nonfiction titles for adults adapted for younger audiences, this picture book based on Truss' 2004 best-seller about punctuation may be a surprise, considering most kids' indifference to the topic. Yet it proves very effective, thanks to entertaining repackaging that narrows the original's broad purview to the comma, and focuses on cartoonist Timmons' interpretations of humorous comma-related goofs akin to the one referenced by the title (the punchline of an old joke about a panda, here set in a library rather than a bar). While dissolving into giggles over the change in meaning between Eat here, and get gas, or Eat here and get gas (likely to be the most popular of the 14 sentence pairs given), children will find themselves gaining an instinctive understanding of the traffic signals of language, even without the concluding spread explaining the whys and wherefores. This is a no-brainer for language arts class, but also recommend it to fans of Jon Agee's books of palindromes, William Steig's delightful alphabet rebuses, or introductory grammar books by Brian Cleary . --Jennifer Mattson Copyright 2006 Booklist

(Primary) Truss's adult bestseller, a fizzily ornery celebration of punctuation, is here reduced to the section on comma usage, with entertaining if mixed results. Accompanied by cartoons that illustrate the niceties of the well- or ill-placed comma, identical strings of words, punctuated differently, face each other across the gutter. Hence, ""The kids, who got ice cream, were very happy"" glosses a picture of a parlorful of children contentedly licking, whereas ""The kids who got ice cream were very happy"" appears beneath a picture of three children licking smugly while their unlucky counterparts look on in envy. Timmons's illustrations do their job in yeoman fashion, ably leading children to the correct interpretations of the various statements. While kids may enjoy the introduction (which relocates the confused panda referenced in the title to a library and arms him with a bow and arrows), they are less likely to put up with the concluding appendix explaining ""Why These Commas Really Do Make a Difference!"" This latter re-presents the paired sentences with dry grammatical explanations replete with terms like ""independent clause"" and ""coordinating adjectives."" One oddity of this kids' version is that it employs the serial comma, which Truss's adult opus clearly decries. The whole is undeniably funny, however, and bids fair to produce a new generation of sticklers, and who can complain about that? (c) Copyright 2010. The Horn Book, Inc., a wholly owned subsidiary of Media Source, Inc. No redistribution permitted. All rights reserved.

The title of this clever, creative commentary on commas is the same as the author's bestselling grammatical guide for adults, but the concept here is quite different. The first two pages introduce the titular panda who eats (a sandwich), shoots (two arrows from his bow) and then leaves the scene, followed by an author's note on the importance of the comma in written communication. In the following pages, each spread offers a pair of sentences differing by just one or two commas. For example, on one page, a school crossing guard and students illustrate "Slow, children crossing." The facing page shows dawdling children on a bridge with the text, "Slow children crossing." The witty sentences increase in complexity (and hilarity), augmented by sophisticated watercolor-and-ink illustrations with New Yorker flair. A final spread reprises the entire text with miniature illustrations and specific grammatical explanations. Elementary-school teachers will love this lighthearted but instructive effort, as will their students, who will never look at a comma again in quite the same way. (Nonfiction. 5-10) Copyright ©Kirkus Reviews, used with permission.
More book reviews at iDreamBooks.com