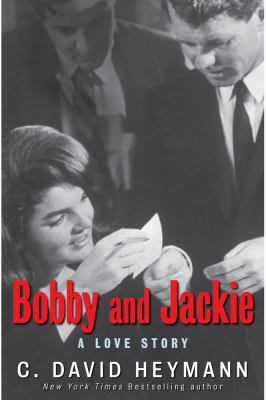 DDC classification: 973.922092 Summary: An in-depth look at the much talked-about -- but never fully revealed -- relationship between Jackie Kennedy and Robert F. Kennedy that began as a result of their shared grief over the assassination of the president in 1963 and lasted until Bobby began his run for the Democratic presidential nomination in 1968.
Tags from this library: No tags from this library for this title. Log in to add tags.
Fiction notes: Click to open in new window

From the "New York Times"-bestselling author of "A Woman Named Jackie" comes this in-depth and well-researched look at the complex relationship that existed between Bobby Kennedy and Jacqueline Kennedy Onassis. 50 bw photos throughout.

An in-depth look at the much talked-about -- but never fully revealed -- relationship between Jackie Kennedy and Robert F. Kennedy that began as a result of their shared grief over the assassination of the president in 1963 and lasted until Bobby began his run for the Democratic presidential nomination in 1968.

The adulterous action in Heymann's scandal-driven biography moves along at a brisk pace, and Dick Hill serves as an engaging reader but he misses the opportunity to take on the personas of a colorful cast of `60s political and pop culture icons, including Aristotle Onassis, Truman Capote, and Andy Williams. While Hill does convey an ample portion of the raw emotion behind Jacqueline Kennedy Onassis' experiences with betrayal, grief, and the celebrity fishbowl in which she found herself, other players in the drama seem relegated to serve as relatively nondescript pawns inside a litany of Camelot misdeeds. An Atria hardcover (Reviews, Jun. 8). (Sept.) Copyright 2009 Reed Business Information.

Heymann has developed something of a cottage industry writing about Kennedys, what with previous books about Jackie, Bobby, Caroline, and John. Here he repackages some of that material and substantially augments it, arguing what many have long suspected: that after the death of JFK, Jackie and Bobby embarked upon an affair. For someone who has written so extensively about his subjects, he doesn't seem to like the Kennedys much. Both Jackie and Bobby come across as selfish and cold. Likewise, despite the suggestive subtitle, the narrative has a rather mechanical feeling: where the couple trysted, who saw them, and even, in some cases, what they did. The evidence remains essentially circumstantial, but Heymann's sources are impeccable. He interviewed those in the know, including Pierre Salinger, George Plimpton, and Peter Lawford. Most interesting is the rivalry between RFK and Aristotle Onassis, who despised each other. For those who wonder why Heymann would bring this up 40 years after the fact, he responds in the foreword: As a biographer, it has always been my conviction that sexual (or personal) behavior is integral to a fuller understanding of a person's life. Many readers will no doubt agree.--Cooper, Ilene Copyright 2009 Booklist
More book reviews at iDreamBooks.com