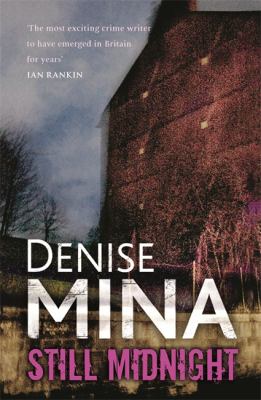 Genre/Form: Detective and mystery fiction. | Mystery -- Fiction.DDC classification: 823.92
Contents:
Nadat een oude man is ontvoerd vragen de daders zoveel losgeld dat de familie dat niet kan betalen.
Subject: It's the case that could make DS Alex Morrow's career ; it would make any cop salivate. A home invaded in the dead of night, deep in the cosy suburbs ; a hard working family at the heart of it, and a vulnerable old man taken hostage. It's high-profile, a black-and-white case that shouldn't be hard to solve. And yet.
Tags from this library: No tags from this library for this title. Log in to add tags.
Fiction notes: Click to open in new window

A brutal and mysterious kidnap of an innocent old man begins this huge new break-out novel from one of crime writing's rising stars...

It's the case that could make DS Alex Morrow's career ; it would make any cop salivate. A home invaded in the dead of night, deep in the cosy suburbs ; a hard working family at the heart of it, and a vulnerable old man taken hostage. It's high-profile, a black-and-white case that shouldn't be hard to solve. And yet.

This is John Creasey Dagger Award winner Mina's (www.denisemina.co.uk) eighth crime novel, following Slip of the Knife (2008), also available from BBC Audiobooks America and read by Glasgow-born actress/musician Jane MacFarlane. In it, an elderly shop owner is kidnapped during what appears to be a botched home invasion. Alex Morrow should have been lead on the case, but a supporting role lands her in the middle of a political morass at least as complicated as the crime. Mina's gritty, precise prose contains some enviably poetic imagery. The working-class characters of Glasgow are enlivened by MacFarlane's versatile accents and husky tones. Though not Mina's strongest novel, this police procedural is still a worthy addition to the current crop of international mysteries. Frequent vulgar language may offend some. [The Reagan Arthur: Little, Brown hc was recommended for "fans of Ian Rankin and anyone who enjoys a good police procedural," LJ 3/1/10.-Ed.]-Janet Martin, Southern Pines P.L., NC (c) Copyright 2010. Library Journals LLC, a wholly owned subsidiary of Media Source, Inc. No redistribution permitted.

At the outset of Mina's stellar first in a new series, two men in army fatigues, Pat and Eddy, break into the suburban Glasgow house of the Anwars, a Muslim family, demanding to speak to a man none of the family has ever heard of. The pair abduct the father, Aamir, after Pat shoots Aamir's attractive teenage daughter in the hand. Det. Sgt. Alex Morrow wonders if religious bigotry prompted the crime, but she soon realizes that money is the key when Pat and Eddy demand a 2 million ransom, an exorbitant sum for a family of modest means. As Morrow and her partner, Det. Sgt. Grant Bannerman, dig deeper into the lives of the Anwars, particularly middle child Omar, they begin to untangle a complex web of intrigue. Meanwhile, the frantic kidnappers realize too late they're out of their depth. Mina (Slip of the Knife), who's as much at ease with cops as she is with the people they chase, laces this potent crime thriller with colorful Scottish slang and delivers a sucker-punch climax. (Mar.) (c) Copyright PWxyz, LLC. All rights reserved

Eddy and Pat, two Glasgow yobs, are hired to snatch a man named Bob from a modest home in a Glasgow suburb and hold him for a two-million-pound ransom. They botch the job, finding no one named Bob, accidentally shooting a teenage girl, and snatching the girl's father, a Ugandan émigré who owns a none-too-prosperous convenience store. Police-department sexism leads to DS Alex Morrow's dim rival, Grant Bannerman, being placed in charge of the investigation; but Alex's efforts uncover the only leads in the case. An award-winning crime novelist, Mina knows her gritty hometown, and Still Midnight offers a stunning portrait of transcendent bleakness. Alex is close to a breakdown; curiously, we don't learn the full why for 270 pages. The kidnap victim is haunted by his mother's rape as they fled Uganda. Even Eddy and Pat are tormented. Similarly, Glasgow is vividly portrayed as an avatar of urban poverty, violence, and utter despair; the lashing rains and raw winds of October in Scotland only serve to deepen the sense of desperation. Grim but compelling.--Gaughan, Thomas Copyright 2010 Booklist

Mina trades the glum intensity of her exposs of Glasgow's seamy side (Slip of the Knife, 2007, etc.) for a police procedural that reveals strikingly similar results. It might have been a routine home invasion. Two men in balaclavas, backed up by a third waiting in the car, push their way into a house, demand to speak to Bob, shoot a family member in the hand and, when they see Bob's not there, leave with the head of the family, for whose safe return they demand 2 million as "payback. For Afghanistan." Only the details don't make any sense. Ugandan-born shopkeeper Aamir Anwar and his family apparently have nothing to do with Afghanistan, with anyone named Bob, or with the remotest likelihood of assembling such a staggering ransom. When Strathclyde CID gets the case, it goes not to DS Alex Morrow, who's next in line as lead detective, but to her despised rival, DS Grant Bannerman, who shunts Alex into meaningless busywork and ignores the all-important lead she hands him. The heroine's home life, if you can call it that, is as dispiriting as her professional life. She dreads heading home to the husband who tells her, "I hate who you make me." After a whirlwind first movement, Mina settles in to what she does beststripping her heroes and villains bare of every self-serving piety and protective illusion and exposing what's beneath. Little suspense, less mystery, but a startling exploration of characters who stubbornly refuse to stay in the boxes they've been assigned. Copyright Kirkus Reviews, used with permission.
More book reviews at iDreamBooks.com