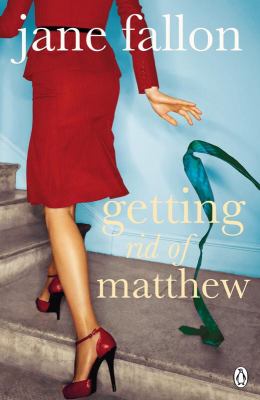 Getting rid of Matthew / Jane Fallon.

Genre/Form: Romance fiction. | Humorous fiction. | Domestic fiction.DDC classification: Free Fiction Subject: When Matthew Helen's lover of the past four years, finally decides to leave his wife Sophie (and their two daughters) and move into Helen's flat, she should be over the moon. The only trouble is, she doesn't want him any more!
Tags from this library: No tags from this library for this title. Log in to add tags.
Fiction notes: Click to open in new window

Getting Rid of Matthew is the brilliantly witty novel from Jane Fallon.

What to do if Matthew, your secret lover of the past four years, finally decides to leave his wife Sophie and their two daughters and move into your flat, just when you're thinking that you might not want him anymore . . .
PLAN A- Stop shaving your armpits. And your bikini line. Tell him you have a moustache that you wax every six weeks Stop having sex with him. Pick holes in the way he dresses. Don't brush your teeth. Or your hair. Or pluck out the stray hag-whisker that grows out of your chin. Buy incontinence pads and leave them lying around
PLAN B- Accidentally on purpose bump into his wife Sophie Give yourself a fake name and identity Befriend Sophie Actually begin to really like Sophie Snog Matthew's son (who's the same age as you by the way. You're not a paedophile) Buy a cat and give it a fake name and identity Befriend Matthew's children. Unsuccessfully Watch your whole plan go absolutely horribly wrong
Getting Rid of Matthew is the sharp and hilariously funny novel from Jane Fallon. It was also a Richard and Judy pick.
Praise for Jane Fallon-
'Intelligent, edgy and witty' Glamour
'A brilliant and original tale' Sun
'Chick lit with an edge' Guardian
Jane Fallon is the multi-award-winning television producer behind shows such as This Life , Teachers and 20 Things to Do before You're 30 . Her novels are Getting Rid of Matthew , Foursome, Got You Back and The Ugly Sister .

When Matthew Helen's lover of the past four years, finally decides to leave his wife Sophie (and their two daughters) and move into Helen's flat, she should be over the moon. The only trouble is, she doesn't want him any more!

Brit TV producer Fallon takes "careful what you wish for" to hilarious heights in her debut novel, a comedy of errors triggered by a mistress who discovers thrice-weekly hookups with her married lover are better than a 24/7 relationship with him. Helen, office staffer at a public relations firm catering to desperate D-list celebrities, is fast approaching her 40th birthday with little chance of swimming out of the secretary pool or snagging a full-time commitment from Matthew, her middle-aged lover and "relay relationshipper." When Matthew abruptly leaves wife Sophie and preteen daughters Suzanne and Claudia to move in with Helen, she's not sure it's the happy ending she prefers. Thus begins a head-spinning ruse to convince Matthew to go back home and to persuade Sophie and her scene-stealing pair of potty-mouthed children to take him back: Helen invents a new persona, hard-charging PR whiz "Eleanor," who befriends Sophie and gives her advice to repair her shattered marriage. The scheme gets more elaborate when Helen/Eleanor falls for Matthew's estranged eldest son. This delightfully fizzy chick lit caper goes disappointingly flat before the finish, but the surprising and rewarding treat is a bright, grown-up story of two women who discover friendship and trust in one another. (Aug.) (c) Copyright PWxyz, LLC. All rights reserved

"Helen, secretary in a London PR firm, has run afoul of the adage be careful what you wish for, because it might come true. Boss Matthew, after an affair that has lasted years, suddenly leaves his wife and moves into Helen's flat. Helen's solution is to befriend the wife, using an assumed identity, of course, to persuade her to take Matthew back. But as she gets to know Sophie, she likes her too much to burden her with Matthew again. Office life has gotten dicey because she feels tainted by the affair, but there is another Helen in another department, which helps cloud the identities. Further muddying the situation, Helen meets Leo, a thoroughly attractive man. He just so happens to be Matthew's son from a previous marriage and, naturally, hates the woman ruining his father's life. Can this possibly be sorted out? Does Helen get stuck with Matthew? Do Sophie and Leo discover Helen's true identity? Does she escape her dead-end job and get a real career? Read and find out."--"Hoover, Danise" Copyright 2007 Booklist

The other woman attempts to make amends in this debut novel from Fallon, a U.K. television producer and partner of comedian Ricky Gervais. For four years, "nearly forty" Helen has been treading water watching those around her achieve, thrive and take risks. Helen prefers to be an observer and let things happen. Aimlessly she attaches herself to jobs and people that don't suit her in an effort to approximate a grown-up life. Helen's achievements are few: She holds a dead-end job as a personal assistant at a middling British PR firm, maintains one friendship, lives in a shabby apartment and has a very married boyfriend named Matthew. The novel centers around this illicit relationship. Matthew was Helen's boss when he seduced her. He correctly identified her vulnerability and quickly insinuated himself into the role of lover. Matthew is a cad who relishes his roles as PR chieftain, smug married father of two and seducer of younger women (it becomes clear that Helen is but one of Matthew's conquests). Nothing new up to this point, but thankfully the novel gets moving when Helen decides to dump Matthew. Here's the twist: Rather than gaining her freedom, Helen gets a hirsute roommate. When Helen gives Matthew the brush off, he falls apart and comes back groveling. It seems Matthew would rather heave over his family and start life anew with his young mistress than face life as a dumped lover stuck in suburban hell. To get rid of her new and unwelcome flatmate, Helen devises a plan to befriend his estranged wife, Sophie, and get the couple back together. While madly scheming to return Matthew to his family nest, Helen befriends Sophie and starts to take responsibility for her misdeeds. Refreshingly, this heroine doesn't waste time justifying her actions. Helen sees the error of her ways and sets about doing the right thing. Inevitably, she makes some comical missteps, but her heart remains in the right place. Fallon's debut has bright spots: The leading lady is memorable (one of the few singletons not obsessed with her baby-making status) and the dialogue pops. Pacing seems to be the main flaw, as the action sags in the middle and never regains momentum. Fallon's debut is sharp enough, but a languishing plot dulls the author's wit. Copyright ©Kirkus Reviews, used with permission.
More book reviews at iDreamBooks.com