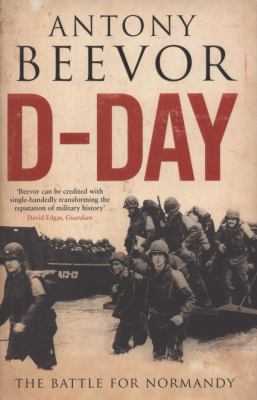 DDC classification: 940.542142 Summary: Making use of overlooked and new material from over 30 archives in half a dozen countries, 'D-Day' is a vivid and well-researched account yet of the battle of Normandy.--Publisher.
Tags from this library: No tags from this library for this title. Log in to add tags.
Fiction notes: Click to open in new window

The very scale of the undertaking and its meticulous planning were unprecedented, but although the beachheads were established as planned, it soon became clear that the next stage of the battle would be far more difficult than anyone had imagined. The thick hedgerows of Normandy were ideal for the defender, and the Germans, especially the Waffen-SS divisions, fought with cunning and a desperate ferocity. As they made their way inland, the British, Canadian and American forces became involved in battles whose savagery was often comparable to the Eastern Front.

Casualties began to mount and so did the tension between the principal commanders on both sides. French civilians, caught in the middle of these battlefields or under Allied bombing, endured terrible suffering. Even the joys of Liberation had their darker side. The war in northern France marked not just a generation but the whole of the post-war world, profoundly influencing relations between America and Europe.

Making use of overlooked and new material from over thirty archives in half a dozen countries, D-Day is the most vivid and well-researched account yet of the battle of Normandy. As with Stalingrad and Berlin - The Downfall , Antony Beevor's gripping narrative conveys the true experience of war.

Making use of overlooked and new material from over 30 archives in half a dozen countries, 'D-Day' is a vivid and well-researched account yet of the battle of Normandy.--Publisher.

The story of operation Overlord and the French-coast landings on D-day, June 6, 1944, has been recounted many times both in print and on the big screen. It is certainly a story worth retelling, and Beevor (Stalingrad) does it well, combining contemporary accounts with a moving narrative, beginning on June 2, 1944, and ending with the liberation of Paris in August. He relates the operation from all points of view, from the commanders to the men on the beaches, giving equal time to all participants and including, more unusually, the experiences of the French civilians involved. Civilian casualties ran into the tens of thousands, a fact either ignored or given short shrift in most books. Beevor shifts perspectives smoothly, enabling the reader to follow along without confusion, from the U.S. landings on Omaha and Utah beaches to the British and Canadians landings on Sword and Juno beaches, to the airborne incursion and the German response. Verdict Beevor has written an in-depth campaign history, comparable to Max Hastings's Overlord and Carlo D'Este's Decision in Normandy, that should be read by beginners and experts alike. [See Prepub Alert, LJ 6/15/09.]-David Lee Poremba, Windermere, FL (c) Copyright 2010. Library Journals LLC, a wholly owned subsidiary of Media Source, Inc. No redistribution permitted.

Beevor has established a solid reputation as a chronicler of WWII's great eastern front battles: Stalingrad and Berlin. In addressing D-Day, he faces much wider competition with historians like Stephen Ambrose and Max Hastings, who also use his method of integrating personal experiences, tactical engagements, operational intentions and strategic plans. Beevor combines extensive archival research with a remarkable sense of the telling anecdote: he quotes, for example, an officer's description of the "bloody mass of arms and legs and heads, [and] cremated corpses" created by artillery fire as the Germans tried to escape the Allied breakout. He is sharply critical of senior commanders on both sides: Bernard Montgomery's conceit; Adolf Hitler's self-delusion; Dwight Eisenhower's mediocrity. His heroes are the men who took the invasion ashore and carried it forward into Normandy in the teeth of a German defense whose skill and determination deserved a better cause. The result was a battle of attrition: a "bloody slog" that tested British and American fighting power to the limit-but not beyond. Beevor says that it wasn't Allied forces' material superiority but their successful use of combined arms and their high learning curve that were decisive in a victory that shaped postwar Europe. Maps, illus. (Oct. 13) (c) Copyright PWxyz, LLC. All rights reserved

Beevor (Univ. of London) has written a powerful history of the battle for Normandy in WW II. His detailed narrative covers the entire campaign from General Dwight Eisenhower's decision to launch the invasion in June 1944 all the way to the liberation of Paris on August 25, 1944. His research has taken him to more than 30 archives in six countries. The result is a major account of the Normandy invasion, in which Beevor follows the Allied forces in their campaign from Normandy to Paris. In his narrative, he describes the Normandy campaign as seen not only by the US, British, French, and German forces, but also by the French people who suffered from the Allied bombing and shelling. Beevor's history is enhanced by an excellent series of maps and illustrations. Summing Up: Highly recommended. All levels/libraries. K. Eubank emeritus, CUNY Queens College

The success of the Normandy campaign was no sure thing, despite meticulous planning, numerical superiority, and virtually complete command of the air. Many things could go wrong, and many of them did. The weather was unpredictable; precise timetables and coordination between air, land, and sea forces often broke down; and the Allied high command was plagued by internal bickering and political meddling. Beevor traces the campaign from the embarkation from English ports through the landings, the breakout, and de Gaulle's triumphal entry into liberated Paris. Of course, we know how the story ends, but Beevor is a superb storyteller who captures the sweep of a massive effort while enriching his narrative with the experiences of ordinary soldiers. He is particularly effective in describing the strains within the alliance. Churchill and de Gaulle intensely disliked each other, and British general Montgomery constantly disagreed with both Eisenhower and other American commanders. Ultimately, their success owed much to the valor and adaptability of soldiers on the ground as well as good luck. This is an outstanding, comprehensive account, ideal for general readers.--Freeman, Jay Copyright 2009 Booklist

The grand Allied invasion of Normandy had myriad ways to go wrong, writes historian Beevor (The Mystery of Olga Chekhova, 2004, etc.) in this skilled account. Miraculously, it did not. "Everyone in Britain knew that D-Day was imminent," the author writes, "and so did the Germans." What kept the Germans from knowing the exact details of the attack is the stuff of legendand a massive program of disinformation and double-agenting, which Beevor deftly relates. The larger outlines of the story are well-known; historians and journalists from John Keegan to Cornelius Ryan have had their say about the matter. To this Beevor adds sharp observations derived from the archives, among them the unsettling fact that just before the invasion almost every American unit involved was rated "unsatisfactory," most having never experienced combat before. Fortunately, the Germans across the English Channel were divided in how to respond. As the author notes, Erwin Rommel wanted to concentrate his troops near the landing sites, while his superior officers wanted to assemble a mighty counterattack in the woods north of Paris. Elements of both strategies were hastily assembled as needed, and in either event they cost the Allies plenty. One of the strongest elements of the book is Beevor's inclusion of sometimes overlooked and discounted actors, including French Resistance forces and veterans of the Polish army who had made their way west, and who told their French counterparts, "You will be liberatedbut we will be occupied for years and years." As the author writes, the Germans had an international army, too, including Cossack forces that were mowed down as they rode into battle. His account of atrocities on both sides, of errors committed and of surpassing bravery makes for excellentthough often blood-soakedreading. Beevor gets better with each book. Copyright Kirkus Reviews, used with permission.
More book reviews at iDreamBooks.com