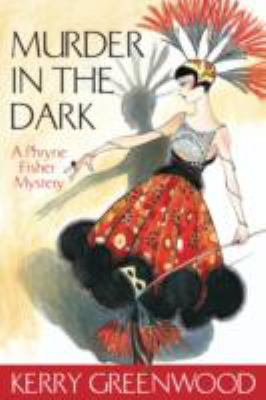 Murder in the dark / Kerry Greenwood.

| Mystery and detective stories.DDC classification: Rental Fiction
Contents:
A Phryne Fisher mystery
Includes bibliographical references.
Subject: The delectable Phryne Fisher has been invited to the Last Best party of 1928. When three of the guests are kidnapped Phryne finds she must puzzle her way through the scavenger hunt clues to retrieve the hostages.
Tags from this library: No tags from this library for this title. Log in to add tags.
Fiction notes: Click to open in new window
Total holds: 0

The delectable Phryne Fisher has been invited to the Last Best party of 1928. When three of the guests are kidnapped Phryne finds she must puzzle her way through the scavenger hunt clues to retrieve the hostages. Another sparkling mystery from Australia's Queen of Crime, Kerry Greenwood.

The delectable Phryne Fisher has been invited to the Last Best party of 1928. When three of the guests are kidnapped Phryne finds she must puzzle her way through the scavenger hunt clues to retrieve the hostages.

Australian author Greenwood's fine Phryne Fisher mystery combines suspense and humor with a taut race to unmask a master assassin before he can strike again. The irrepressible and defiantly unflappable Phryne Fisher decides to attend a lavish four-day celebration in Melbourne, "the Last Best Party of 1928," despite anonymous and deadly warnings to keep away, which include a coral snake. One of the party's hosts, Gerald Templar, becomes worried after Tarquin, the orphan boy he's adopted, disappears. The connection between Tarquin's vanishing and the escalating acts of violence from the killer who calls himself the Joker is far from obvious, and Fisher has no shortage of suspects to consider among the eccentric guests, including a man who's modeled himself on Oscar Wilde. The Joker's identity will surprise many readers, but as usual for this long-running series (Cocaine Blues, etc.), the major pleasures come from Greenwood's wry voice and the larger-than-life Fisher. (Mar.) (c) Copyright PWxyz, LLC. All rights reserved

Phryne Fisher, the irrepressible Australian flapper-cum-amateur-sleuth, returns for another adventure. It's the Christmas season, and Phryne's been invited to a big party. She doesn't plan on attending, but when somebody starts sending her nasty letters telling her she'd better not show up, well, she's just gotta go. Regular readers of this entertaining series won't be surprised to learn that something bad soon happens (three people are kidnapped, to be specific), or that Phryne is soon knee-deep in mystery and mayhem. The sixteenth Fisher novel has all the qualities of its forerunners: a snazzy, jazzy, outspoken heroine; a cast of engaging supporting players; and a sharply plotted mystery. As usual, too, the author vividly creates the setting 1920s-era Melbourne and really makes us feel as though we've spent some time there. Another strong entry in a consistently entertaining series.--Pitt, David Copyright 2009 Booklist

A party invitation leads Phryne Fisher, liberated woman and amateur sleuth, on a hunt for a ruthless killer. Enjoying the Christmas season with her extended family and her lover Lin Chung, Phryne (Death Before Wicket, 2008, etc.) wonders whether to accept the invitation to the Last Best Party of 1928. Her mind is made up by the arrival of a deadly snake disguised as a Christmas gift and a note suggesting she forego the party. Never one to be cowed, Phryne journeys to the rented estate of Gerald and Isabella Templar, an extravagantly comely brother and sister who, having invested most of their fortune on wild parties in Europe, are continuing their raffish ways in Australia. Isabella's pet, a lovely girl child, has already disappeared, and soon after Phryne's arrival, Gerald's Tarquin, a beautiful and obnoxious young boy, goes missing as well. Hooking up with Nicholas Booth, a handsome young man whom she suspects is a policeman, Phryne wends her way through fabulous dinners and scandalous hashish-fueled entertainments looking for an assassin hired to kill the golden pair. Taunted by a trail of written puzzles, she follows the clues, makes friends with the staff, and relies on some toughs sent by her friends as back-up. Phryne and Nicholas both face death before the final pieces fall into place. One of the most exciting and dangerous of the adventures into which Phryne's fabulous and risky lifestyle have led her. Copyright Kirkus Reviews, used with permission.
More book reviews at iDreamBooks.com