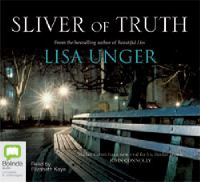 DDC classification: 813.6 Read by Elizabeth Kaye.Summary: Ridley Jones is being careful about where she steps and trying to get on with her life when a seemingly mundane act - picking up a few envelopes of prints at a photo lab - puts her at the nexus of a global network of crime. A shadowy figure of a man appears in almost every picture she's taken in the last year, lurking just far enough away to make identification impossible.
Total holds: 1

Recently, Ridley Jones stepped off a street corner and into an abyss of violence, deception, and fear. She is being a lot more careful about where she steps and trying to get on with her life when another seemingly mundane act - picking up a few envelopes of prints at a photo lab - puts Ridley at the nexus of a global network of crime. A shadowy figure of a man appears in almost every picture she's taken in the last year, lurking just far enough away to make identification impossible. Everyone from the federal government to the criminal underworld wants to know who the man is - and where he is - and some people are willing to kill to find out. <p>Now the FBI is at her door, some serious bad guys are following her every move, and the family she once loved and relied on is more distant than ever. Ridley has never felt so confused or alone in her life. Everyone she loves has turned out to be a stranger - she even feels like a stranger to herself. Is she a product of nature or nurture?</p> <p>At once hunting down a ghost and running for her life, Ridley doesn't know if she ever had the power to shape her own destiny or if love exists anywhere beyond her imagination. The only thing Ridley knows for sure is that she has to get to the truth about herself and her past if she's ever going to find her way home.</p> <p>Charged with relentless intensity and kinetic action, playing out with unnerving suspense on the streets of New York and London, and seen through the terrified but determined eyes of a young woman whose body and heart are pushed to the point of shattering, Sliver of Truth is another triumph from the New York Times bestselling author of Beautiful Lies.</p>

Ridley Jones is being careful about where she steps and trying to get on with her life when a seemingly mundane act - picking up a few envelopes of prints at a photo lab - puts her at the nexus of a global network of crime. A shadowy figure of a man appears in almost every picture she's taken in the last year, lurking just far enough away to make identification impossible.

Freelance journalist Ridley Jones stops by the photo lab to pick up her pictures and is taken in for questioning by FBI agents on her way home. It seems that a mysterious figure is hovering in the background in several of her photos, and Special Agent Dylan Grace believes that the figure is Ridley's Uncle Max, whom she thought was dead. In Unger's follow-up to Beautiful Lies, Ridley must face the fact that her beloved uncle may not only be alive but that he wasn't the man she believed him to be. The FBI wants her to lead its agents to him, but she doesn't completely trust anyone now, including her boyfriend, Jake, who informs her that Max was part of a vicious crime ring. Determined to discover the truth in the web of lies surrounding her, Ridley decides to do some investigating on her own and encounters danger and deception at every turn. A fast-paced story that readers will find difficult to put down; recommended. [See Prepub Alert, LJ 9/15/06.]-Linda Oliver, MLIS, Colorado Springs (c) Copyright 2010. Library Journals LLC, a wholly owned subsidiary of Media Source, Inc. No redistribution permitted.

Ridley Jones thought her faux uncle Max (who was actually her father) was long dead. But apparently, no one else did; not the FBI, the Armenian mob, the woman who identified Max's corpse, or Jones's boyfriend, Jake. Each want Max for different reasons, and Jones becomes the tool with which they hope to bring him out into the open. In an effort to figure everything out, Jones recruits contacts, but it seems every time she does, they end up dead. Unger's second novel featuring Jones packs a lot of action, humor and drama. Jenna Lamia improves these elements in this first-person novel with a light, smooth voice that fits with Jones personality. Within the first hour, Lamia's soft tone reverberates with attitude or sincerity depending on the context, while her ability to inject personality into the narrative aspects of the story makes it all the more enjoyable. She tackles accents, gender differentials and sarcasm with great ease, leaving listeners to lose themselves in Unger's tale of intrigue. Simultaneous release with the Crown hardcover (Reviews, Oct. 23). (Jan.)(c) Copyright PWxyz, LLC. All rights reserved

Unger's popular debut, Beautiful Lies (2006), introduced readers to Ridley Jones, a New York freelance writer who rescues a toddler who wanders onto a busy Manhattan street. The press attention Ridley's heroic act attracts brings to the surface a series of startling truths, which Ridley's adoptive parents have kept from her all her life. (They gained custody of Ridley through Project Rescue, an organization with links to organized crime.) Ridley's late, beloved uncle Max, it seems, was really her father, a complicated man with a dark, twisted side. In this sizzling sequel, a shadowy figure in a trio of photos prompts Ridley to wonder whether Max is indeed dead. Unger's plot bursts from the starting gate and never lets up, as Ridley pieces together the puzzle that is her past. Just a footstep or two behind her is rogue FBI agent Dylan Grace, who has his own distressing motivations for wanting to know Max's whereabouts. The deeper Ridley digs, the more she doubts herself and the uncle she thought she knew. But Ridley (who suggests a more serious version of Janet Evanovich's self-deprecating Stephanie Plum) is never deterred: Sometimes there is only one choice in the pursuit of the truth; sometimes turning away just isn't an option. --Allison Block Copyright 2006 Booklist

More identity crisis for New York City journalist Ridley Jones in this murky follow-up to Unger's debut (Beautiful Lies, 2006). Just when she thought she'd figured out who her real father is, single working girl Ridley is confronted with fresh evidence that her dead Uncle Max Smiley, revealed a year ago (and in Unger's previous book) to be her biological father, might in fact still be alive, and responsible for a series of ghastly assaults on women. Max, an abused child himself, was a self-made real-estate developer and the shadowy head of the Project Rescue organization, which ostensibly saved at-risk children from abusive parents, but in some cases actually abducted children and placed them in foster homes. Ridley's adoptive parents, Ben and Grace Jones, were also involved in Project Rescue, and adopted Ridley as a child. At this point in her life, Ridley is still picking up the pieces of her identity, having been involved in the last year with Jake, a former Project Rescue baby who is still obsessed with Max's whereabouts. Meanwhile, Ridley is being trailed by FBI Special Agent Dylan Grace, who ties her to the recent disappearance of a New York Times journalist, Myra Lyall. In a development that turns these characters into paranoid, damaged people, it's revealed that Agent Grace's mother happened to have been a spy and one of Max's victims. And with everyone looking for Max, possibly at the center of a sex slave trade, the trail leads naturally to Ridley, the beloved daughter he will surely reveal himself to at the novel's 11th hour. Ridley is a character still in search of herself, and this effort offers appealing moments of first-person honesty, but could lose readers unfamiliar with Unger's first. Copyright ©Kirkus Reviews, used with permission.