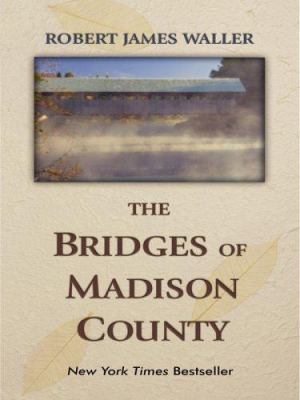 | Madison County (Iowa) -- FictionGenre/Form: Romance fiction. | Pastoral fiction. | Large type books.DDC classification: 813/.54 Summary: A photographer searching for the covered bridges of Madison County, and a farm wife waiting for the fulfillment of a girlhood dream, find a love so intense that life is never the same again.
Tags from this library: No tags from this library for this title. Log in to add tags.
Fiction notes: Click to open in new window

A timeless, universally appealing story of love and loss. In just four days, two people find one another and commit themselves to each other for a lifetime even though they remain apart.

A photographer searching for the covered bridges of Madison County, and a farm wife waiting for the fulfillment of a girlhood dream, find a love so intense that life is never the same again.

Followed by: A thousand country roads.

This is the story of four days that change forever the lives of two lonely people. Robert Kincaid is a roving photographer for National Geographic and Francesca Johnson is a housewife whose marriage suffers from a lack of romance. Francesca's family is out of town when Kincaid arrives on the scene, and the pair are instantly attracted. They soon become lovers, and Kincaid asks Francesca to run away with him, but she refuses. Francesca stays loyal to her family, and memories of Kincaid are all that remain. Contrived, unrealistic dialog detracts from a well-plotted, quick, and pleasant read. For larger popular fiction collections. Bettie Spivey Cormier, Charlotte-Mecklenburg P.L., Charlotte, N.C.(c) Copyright 2010. Library Journals LLC, a wholly owned subsidiary of Media Source, Inc. No redistribution permitted.

Quietly powerful and thoroughly credible, Waller's first novel (he previously wrote two books of essays) describes the profound love between a photographer and an Iowa farmer's wife who, together for only four days, never lose their feelings for each other. In August 1965, 52-year-old divorce Robert Kincaid packs his pickup truck and travels to Iowa's Madison County, the location of seven covered bridges he is to photograph for National Geographic . There, he asks directions of Francesca Johnson, alone at home while her husband and two children visit the Illinois State Fair. Initially, neither Robert nor Francesca expects their random encounter to lead to seduction, yet their mutual desire is undeniable. Waller tells their story as though it were nonfiction, claiming to have heard about Francesca from her children after her death, read her journals, seen Robert's relics of those four days and interviewed a jazz musician who knew the photographer. Scenes between the lovers are movingly evoked and moments with Francesca, who celebrates her birthday 22 years later by reflecting on her brief time with Robert, are particularly poignant. An erotic, bittersweet tale of lingering memories and forsaken possibilities. Photos of covered bridges serve as illustrations. 35,000 first printing. (Apr.) (c) Copyright PWxyz, LLC. All rights reserved

Here's a Hallmark card for all those who have loved and lost: a mushy memorial to a brief encounter in the Midwest. One enchanted afternoon, across her Iowa farmyard, Francesca Johnson sees a stranger: ``his eyes looked directly at her, and she felt something jump inside.'' He reminds her of a gazelle, make that a leopard or, better yet, ``some star creature who had drafted in on the tail of a comet,'' for obviously he's come ``a long way, across more than miles.'' In fact, 52-year-old National Geographic photographer Robert Kincaid has driven from Washington State to shoot the covered bridges of Madison County; what wonderful luck for these soon-to-be-lovers, this hot August of 1965, that 45-year- old Francesca's husband Richard, along with their two children, is at a state fair for a week. The Italian Francesca, who married Richard 20 years before in Naples but now feels ``compromised and alone,'' asks the equally lonely, equally sensitive Robert to dinner. That's Day One; on Day Two, they fall in love; and when they make whoopee, it's as much spiritual as physical, what with Robert whispering, ``I am the highway and a peregrine and all the sails that ever went to sea.'' On Day Four, their last together, Francesca announces she must stay with her family, but their bond is forever: As Robert says, ``in a universe of ambiguity, this kind of certainty comes only once.'' Looking back years later, Francesca concludes that undying, romantic, extramarital love is compatible with family values. That conclusion should sit well with the target audience; for as fake and pretentious as it is, this first novel is based on hard-nosed commercial calculations. The publisher, promising a big push, clearly expects its silly goose to lay a golden egg, and, who knows, maybe it will.
More book reviews at iDreamBooks.com