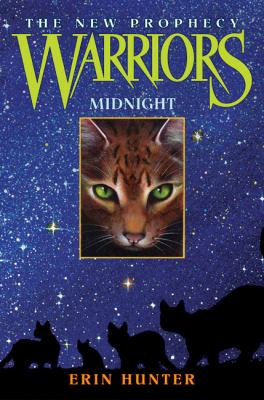 | Young adult fiction.DDC classification: [Fic] Online resources: Contributor biographical information | Publisher description Summary: Called by StarClan to fulfill a new prophecy, a group of young cats sets out on a long and dangerous journey, knowing only that trouble threatens the forest, as the adventures of the warrior clans continue.
Tags from this library: No tags from this library for this title. Log in to add tags.
Fiction notes: Click to open in new window
Total holds: 0

<p>Erin Hunter's #1 nationally bestselling Warriors series continues in Warriors: The New Prophecy!</p> <p>The first book in this second series, Warriors: The New Prophecy #1: Midnight, brings more adventure, intrigue, and thrilling battles to the epic world of the warrior Clans.</p> <p>The wild cats of the forest have lived in peace and harmony for many moons--but now, strange messages from their warrior ancestors speak of terrifying new prophecies and a mysterious danger.</p> <p>Brambleclaw, a warrior of ThunderClan, may be the cat with the fate of the forest in his paws. Now he will need all the courage and strength of the greatest warriors to save the Clans.</p>

Called by StarClan to fulfill a new prophecy, a group of young cats sets out on a long and dangerous journey, knowing only that trouble threatens the forest, as the adventures of the warrior clans continue.

In this first book spawned from the Warriors series, a new generation receives its own set of prophecies. A cat from each clan, including Firestar's own daughter, Squirrelpaw, must leave the forest to follow the path set out by StarClan. The novel skillfully weaves plot and the growth of the characters into the complex layers of the cat clans themselves. (c) Copyright 2010. The Horn Book, Inc., a wholly owned subsidiary of Media Source, Inc. No redistribution permitted. All rights reserved.

This first-in-series animal adventure with a fine plot but recurring preciousness will satisfy a particular readership. Four cat Clans live in bordering countryside territories in tentative peace. They meet only at ritualized times. Each Clan has warriors, apprentices, a medicine cat and a leader. Days are spent hunting and patrolling until a few select cats receive cryptic dreams from their mutual gods about a prophecy of doom. One chosen cat from each clan and two others who refuse to stay behind sneak away together and embark on a journey they don't understand, away from the forest and into dangerous Twoleg territory. A few cats are well characterized, though the sheer number named and the names themselves (Brambleclaw, Squirrelpaw) make them blend. Use of "meowed" and "mewed" instead of "said" is contrived (and unintentionally funny); the word "kittypet" (for those who live with humans) is distractingly cloying. Structurally solid; this will please Redwall-genre fans and cat devotees. (name chart, maps) (Fantasy. 8-11) Copyright ©Kirkus Reviews, used with permission.
More book reviews at iDreamBooks.com