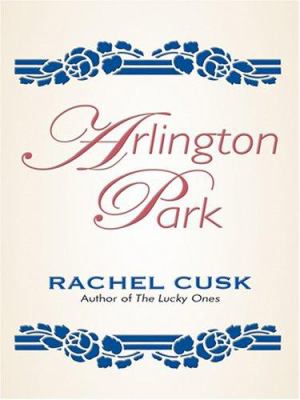 Arlington Park, a modern-day English suburb very much like its American counterparts, is a place devoted to the profitable ordinariness of life. Amidst its leafy avenues and comfortable houses, its residents live out the dubious accomplishments of civilization: material prosperity, personal freedom, and moral indifference. In Arlington Park, men work, women look after children, and people generally do what's expected of them. It's a world awash in contentment but empty of belief, and riven with strange anxieties. How are they to know right from wrong? How should they use their knowledge of other people's sufferings? What is the relationship of politics to their own domestic arrangements?
Set over the course of a single rainy day, the novel moves from one household to another, and through the passing hours conducts a deep examination of its characters' lives: of Juliet, enraged at the victory of men over women in family life; of Amanda, warding off thoughts of death with obsessive housework; of Solly, who confronts her own buried femininity in the person of her Italian lodger; of Maisie, despairing at the inevitability with which beauty is destroyed; and of Christine, whose troubled, hilarious spirit presides over Arlington Park and the way of life it represents.
Darkly comic, deeply affecting, and wise, Arlington Park is a page-turning imagining of the extraordinary inner nature of ordinary life, by one of Britain's most exciting young novelists.

Juliet is enraged at the victory of men over women in family life. Amanda is warding off thoughts of death with obsessive housework. Solly is confronting her own buried femininity in the person of her Italian lodger. Maisie despairs at the inevitability with which beauty is destroyed. And Christine's troubled, hilarious spirit presides over Arlington Park and the way of life it represents.

In the opening pages of this latest from Whitbread winner Cusk (Saving Agnes), Juliet is so incensed by the highhandedness of a wealthy dinner host and husband Benedict's indifferent response that she chops off her long, lustrous hair. The novel then moves to other denizens of the morally bankrupt English suburb that gives the book its name. Amanda tries desperately to fit in, finally succeeding in getting several women to drop by for coffee; Maisie ponders art, beauty, and why she left London; Solly learns something about her repressed life from a charismatic Italian boarder. Most of these characters end up at Christine's for a dinner party that clarifies the chilling anomie of places like Arlington Park. Christine would be its soul if it had one; brassy, tipsy, and eager for everyone to make her life fun, she's frustrated by the town's low horizons but exemplifies them as well. Cusk is pitch perfect at capturing the dammed-up people that make Arlington Park what it is, so carefully calibrating their doubts and dismissals that they veer straight off the page. They're not always good company-this reviewer threw the book down halfway through, swearing to get out of town-but in her luminous if disturbing study Cusk has done important work in giving them voice. Highly recommended. [See Prepub Alert, LJ 9/15/06].-Barbara Hoffert, Library Journal (c) Copyright 2010. Library Journals LLC, a wholly owned subsidiary of Media Source, Inc. No redistribution permitted.

In this devastating ensemble novel, Whitbread Award-winner Cusk (Saving Agnes) exposes the roiling inner lives and not-so-quiet desperation of young mothers in the well-to-do London suburb Arlington Park. The book's single day begins with an epic rainstorm that wakes part-time private-school English teacher Juliet Randall, who spent the previous evening at a wealthier neighbor's home and was told, in front of husband Benedict, "You want to be careful.... You can start to sound strident at your age." As Amanda Clapp strains to maintain her house's empty perfection, a multi-kid play date gets out of control. Maisie Carrington feels "imprisoned for life" by her frosty, upper-crust childhood, and can barely contain her violent feelings toward her own daughters. Christine Lanham, a newcomer to the class distinction her marriage has brought her, abhors the hypocrisy that surrounds her, but knows she will never leave her family. The story line coils around each woman's home until it gathers the group for a drunken dinner party, where husbands express pleasure with their privilege while fretting that something feels amiss, and children, exhausted by their mothers' alternating neglect and desperate love, sleep like the dead leaving the women holding hot coals of their silent insights. Their plight is an old story, but Cusk makes it incisively vivid. (Jan.) (c) Copyright PWxyz, LLC. All rights reserved

Rainy Friday in Arlington Park, an upscale London suburb. Juliet Randall sets out for her job as a part-time English teacher at Arlington Park High. After they drop off their children at school, several women meet in Amanda's immaculate kitchen for coffee. Maisie Carrington joins a group for a trip to the mall. Later in the day, Juliet presides over the school literary club. That evening, Christine Lanham and her husband have the Carringtons and the Randalls over for dinner. Solly's fourth child is born. All of the women in these interconnected stories have everything they ever thought they wanted--nice house, nice husband, and children. But though nothing is really wrong, the women often feel swamped by daily messiness; even in Arlington Park, "the force of life came up strong, dealing out its hard facts." As she did in The Country Life (2000) and other previous works, Cusk shows herself to be a master of incisive, unsentimental domestic fiction. Mary EllenQuinn.

Suburban motherhood is no picnic in this latest examination of intertwined lives from British novelist Cusk (The Lucky Ones, 2004, etc.). The action takes place during a single rainy day in a well-pruned English suburb. But though its streets are tree-lined, its shops exclusive, its houses ranging from pretty to grand, Arlington Park is not entirely sheltered from the problems of the world. While dropping their older children at school and toting their toddlers around on errands, the no-longer-so-young mothers worry about impoverished gypsies, people dying of malnutrition, earthquake victims in Indonesia, ecological destruction and the four-year-old girl abducted from their own prosperous enclave. (She's found dead toward the end, a dnouement in keeping with the novel's generally dark tone.) Is there something they should do about these unpleasant realities? How can they help anyone else, when they feel so helplessly adrift themselves? In previous fiction, and in her poignant memoir A Life's Work (2001), Cusk sensitively balanced an honest depiction of parenting's often overwhelming demands with tender acknowledgment of its joys. In this book, children are nearly always a burden, husbands prompt little besides bitterness and the one protagonist who's still working finds her job as a schoolteacher mostly a reminder of the intellectual ambitions she failed to fulfill. As usual with this deft and astute writer, the prose is elegant, the characterizations spot-on. Frustrated Juliet, obsessive Amanda, conflicted city transplant Maisie, pregnant-yet-again Solly and in particular angrily exuberant, confrontational Christine are wholly believable and uncomfortably familiar. Such is the author's skill that few readers will be able to escape a sense of squirming empathy for these women's frequent bouts of self-pity and vertiginous feeling of not being in control of their relatively privileged lives. The sour aftertaste their stories leave, however, is a new development in Cusk's work--and not a welcome one. Accomplished, honest and uncompromising, but not a whole lot of fun. Copyright ©Kirkus Reviews, used with permission.
More book reviews at iDreamBooks.com