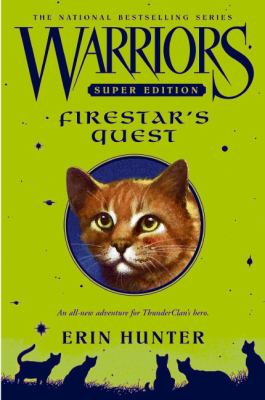 | Quests (Expeditions) -- Juvenile fictionGenre/Form: Fantasy fiction. | Children's fiction.DDC classification: [Fic] Summary: Firestar, leader of the Thunder Clan, sets off on a harrowing journey to find a long-lost clan of cats that had been forced to leave the forest many moons ago.
Tags from this library: No tags from this library for this title. Log in to add tags.
Fiction notes: Click to open in new window
No physical items for this record

Set just after the events of Warriors #6: The Darkest Hour, this Super Edition follows the ThunderClan leader Firestar on a quest to uncover a long-forgotten truth.

It is a time of peace between the warrior Clans, and all four are thriving. Then Firestar, leader of ThunderClan, discovers a terrible secret: the warrior ancestors of StarClan have lied to him. Firestar must embark on a perilous journey to right their wrong--and nothing will ever be the same again.

Join the legion of fans who have discovered the epic adventures, fierce warrior cats, and thrilling fantasy world of the mega-bestselling Warriors series. This stand-alone entry is perfect for new readers and dedicated fans alike.

Contains excerpt from: The sight.

Firestar, leader of the Thunder Clan, sets off on a harrowing journey to find a long-lost clan of cats that had been forced to leave the forest many moons ago.

Fans of the Warriors books will excitedly delve into Firestar's Quest, the latest addition to Erin Hunter's bestselling series. In this "super edition" standalone story, Firestar, leader of ThunderClan, discovers that the ancestral StarClan has lied to him, which leads him on a quest to uncover hidden secrets. (HarperCollins, $17.99 528p ages 10-up ISBN 9780-06-113164-6; Sept.) (c) Copyright PWxyz, LLC. All rights reserved

Firestar, leader of the ThunderClan, faces what may be his greatest challenge yet in attempting to right an ancient wrong: the refusal by four of the five clans to shelter SkyClan members displaced by Twolegs. Impelled by horrific dreams and accompanied by his mate, Firestar embarks on a dangerous quest to unite the scattered SkyClan cats. This is much longer than previous books in the popular Warriors series, but that will not deter fans, who will relish the scale of the mission, the fast-paced action, and the exploits of old and new friends.--Estes, Sally Copyright 2007 Booklist
More book reviews at iDreamBooks.com