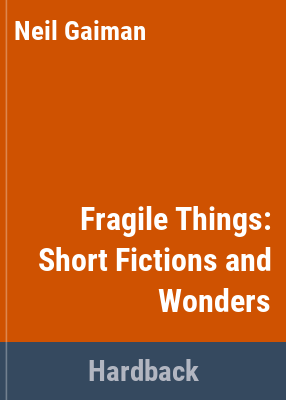 A stunning book of short stories by the acclaimed fantasy writer. The distinctive genius of Neil Gaiman has been championed by writers as diverse as Norman Mailer and Stephen King. With THE SANDMAN Neil Gaiman created one of the most sophisticated, intelligent and influential graphic novel series of our time. Now after the recent success of his latest novel ANANSI BOYS, Gaiman has produced FRAGILE THINGS, his second collection of short fiction. These stories will dazzle your senses, haunt your imagination and move you to the very depths of your soul. This extraordinary book reveals one of the world's most gifted storytellers at the height of his powers.

A study in Emerald -- The fairy reel -- October in the chair -- The hidden chamber -- Forbidden brides of the faceless slaves in the secret house of the night of dread desire -- The flints of memory lane -- Closing time -- Going Wodwo -- Bitter grounds -- Other people -- Keepsakes and treasures -- Good boys deserve favors -- The facts in the case of the departure of Miss Finch -- Strange little girls -- Harlequin valentine -- Locks -- The problem of Susan -- Instructions -- How do you think it feels? -- My life -- Fifteen painted cards from a vampire tarot -- Feeders and eaters -- Diseasemaker's croup -- In the end -- Goliath -- Pages from a journal found in a shoebox left in a greyhound bus somewhere between Tulsa, Oklahoma, and Louisville, Kentucky -- How to talk to girls at parties -- The day the saucers came -- Sunbird -- Inventing Aladdin -- The monarch of the glen.

A study in Emerald -- The fairy reel -- October in the chair -- The hidden chamber -- Forbidden brides of the faceless slaves in the secret house of the night of dread desire -- The flints of memory lane -- Closing time -- Going Wodwo -- Bitter grounds -- Other people -- Keepsakes and treasures -- Good boys deserve favors -- The facts in the case of the departure of Miss Finch -- Strange little girls -- Harlequin valentine -- Locks -- The problem of Susan -- Instructions -- How do you think it feels? -- My life -- Fifteen painted cards from a vampire tarot -- Feeders and eaters -- Diseasemaker's croup -- In the end -- Goliath -- Pages from a journal found in a shoebox left in a greyhound bus somewhere between Tulsa, Oklahoma, and Louisville, Kentucky -- How to talk to girls at parties -- The day the saucers came -- Sunbird -- Inventing Aladdin -- The monarch of the glen.

A mysterious circus terrifies an audience for one extraordinary performance before disappearing into the night, taking one of the spectators along with it... In a novella set two years after the events of American Gods, Shadow pays a visit to an ancient Scottish mansion, and finds himself trapped in a game of murder and monsters... In a Hugo Award-winning short story set in a strangely altered Victorian England, the great detective Sherlock Holmes must solve a most unsettling royal murder... Two teenage boys crash a party and meet the girls of their dreams - and nightmares... In a Locus Award-winning tale, the members of an excusive epicurean club lament that they've eaten everything that can be eaten, with the exception of a legendary, rare, and exceedingly dangerous Egyptian bird... Such marvelous creations and more - including a short story set in the world of The Matrix, and others set in the worlds of gothic fiction and children's fiction - can be found in this extraordinary collection, which showcases Gaiman's storytelling brilliance as well as his terrifyingly entertaining dark sense of humor.

An alternate Victorian England. Months of the Year sitting around chatting. These are some of the ideas firing the 25-plus stories in Gaiman's new collection. With a one-day laydown on September 26. (c) Copyright 2010. Library Journals LLC, a wholly owned subsidiary of Media Source, Inc. No redistribution permitted.

Hot off the critical success of Anansi Boys, Gaiman offers this largely disappointing medley that feels like a collection of idea seeds that have yet to mature. Among the ground covered: an old woman eats her cat alive, slowly; two teenage boys fumble through a house party attended by preternaturally attractive aliens; a raven convinces a writer attempting realism to give way to fantastical inclinations. A few poems, heartfelt or playfully musical, pockmark the collection. At his best, Gaiman has a deft touch for surprise and inventiveness, and there are inspired moments, including one story that brings the months of the year to life and imagines them having a board meeting. (September is an "elegant creature of mock solicitude," while April is sensitive but cruel; they don't get along), but most of these stories rely too heavily on the stock-in-trade of horror, sci-fi and fantasy. Gaiman only once or twice gives himself the space necessary to lock the reader's attention.150,000 announced first printing. (Oct.) (c) Copyright PWxyz, LLC. All rights reserved

Adult/High School-In this collection of stories (and a few poems), storytellers and the act of storytelling have prominent roles. The anthropomorphized months of the year swap tales at their annual board meeting: a half-eaten man recounts how he made the acquaintance of his beloved cannibal; and even Scheherazade, surely the greatest storyteller of all, receives a tribute with a poem. The stories are by turns horrifying and fanciful, often blending the two with a little sex, violence, and humor. An introduction offers the genesis of each selection, itself a stealthy way of initiating teens into the art of writing short stories, and to some of the important authors of the genre. Gaiman cites his influences, and readers may readily see the inflection of H. P. Lovecraft and Ray Bradbury in many of the tales. Horror and fantasy are forms of literature wrought with clich?s, but Gaiman usually comes up with an interesting new angle. This collection is more poetic and more restrained than Stephen King's short stories and more expertly written than China Mieville's Looking for Jake (Ballantine, 2005). Gaiman skips along the edge of many adolescent fascinations-life, death, the living dead, and the occult-and teens with a taste for the weird will enjoy this book.-Emma Coleman, Berkeley Public Library, CA (c) Copyright 2010. Library Journals LLC, a wholly owned subsidiary of Media Source, Inc. No redistribution permitted.

Like the first and second, Gaiman's third collection of unillustrated short pieces (he has comics collections in his portfolio, too) showcases a particular facet of his talent. Smoke and Mirrors0 (1998) effervesced with his jovial parody of fairy tales, Raymond Carver, monster movies, Beowulf0 , and even Bay Watch0 . Adven0 tures in the Dream Trade0 (2002) collects various kinds of memoirs on being a professional fantasist. Parody--in the alternate-world Sherlock Holmes pastiche, "A Study in Emerald," and an imaginary last book of the Bible--and memoir (two reprints from Adventures0 and at least one story, "Closing Time," that Gaiman admits is full of real persons and events) also figure in this book, but most of the contents, including the memory pieces, exude the romanticism, often erotic, that makes his first two novels, Neverwhere0 (1997) and Stardust0 (1998), for all their darkness and grit, so powerfully attractive. Many are love stories, ranging in tone from the lowering super-noir of "Keepsakes and Treasures," in which a multibillionaire, abetted by the genius-sociopath narrator, finds and loses his particular beau ideal0 ; to the sf-tinged horror of "How to Talk to Girls at Parties," in which two randy teens crash the wrong bash; to the love-conquers-all rapture of the poem "The Day the Saucers Came"; to the movingly sad triumph over time in the flat-out sf entry, "Goliath." Less loverly but lovelier are such archromantic tidbits as 15 tiny stories for cards from "a vampire tarot," the council of the personified months in "October in the Chair," the bittersweet shape-shifting of the commedia dell'arte-derived "Harlequin Valentine," and all the other poems. One delight after another, 31 in all, with a thirty-second tucked into the author's introduction. --Ray Olson Copyright 2006 Booklist

Neo-Goth-Pulp-Noir has pretty much been trademarked by Gaiman (Anansi Boys, 2005, etc.), and these 31 jagged slices of life and the afterlife dependably deliver the damaged goods: zombies, dream-haunted kiddies, femmes fatale and fiends. Reprising his role from American Gods (2001) as ex-con, taciturn hunk, superhero and reincarnation of the Norse god Baldur, Shadow shakes things up in "The Monarch of the Glen," battling a primeval beastie and romancing a woodland nymph in the unlikely setting of a tycoon's get-together on the Scottish heath. "Good Boys Deserve Favours" highlights a lonely lad's moony passion for his double bass. "Strange Little Girls," penned to accompany a Tori Amos CD, catalogues the Eternal Feminine from showgirls to Holocaust victims to la belle dame sans merci. "October in the Chair" whimsically features the months as characters. "A Study in Emerald" offers smart, nifty homage to Conan Doyle. In "Harlequin Valentine," Missy the waitress chows down lovingly on the heart of the motley-clad acrobat of the commedia dell'arte, but even that grisly feast is rendered with swooning lyricism. Gaiman again proves himself a perverse romantic, heir not only to Poe and Baudelaire but to the breathless Pre-Raphaelites. (The poetry he includes here, for example, is generally less creepy than drippy.) He wears his pop cred in boldface, and street-smart hipness saturates these eerie epiphanies. But the collection also boasts lush prose, a lack of irony and a winning faith in the enchantment of stories. Expect the unexpected. Then savor the luscious chills. Copyright ©Kirkus Reviews, used with permission.
More book reviews at iDreamBooks.com