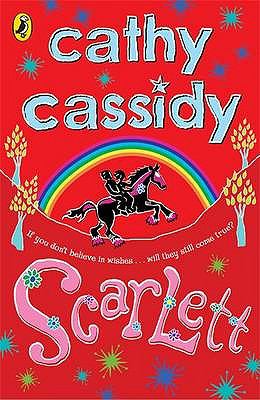 Scarlett's not red like a sunset, she's red with rage! She cannot BELIEVE her mum's sunk so low as to pack her off to Ireland to stay with the dad who left them. Surely he's the reason for everything going wrong, her never being able to stay in a school, rules always just, somehow, seeming to get broken? They won't get round her so easily! But she hasn't reckoned on the gorgeous Kian, and he might just find a way to change Scarlett's mind. There's a chance that - this time - things will be different . . . Visit cathycassidy.com for more . . .

After being expelled from yet another school in London, twelve-year-old Scarlett is sent by her exasperated mother to live with her father, stepmother, and stepsister in Ireland, where, with the help of a mysterious boy, she eventually overcomes her anger and resentment and feels part of a family again. Suggested level: intermediate, junior secondary.

Rebellious Scarlett still has not gotten over her father's cheating and her parents' divorce. When she gets thrown out of yet another school, her mother sends her from London to the Irish countryside to live with her father, his pregnant wife and her stepmother's nine-year-old daughter. Scarlett begs her mother, "Don't make me do it," but in her new home, she finds space-both from her family and in the enchanting surroundings-to start letting go of her anger. She also makes a connection with a mysterious boy, Kian, whom she meets by the lough, riding bareback. Kian tells her about a wishing tree, where people "leave offerings, ask for favors." Cassidy (Indigo Blue) weaves in some lovely images, such as Scarlett's ripping up her old red clothes as ribbons to tie all over the wishing tree for her new baby sister. Readers will appreciate that her biological parents are flawed people. When Scarlett injures her stepsister trying to pierce her nose, her father yells, "What were you trying to do? Make her into-into-a freak? Like you?" The only jarring bit here is Scarlett's age; at 12, she seems young for the relationship she develops with Kian, which includes intense conversation and a night spent out by the lough. Readers will be captivated by the wise, wild Kian, though, who disappears when others are around; he adds to the magic that cloaks Scarlett's story. Ages 9-up. (Oct.) (c) Copyright PWxyz, LLC. All rights reserved

Gr 4-7-Since her parents' divorce two years ago, Scarlett Flynn has been kicked out of five schools. After she ignites a food "demonstration" in the cafeteria, her mother has had enough. With her pierced tongue, black fingernails, and dyed tomato-soup-red hair, the 12-year-old is unwillingly sent from London to live with her father and his new family in Ireland. Aghast at her new school and new home in rural Connemara, Scarlett is angry. Her outlet is the lough where she meets mysterious gypsy boy Kian and his horse, Midnight. He allows her to express herself and provides the escape and friendship she needs. Her nine-year-old stepsister also sneaks her way into Scarlett's heart, helping her to adjust. As she grows more penitent about her behavior, she makes the effort to change and becomes an important player in the family. Infused with a bit of fairy-tale magic, this is a fast-paced yet thoughtful story. The heroine is feisty and troublesome, yet quirky and lovable. Her feelings are justified, and readers will sympathize with her. The character develops tremendously as her anger ebbs and flows, transforming into sincere love and acceptance. Cassidy has written a poignant and strong story about love, forgiveness, and resilience.-Jennifer Cogan, Bucks County Free Library, Doylestown, PA (c) Copyright 2010. Library Journals LLC, a wholly owned subsidiary of Media Source, Inc. No redistribution permitted.

After 12-year-old Scarlett gets into trouble at school again, her fed-up mother sends her off to Ireland to live with Scarlett's father, his new wife, and his nine-year-old stepdaughter. Scarlett is sure it will be horrible there, and at first it is, as she stubbornly rebuffs their attempts to welcome her. Then a mysterious boy helps Scarlett see herself in a new light, and when a crisis arises, she responds with courage and caring. Cassidy perfectly captures Scarlett's tough exterior, which hides years of hurt and neglect, and she creates a character who will easily captivate her audience. The idyllic Irish countryside adds to the story's appeal --Karen Hutt Copyright 2006 Booklist

Twelve-year-old Scarlett has been expelled from school one time too many following her parents' divorce, so her mother sends her to live with her father, who she hates. He left her and her Mum in England while he ran off to Ireland to live with Claire and her nine-year-old daughter Holly. This fast-paced story follows Scarlett's difficult adjustment to her new surroundings and family (which will soon include a new baby) as she rebels in typical teenage fashion by piercing her tongue, dying her hair red and being an obstinate vegetarian. Set in the rural countryside of Kilimoor, near Lough Choill, which boasts the magical Wishing Tree, Scarlett soon meets Kian, a boy of her own age, and his horse Midnight. He's the only one she doesn't feel the need to battle with her anger and bitterness. Perhaps he also has his own demons? This blend of teen angst and the magical will most definitely appeal to middle-school girls. (Fiction. 11-15) Copyright ©Kirkus Reviews, used with permission.
More book reviews at iDreamBooks.com