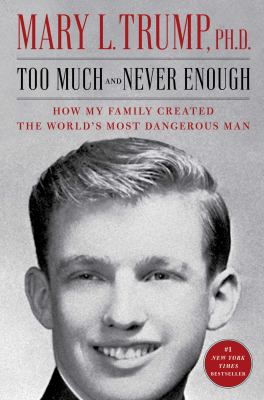 Too much and never enough : how my family created the world's most dangerous man / Mary L. Trump, PhD.

Genre/Form: Biographies.DDC classification: 973.933092 | B Summary: "In this revelatory, authoritative portrait of Donald J. Trump and the toxic family that made him, Mary L. Trump, a trained clinical psychologist and Donald's only niece, shines a bright light on the dark history of their family in order to explain how her uncle became the man who now threatens the world's health, economic security, and social fabric."-- Amazon.com
Tags from this library: No tags from this library for this title. Log in to add tags.

In this revelatory, authoritative portrait of Donald J. Trump and the toxic family that made him, Mary L. Trump, a trained clinical psychologist and Donald's only niece, shines a bright light on the dark history of their family in order to explain how her uncle became the man who now threatens the world's health, economic security, and social fabric.

Mary Trump spent much of her childhood in her grandparents' large, imposing house in the heart of Queens, New York, where Donald and his four siblings grew up. She describes a nightmare of traumas, destructive relationships, and a tragic combination of neglect and abuse. She explains how specific events and general family patterns created the damaged man who currently occupies the Oval Office, including the strange and harmful relationship between Fred Trump and his two oldest sons, Fred Jr. and Donald.

A firsthand witness to countless holiday meals and interactions, Mary brings an incisive wit and unexpected humor to sometimes grim, often confounding family events. She recounts in unsparing detail everything from her uncle Donald's place in the family spotlight and Ivana's penchant for regifting to her grandmother's frequent injuries and illnesses and the appalling way Donald, Fred Trump's favorite son, dismissed and derided him when he began to succumb to Alzheimer's.

Numerous pundits, armchair psychologists, and journalists have sought to parse Donald J. Trump's lethal flaws. Mary L. Trump has the education, insight, and intimate familiarity needed to reveal what makes Donald, and the rest of her clan, tick. She alone can recount this fascinating, unnerving saga, not just because of her insider's perspective but also because she is the only Trump willing to tell the truth about one of the world's most powerful and dysfunctional families.

"In this revelatory, authoritative portrait of Donald J. Trump and the toxic family that made him, Mary L. Trump, a trained clinical psychologist and Donald's only niece, shines a bright light on the dark history of their family in order to explain how her uncle became the man who now threatens the world's health, economic security, and social fabric."-- Amazon.com

John Bolton, step back into the choir. It's Mary Trump's turn for a solo. Donald Trump's only niece, the daughter of his older brother, Freddy, offers a compact book that is part family history and part exposé, written with the astuteness of someone with a Ph.D in clinical psychology . She begins at a White House dinner, a small affair to honor her two aunts' birthdays, a set piece that crystallizes the complicated and noxious interworkings of the Trump dynasty. She then goes on to spend much of the book explaining the relationship between her grandfather Fred Trump, a bloodless, humorless dictator, and her dad, Freddy, his oldest son, who was destroyed by his inability to live up to Fred's expectations. Freddy's alcoholism led to a fatal heart attack at age 42, and that, in turn, led to Mary and her brother being cut out of Freddy's portion of her grandparents' will. They fought for Freddy's share, but Donald and his siblings banded together, pressuring his niece and nephew to drop the case, including taking away health insurance for Fred Trump's very ill great-grandchild. Decades later, Mary's ability to access financial data from the case records made it possible for her to provide key documents to the New York Times, which was doing an investigative report on the Trump family finances (that piece eventually won a Pulitzer). Woven throughout the narrative is the often-cynical role Donald Trump played in the family dysfunction, along with a detailed chronicle of the president's extensive emotional infirmities. Mary echoes what's been written many, many times before: Trump is "incapable of growing, learning, or evolving, unable to regulate his emotions, moderate his responses, or take in and synthesize information." Written with passion, this holds attention because it offers a more intimate look at Trump--or, perhaps, it's just an episode of Succession in which we're all forced to live.

The long-awaited tell-all from the president's niece, a clinical psychologist. Donald Trump, writes the author early on in this scathing critique, "understands nothing about history, constitutional principles, geopolitics, diplomacy (or anything else, really)." Her account of a night spent at the Trump International Hotel begins with her discomfort at finding her name plastered on every object in the room: "TRUMP shampoo…TRUMP shoe polish, TRUMP sewing kit, and TRUMP bathrobe….I opened the refrigerator, grabbed a split of TRUMP white wine, and poured it down my Trump throat so it could course through my Trump bloodstream and hit the pleasure center of my Trump brain." As readers will quickly realize, there is a fate worse than having Donald J. Trump as president: being related to him. The author describes wandering around her house in shock the morning after the 2016 election. "It felt," she writes, "as though 62,979,636 voters had chosen to turn this country into a macro version of my malignantly dysfunctional family." Few fairy tales were ever colder and greedier than the story of Donald's father, Fred Trump; the author, who specializes in psychopathology, prefers the technical term, "high-functioning sociopath." Donald and his siblings were "essentially motherless" from a very early age, and they were subjected to an ongoing form of abuse summarized by the book's title. But once Donald was tapped as his father's favorite, he was ushered into the proverbial counting house while his siblings were left to fight for the scraps. The author's father was repeatedly humiliated and all but disowned, and he was left to die alone. The author's aunt "wouldn't have been able to feed herself or her son" without Crisco cans of dimes and quarters collected from the laundry machines in the Trump apartments, sneaked to her by her mother. And it goes on, coming to a head in the unbelievable story of Fred Trump's will. Does Mary Trump, Ph.D., have an ax to grind? Sure. So do we all. Dripping with snideness, vibrating with rage, and gleaming with clarity--a deeply satisfying read. Copyright (c) Kirkus Reviews, used with permission.
More book reviews at iDreamBooks.com