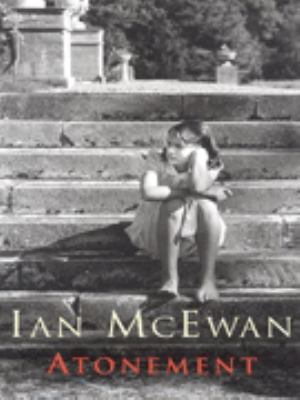 | England -- Fiction | Great Britain -- History -- George V, 1910-1936 -- Fiction | Great Britain -- History -- George VI, 1936-1952 -- FictionGenre/Form: Historical fiction. | General fiction.DDC classification: 823.914 Subject: On the hottest day of the summer of 1934, thirteen-year-old Briony Tallis sees her sister Cecilia strip off her clothes and plunge into the fountain in the garden of their country house. Watching her is Robbie Turner, her childhood friend who, like Cecilia, has recently come down from Cambridge. By the end of that day, the lives of all three will have been changed for ever. Robbie and Cecilia will have crossed a boundary they had not even imagined at its start, and will have become victims of the younger girl's imagination. Briony will have witnessed mysteries, and committed a crime for which she will spend the rest of her life trying to atone.
Tags from this library: No tags from this library for this title. Log in to add tags.
Fiction notes: Click to open in new window

A story that begins with three young people in the garden of a country house on the hottest day of 1935, and ends with three profoundly changed lives. A depiction of love and war, class, childhood and England, that explores shame and forgiveness, atonement and the possibility of absolution.

On the hottest day of the summer of 1934, thirteen-year-old Briony Tallis sees her sister Cecilia strip off her clothes and plunge into the fountain in the garden of their country house. Watching her is Robbie Turner, her childhood friend who, like Cecilia, has recently come down from Cambridge. By the end of that day, the lives of all three will have been changed for ever. Robbie and Cecilia will have crossed a boundary they had not even imagined at its start, and will have become victims of the younger girl's imagination. Briony will have witnessed mysteries, and committed a crime for which she will spend the rest of her life trying to atone.

This haunting novel, which just failed to win the Booker this year, is at once McEwan at his most closely observed and psychologically penetrating, and his most sweeping and expansive. It is in effect two, or even three, books in one, all masterfully crafted. The first part ushers us into a domestic crisis that becomes a crime story centered around an event that changes the lives of half a dozen people in an upper-middle-class country home on a hot English summer's day in 1935. Young Briony Tallis, a hyperimaginative 13-year-old who sees her older sister, Cecilia, mysteriously involved with their neighbor Robbie Turner, a fellow Cambridge student subsidized by the Tallis family, points a finger at Robbie when her young cousin is assaulted in the grounds that night; on her testimony alone, Robbie is jailed. The second part of the book moves forward five years to focus on Robbie, now freed and part of the British Army that was cornered and eventually evacuated by a fleet of small boats at Dunkirk during the early days of WWII. This is an astonishingly imagined fresco that bares the full anguish of what Britain in later years came to see as a kind of victory. In the third part, Briony becomes a nurse amid wonderfully observed scenes of London as the nation mobilizes. No, she doesn't have Robbie as a patient, but she begins to come to terms with what she has done and offers to make amends to him and Cecilia, now together as lovers. In an ironic epilogue that is yet another coup de the tre, McEwan offers Briony as an elderly novelist today, revisiting her past in fact and fancy and contributing a moving windup to the sustained flight of a deeply novelistic imagination. With each book McEwan ranges wider, and his powers have never been more fully in evidence than here. Author tour. (Mar. 19) Forecast: McEwan's work has been building a strong literary readership, and the brilliantly evoked prewar and wartime scenes here should extend that; expect strong results from handselling to the faithful. The cover photo of a stately English home nicely establishes the novel's atmosphere (c) Copyright PWxyz, LLC. All rights reserved

Adult/High School-Set during the seemingly idyllic summer of 1935 at the country estate of the Tallis family, the first section of this thought-provoking novel ambles through one scorchingly hot day that changes the lives of almost everyone present. The catalyst is overly imaginative 13-year-old Briony, who accuses Robbie, her sister's childhood friend and their housemaid's son, of raping her cousin Lola. The young man is sent to prison and Cecilia, heartbroken, abandons her family and becomes a nursing sister in London. In the second part, McEwan vividly describes another single day, this time Robbie's experiences during the ignominious British retreat to Dunkirk early in World War II. Finally, readers meet Briony again, now a nursing student. She is aware that she might have been wrong that day five years earlier and begins to seek atonement, having clearly ruined two lives. In a story within a story, McEwan brilliantly engages readers in a tour de force of what ifs and might have beens until they begin to wonder what actually happened. The story is compelling, the characters well drawn and engaging, and the outcome is almost always in doubt. The descriptions of the retreat and the subsequent hospitalization of the soldiers are grim and realistic. Readers are spared little, yet the journey is worth the observed pain and distress. Well-read teens will find much to think about in this novel.-Susan H. Woodcock, Chantilly Regional Library, VA (c) Copyright 2010. Library Journals LLC, a wholly owned subsidiary of Media Source, Inc. No redistribution permitted.

McEwan, a master of psychologically acute and elegantly gothic tales, won the Booker Prize for Amsterdam (1998) and now weighs in with an even more polished and entrancing novel. It's 1935, and England is experiencing a heat wave, while chaos rules at the Tallis country estate. Mr. Tallis is always at the office; his lovely wife, suffering from migraines, is usually in her darkened bedroom. Their youngest, 13-year-old Briony, a budding writer, keeps busy composing silly romances while waiting for her visiting older siblings and displaced cousins. Brother Leon, a bank clerk, arrives with an unattractive but wealthy friend. Sister Cecilia is home after finishing up at Cambridge, as is the sharp and ambitious Robbie Turner, their cleaning lady's son. The cousins, freckly twin boys and the newly nubile and wholly untrustworthy Lola, are unhappy victims of an impending divorce. All are hoping for a soothing holiday, but things quickly turn bizarrely catastrophic thanks to the highly imaginative but utterly naive and histrionic Briony, who sees something sinister occur between Cecilia and Robbie and wildly overreacts. McEwan's instantly addictive story line is of the bad-to-worse variety as he moves on to the harrowing vicissitudes of World War II. Every lustrously rendered, commanding scene is charged with both despair and diabolical wit, and McEwan's Jamesian prose covers the emotional spectrum from searing eroticism to toxic guilt. In sum, he excels brilliantly at depicting moral dilemmas and stressed minds in action without losing a keen sense of the body's terrible fragility, the touching absurdity of desire, and time's obstinacy. Donna Seaman

McEwan's latest, both powerful and equisite, considers the making of a writer, the dangers and rewards of imagination, and the juncture between innocence and awareness, all set against the late afternoon of an England soon to disappear. In the first, longest, and most compelling of four parts, McEwan (the Booker-winning Amsterdam, 1998) captures the inner lives of three characters in a moment in 1935: upper-class 13-year-old Briony Tallis; her 18-year-old sister, Cecilia; and Robbie Turner, son of the family's charlady, whose Cambridge education has been subsidized by their father. Briony is a penetrating look at the nascent artist, vain and inspired, her imagination seizing on everything that comes her way to create stories, numinous but still childish. She witnesses an angry, erotic encounter between her sister and Robbie, sees an improper note, and later finds them hungrily coupling; misunderstanding all of it, when a visiting cousin is sexually assaulted, Briony falsely brings blame to bear on Robbie, setting the course for all their lives. A few years later, we see a wounded and feverish Robbie stumbling across the French countryside in retreat with the rest of the British forces at Dunkirk, while in London Briony and Cecilia, long estranged, have joined the regiment of nurses who treat broken men back from war. At 18, Briony understands and regrets her crime: it is the touchstone event of her life, and she yearns for atonement. Seeking out Cecilia, she inconclusively confronts her and a war-scarred Robbie. In an epilogue, we meet Briony a final time as a 77-year-old novelist facing oblivion, whose confessions reframe everything we've read. With a sweeping bow to Virginia Woolf, McEwan combines insight, penetrating historical understanding, and sure-handed storytelling despite a conclusion that borrows from early postmodern narrative trickery. Masterful. (N.B.:Atonement was on the shortlist for this year's Booker, and is favored to win the Whitbread in January.) Author tour
More book reviews at iDreamBooks.com