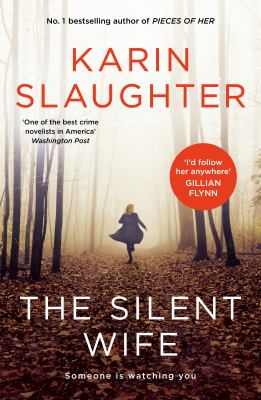 Genre/Form: Detective and mystery fiction. | Thrillers (Fiction).DDC classification: 813.6 Summary: "When a battered young woman is left for dead, a prisoner in the state penitentiary points out that the attack closely resembles the one for which he was convicted-and which he insists he didn't commit. Georgia Bureau of Investigation agent Will Trent enlists the help of his girlfriend, medical examiner Sara Linton, to investigate the new case in light of the older one."
Tags from this library: No tags from this library for this title. Log in to add tags.

From the No.1 bestselling author comes a gripping new crime thriller featuring WILL TRENT and SARA LINTON.

A woman runs alone in the woods. She convinces herself she has no reason to be afraid, but she's wrong. A predator is stalking the women of Grant County. He lingers in the shadows, until the time is just right to snatch his victim.

A decade later, the case has been closed. The killer is behind bars. But then another young woman is brutally attacked and left for dead, and the MO is identical.

Although the original trail has gone cold - memories have faded, witnesses have disappeared - agent Will Trent and forensic pathologist Sara Linton must re-open the cold case. But the clock is ticking, and the killer is determined to find his perfect silent wife ...

'Fiction doesn't get any better than this' Jeffrey Deaver

'In a class of her own' West Australian

"Someone is watching you" -- Cover.

"When a battered young woman is left for dead, a prisoner in the state penitentiary points out that the attack closely resembles the one for which he was convicted-and which he insists he didn't commit. Georgia Bureau of Investigation agent Will Trent enlists the help of his girlfriend, medical examiner Sara Linton, to investigate the new case in light of the older one."

In Slaughter's 10th "Will Trent" novel (following The Last Widow), Georgia Bureau of Investigation Special Agent Will Trent and his partner Faith Mitchell are investigating a murder during a riot at one of Georgia's prisons when an inmate claims to have new information about rapes and murders that occurred nearly a decade ago in Grant County. If the man's allegations are true, it means the wrong person has been blamed. It also implicates Police Chief Jeffrey Tolliver, late husband of medical examiner Sara Linton, and the entire Grant County police department of wrongdoing and attributes several more murders to the same killer. Moving between the Grant County investigation years earlier and the current investigation, this thriller depicts a killer's increasing brutality and sophistication while evading police attention. Will struggles with his role in Sara's life as her painful past and his insecurities are revealed to each other. VERDICT The emotionally sophisticated characters work through the brutality of their jobs in this dynamic psychological thriller and police procedural that will please readers of Slaughter's "Grant County" series. For fans of Meg Gardiner, David Baldacci, and Carrie Smith.--George Lichman, Rocky River, OH

In bestseller Slaughter's macabre 10th thriller featuring Georgia Bureau of Investigation agent Will Trent (after 2019's The Last Widow), Will and his partner, Faith Mitchell, are investigating a prison murder when inmate Daryl Nesbitt extends an offer. Nesbitt will tell them who the killer is if the GBI will look into eight incidents--one recent--that he believes are connected to the rape of Beckey Caterino eight years earlier. Nesbitt is serving time for child pornography discovered on his computer during the cops' investigation of the Caterino case, but Nesbitt maintains that Chief Jeffrey Tolliver--the now-deceased husband of Will's girlfriend, medical examiner Sara Linton--framed him, and that a sadistic serial attacker remains at large. Will's scrutiny of Jeffrey's detective work sends Sara on a wistful trip down memory lane, leaving Will uncertain of their future. Will and Jeffrey's inquiries, unfolding through frequent flashbacks, add nuance and complexity to an already intricate plot. Slaughter delivers an unflinching, deeply empathetic exploration of the stigma surrounding rape and the enduring trauma suffered by its survivors. Agent: Victoria Sanders, Victoria Sanders & Assoc. (Aug.)

First, a prison inmate trying to trade information for better accommodations suggests that there's more to an old case than what police uncovered. Then a woman reported missing is found dead in the woods with wounds reminiscent of those of Rebecca Caterino, a college student out for an early-morning run eight years earlier who was attacked, raped, and left for dead, a case that was bungled by law enforcement. This is particularly sensitive for Georgia Bureau of Investigation agents Faith Mitchell and Will Trent, since the Caterino case was led by the late police chief Jeffrey Tolliver, husband of Trent's longtime lover and GBI medical examiner Dr. Sara Linton. While Mitchell and Trent strongly suspect a serial killer, their supervisor is wary of making that leap. So the agents keep digging, beginning with Caterino's widowed father and eventually hitting pay dirt with the shady but thorough private investigator he had hired. At the same time, the Linton-Trent relationship is strained despite the deep love they share. The narrative moves between the unsolved Caterino case and the present, gathering momentum as it goes, for another riveting entry in the Will Trent series. HIGH-DEMAND BACKSTORY: Slaughter adds depth to her best-selling series with the investigations of old and current cases, while also advancing the key personal relationship. Another slam dunk.

A Georgia prison inmate's offer to unmask a phone-smuggling operation in return for reopening his pedophilia conviction leads Slaughter's regulars into an eight-year-old case that strikes all too close to home. Daryl Nesbitt insists to Will Trent and Faith Mitchell, of the Georgia Bureau of Investigation, that he was railroaded by Grant County Detective Lena Adams and that the sexual images of children on his computer were fruit of the poisonous tree that should never have been admitted into evidence. He certainly didn't attack Grant Tech student Rebecca Caterino, brutally assault her, and leave her for dead; the real scandals are that Lena, the ranking detective on the scene, didn't realize that Beckey was alive till GBI medical examiner Sara Linton realized it half an hour after the police came on the scene and that after Lena sent Leslie Truong, the fellow student who found Beckey's body, walking back to campus, Leslie was raped and murdered before she arrived. Not only are there horrors aplenty along the trail of what looks like a serial killer who may still be notching two victims a year, but revisiting the earlier crimes gives Slaughter, through a series of extended flashbacks, a chance to relitigate the breakup of Sara's marriage to late Grant County chief of police Jeffrey Tolliver, who headed the investigation that sent Daryl Nesbitt to jail. Slaughter, renowned for her shocking opening sequences, this time reserves the horrors for her unflinching descriptions of the multiple assaults, some of which result in fates worse than death for the victims, and for Sara's confrontation with a killer who's both monstrous and all too human. More slow-burning than most of Slaughter's shockers, this one will still rattle you down to your bones. Copyright (c) Kirkus Reviews, used with permission.
More book reviews at iDreamBooks.com