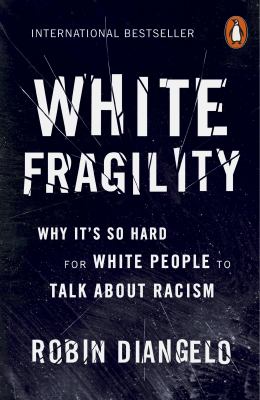 White Fragility: Why It's So Hard for White People to Talk About Racism [paperback]

BookPublisher: London, UK Penguin 2019Description: 192 p. 20 cm.ISBN: 9780141990569.Summary: Now in paperback. This is a ground-breaking book exploring the counter-productive reactions white people have when discussing racism that serve to protect their positions and maintain racial inequality. DiAngelo explores how white fragility develops, how it protects racial inequality, and what we can do to engage more constructively.
Tags from this library: No tags from this library for this title. Log in to add tags.

Anger. Fear. Guilt. Denial. Silence. These are the ways in which ordinary white people react when it is pointed out to them that they have done or said something that has - unintentionally - caused racial offence or hurt. After, all, a racist is the worst thing a person can be, right? But these reactions only serve to silence people of colour, who cannot give honest feedback to 'liberal' white people lest they provoke a dangerous emotional reaction.

Robin DiAngelo coined the term 'White Fragility' in 2011 to describe this process and is here to show us how it serves to uphold the system of white supremacy. Using knowledge and insight gained over decades of running racial awareness workshops and working on this idea as a Professor of Whiteness Studies, she shows us how we can start having more honest conversations, listen to each other better and react to feedback with grace and humility. It is not enough to simply hold abstract progressive views and condemn the obvious racists on social media - change starts with us all at a practical, granular level, and it is time for all white people to take responsibility for relinquishing their own racial supremacy.

Now in paperback. This is a ground-breaking book exploring the counter-productive reactions white people have when discussing racism that serve to protect their positions and maintain racial inequality. DiAngelo explores how white fragility develops, how it protects racial inequality, and what we can do to engage more constructively.

According to antiracism scholar and educator DiAngelo, in conversations about race and combating racism, white participants often struggle with intense feelings of anger and defensiveness when presented with evidence that they benefit materially from systemic white privilege. Here the author offers a valuable guide to this phenomenon-which she terms white fragility-and makes concrete suggestions for how to address it, both in ourselves (if we are white) and in our communities. -DiAngelo challenges white readers to acknowledge and then set aside their feelings in order to think critically about how their racial identity operates on a personal and collective level within a system that privileges whiteness at the expense of those classified as not white. In 12 brief chapters, the author covers meaningful definitions of racism and white supremacy, the myth that only bad people are racist, white racial innocence, anti-blackness, and white (women's) tears. She also offers concrete examples of how to move awareness of white fragility into meaningful antiracist action. VERDICT While especially helpful for those new to the critical analysis of whiteness, this work also offers a useful refresher to anyone committed to the ongoing process of self-assessment and antioppression work.-Anna J. Clutterbuck-Cook, Massachusetts Historical Soc. © Copyright 2018. Library Journals LLC, a wholly owned subsidiary of Media Source, Inc. No redistribution permitted.

Diangelo (What Does It Mean to Be White?), a race scholar and professional diversity trainer, delivers a thoughtful, instructive, and comprehensive book on challenging racism by understanding and working against what she terms "white fragility," the reaction in which white people feel offended or attacked when the topic of racism arises. She explains that the book is primarily intended for white audiences to aid in "building our stamina" for tolerating these discussions in order to challenge racism. Diangelo brings together personal experiences, extensive research, and real-world examples-including missteps she herself has made, such as joking inappropriately about a black colleague's hair-to demonstrate how entrenched racism remains a societal norm in institutions and white people's mindsets, including supposedly "colorblind" thinking and behavior. Her analysis effectively challenges the widespread notion that "only intentionally mean people can participate in racism"; rather, she explains, racism is "deeply embedded in the fabric of our society." She ends with a step-by-step blueprint for confronting and dismantling one's own white fragility to try to "interrupt" racism. This slim book is impressive in its scope and complexity; Diangelo provides a powerful lens for examining, and practical tools for grappling with, racism today. (June) © Copyright PWxyz, LLC. All rights reserved.
More book reviews at iDreamBooks.com