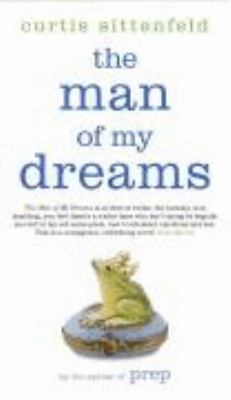 The man of my dreams : a novel / Curtis Sittenfeld.

Genre/Form: Humourous stories. | General fiction. | Bildungsromans.DDC classification: Free Fiction Subject: "Hannah Gavener is fourteen in the summer of 1991. In the magazines she reads, celebrities plan elaborate weddings; in Hannah's own life, her parents' marriage is crumbling. And somewhere in between these two extremes-just maybe-lie the answers to love's most bewildering questions. But over the next decade and a half, as she moves from Philadelphia to Boston to Albuquerque, Hannah finds that the questions become more rather than less confusing: At what point can you no longer blame your adult failures on your messed-up childhood? Is settling for someone who's not your soul mate an act of maturity or an admission of defeat? And if you move to another state for a guy who might not love you back, are you being plucky-or just pathetic?"--Back cover.
Tags from this library: No tags from this library for this title. Log in to add tags.
Fiction notes: Click to open in new window

"Hannah Gavener is fourteen in the summer of 1991. In the magazines she reads, celebrities plan elaborate weddings; in Hannah's own life, her parents' marriage is crumbling. And somewhere in between these two extremes-just maybe-lie the answers to love's most bewildering questions. But over the next decade and a half, as she moves from Philadelphia to Boston to Albuquerque, Hannah finds that the questions become more rather than less confusing: At what point can you no longer blame your adult failures on your messed-up childhood? Is settling for someone who's not your soul mate an act of maturity or an admission of defeat? And if you move to another state for a guy who might not love you back, are you being plucky-or just pathetic?"--Back cover.

Following up on her successful debut novel, Prep, Sittenfeld once again addresses themes of adolescence and identity. With a sure voice, she details the experiences of Hannah Gavener, from age 14 in 1991 to age 28 in 2005. Hannah begins her tale while in temporary exile in Philadelphia with her aunt Elizabeth after her father has broken up his marriage and family. She can handle her father's having thrown everyone out of the house in the middle of the night, but she is thrown into confusion over her browbeaten mother's decision to end years of emotional abuse. With her emotional moorings undercut and replaced with a pervading sense of uncertainty, Hannah begins her college years as a hermit but soon enters the world of hook-ups and crushes after she is befriended by Jenny and challenged by free-spirit cousin Fig. Eventually, she gathers enough courage to cut her ties with her father, but gaining enough experience to let go of the bitterness requires encounters with Ted, Elliott, Mike, Henry, and Oliver. Hannah's wry wit and unsentimental self-understanding make her story compelling. Sittenfeld gives her a voice that is serious without being mordant, hopeful without being flighty. Recommended for public libraries. [See Prepub Alert, LJ 1/06.]-Jan Blodgett, Davidson Coll. Lib., N.C. (c) Copyright 2010. Library Journals LLC, a wholly owned subsidiary of Media Source, Inc. No redistribution permitted.

Sittenfeld's poignant if generic follow-up to her bestselling debut, Prep, similarly tracks a young woman's coming-of-age, but rather than navigating an elite school's nasty and brutish social system, this time the narrator contends with a dysfunctional family and her own yearnings for love. Fourteen-year-old Hannah Gavener is abruptly shipped off from Philadelphia to live with her aunt in Pittsburgh when her mercurial, vindictive father breaks up his marriage and family, which includes Hannah's older sister, Allison, and their browbeaten mother. Sweet but insecure and passive, Hannah had "been raised... not to be accommodated but to accommodate," an upbringing that hobbles all her subsequent relationships. The novel follows Hannah through her teens and late 20s (from 1991 to 2005), as she searches for romantic fulfillment, navigates friendships (e.g., with her larger-than-life cousin Fig) and alternately tries to reconcile with her father and distance herself from him. But the most influential connection Hannah makes is with her psychiatrist, Dr. Lewin, whom she begins seeing her freshman year at Tufts. Although the novel aspires to be taken seriously and Hannah is a sympathetic protagonist, she remains a textbook case of a young woman who wants "a man who will deny her. A man of her own who isn't hers." 12-city author tour. (May 16) (c) Copyright PWxyz, LLC. All rights reserved

Sittenfeld's second novel is as sharply written as her first, Prep(2005), which chronicled one girl's experiences at an elite private high school. The heroine of her follow-up novel is Hannah Gavener, who, at age 14, is grappling with her mother's decision to stand up to her controlling father. The storyline follows Hannah through college and afterwards as she tries to find the kind of romance she believes she's looking for. Her glamorous, beautiful cousin, Fig, never seems to have trouble finding guys, and it is one of Fig's on-again, off-again boyfriends, Henry, who captivates Hannah and becomes her ideal. She goes through two boyfriends--one who is smitten with her, and one who isn't able to stay faithful--before deciding to pursue Henry and find out if he really does hold the key to her happiness. As is often the case in life, things don't work out quite according to plan, and the result is a novel that rings completely true. The magic of this coming-of-age tale lies in how it captures a generation of young women's anxiety and confusion about finding love and direction in their lives. --Kristine Huntley Copyright 2006 Booklist

The author of Prep (2005) goes a second round, to report on the romantic misadventures of a hapless, often clueless, young woman. When it comes to love, Hannah Gavener is a late-bloomer. She's in college before she goes on her first date, and she accepts the advances of the first young man to approach her not because she's attracted to him but because she's too surprised to say no. Thus, the slightly too-sensitive Mike is her introduction to the often disappointing, always confounding world of couplehood. Next up is Oliver, a charming Kiwi who is quite incapable of fidelity. And then there's Henry. After one conversation, Hannah is convinced that Henry is her soulmate. Years pass, and they lose touch, but when they meet up again, Henry talks Hannah into moving to Chicago, where he lives. She soon discovers, though, that Henry failed to mention his girlfriend. Still, she knows that she and Henry are meant to be together, so she settles into a lopsided, torturous non-relationship, one that could have continued interminably if not for the unplanned pregnancy of Henry's girlfriend. This bit of reality jolts Hannah from her obsession and propels her on a course of self-fulfillment, which she finds not with the man of her dreams but as a teacher at a school for autistic boys. That Hannah's happy ending is a rewarding job rather than a Prince Charming is a refreshing departure from the romantic resolution offered by most fiction written about and for young women, and it's to Sittenfeld's credit that she refrains from giving her heroine a makeover or putting her on a diet. Nevertheless, this novel doesn't quite satisfy. Sittenfeld seldom delves below the surface of the action, and everything that happens in Chicago is narrated as a letter by Hannah to her therapist. It's a distilled, distant version of events, almost as if Sittenfeld was loath to dwell on this embarrassing episode in her heroine's life. As a psychological matter, this is understandable--Hannah really is a world-class sap where Henry is concerned--but, at the formal level, it's disappointing. An earnest, if somewhat underdeveloped, antidote to chick-lit. Copyright ©Kirkus Reviews, used with permission.
More book reviews at iDreamBooks.com