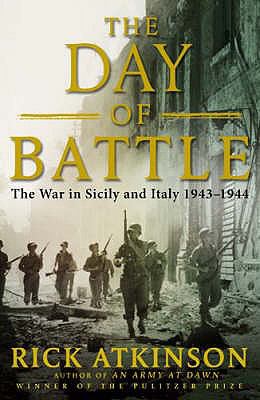 In AN ARMY AT DAWN - winner of the Pulitzer Prize - Rick Atkinson provided a dramatic and authoritative history of the Allied triumph in North Africa. Now, in THE DAY OF BATTLE, he follows the strengthening American and British armies as they invade Sicily in July 1943 and then, mile by bloody mile, fight their way north.

The Italian campaign's outcome was never certain; in fact, Roosevelt, Churchill and their military advisors engaged in heated debate about whether an invasion of the so-called soft underbelly of Europe was even a good idea. But once underway, the commitment to liberate Italy from the Nazis never wavered, despite the agonizingly high price. The battles at Salerno, Anzio, and Monte Cassino were particularly difficult and lethal, yet as the months passed, the Allied forces continued to push the Germans up the Italian peninsula. And with the liberation of Rome in June 1944, ultimate victory at last began to seem inevitable.

Drawing on an astonishing array of primary source material, written with great drama and flair, this is narrative history of the first rank.

The second volume of this former Washington Post editor's "Liberation" trilogy, which began with the Pulitzer Prize-winning An Army at Dawn: The War in North Africa, 1942-1943, this is probably the most eagerly awaited World War II book of the year. Atkinson's clear prose, perceptive analysis, and grasp of the personalities and nuances of the campaigns make his book an essential purchase. [See Prepub Alert, LJ 6/1/07.] (c) Copyright 2010. Library Journals LLC, a wholly owned subsidiary of Media Source, Inc. No redistribution permitted.

Atkinson surpasses his Pulitzer-winning An Army at Dawn in this empathetic, perceptive analysis of the second stage in the U.S. Army's grassroots development from well-intentioned amateurs to the most formidable fighting force of World War II. The battles in Sicily and Italy developed the combat effectiveness and the emotional hardness of a U.S. Army increasingly constrained to bear the brunt of the Western allies' war effort, he argues. Demanding terrain, harsh climate and a formidable opponent confirmed the lesson of North Africa: the only way home was through the Germans: kill or be killed. Atkinson is pitilessly accurate demonstrating the errors and misjudgments of senior officers, Field Marshal Sir Harold Alexander, Gen. Mark Clark and their subordinates commanding corps and divisions. The price was paid in blood by the men at the sharp end: British and French, Indians and North Africans-above all, Americans. All that remained of the crew of one burned-out tank were the fillings of their teeth, for one example. The Mediterranean campaign is frequently dismissed by soldiers and scholars as a distraction from the essential objective of invading northern Europe. Atkinson makes a convincing case that it played a decisive role in breaking German power, forcing the Wehrmacht onto a defensive it could never abandon. (Oct. 2) (c) Copyright PWxyz, LLC. All rights reserved

Flushed with the defeat of Rommel's Afrika Corps in North Africa, Winston Churchill looked ahead to attacking the soft underbelly of Europe. He believed that the conquest of Sicily, followed by a rapid advance up the Italian peninsula, could reduce the necessity for a massive invasion across the English Chanel. Atkinson, a Pulitzer Prize-winning journalist, has written a comprehensive account of the campaign, which is the second volume of a planned trilogy covering the Allied liberation of Europe. (The first volume, An Army at Dawn, 2007, examined the North African campaign.) As he illustrates with masterful use of primary sources, British and American war planners were deeply divided over the necessity of the campaign. Once launched, Allied attacks were frequently improvised and poorly coordinated. Still, progress was made, ending with the liberation of Rome in June 1944. Atkinson conveys the confusion and grinding difficulty of the Allied advance as experienced by ordinary soldiers while also providing interesting insights into the character of some of the top commanders. Left unanswered is whether the high cost in men and materials justified the ground gained.--Freeman, Jay Copyright 2007 Booklist

The liberation of Europe marches on in the second volume of Atkinson's sterling Liberation Trilogy--though readers may sometimes wonder how the Allies ever won. After the German defeat in North Africa, writes Atkinson (In the Company of Soldiers: A Chronicle of Combat in Iraq, 2004, etc.), the U.S. military and political leadership pressed to take the war to northwestern Europe. FDR pointedly said that he shrank from "the thought of putting large armies in Italy," a country that was historically hard to attack and historically easy to defend. American commander George Marshall added that invading Italy would open a prolonged battle in the Mediterranean that would tie down men and equipment needed elsewhere; he proposed an air offensive instead. Yet the British were successful in arguing for an Italian front and "making the elimination of Italy from the Axis partnership an immediate goal," even if the Americans did pledge not to reinforce the front and extracted a due-by date from the British for the invasion of France. How the British succeeded is a tale in itself, one that Atkinson relates with due suspense. How the Anglo-American rivalry played out in the field will be familiar to anyone who knows the film Patton, but Atkinson rounds the story out with a close look at the field tactics of Lucian Truscott's infantry, who "covered thirty miles or more a day in blistering heat," and of George Patton's armor. The costs of advancing through "Jerryland" were appalling, and they forced changes in the order of battle--speeding racial integration in the American military, for instance--while occasioning unheard-of rates of desertion and dereliction: Atkinson observes that the U.S. Army "would convict 21,000 deserters during World War II, many of them in the Mediterranean." Yet, despite rivalry, a fierce German resistance and other obstacles, the Allies eventually prevailed in Italy--even if the Italians, one soldier recalled, kept asking, "Why did it take you so long?" Literate, lucid, fast-paced history--an excellent survey of the Mediterranean campaign. Copyright ©Kirkus Reviews, used with permission.
More book reviews at iDreamBooks.com