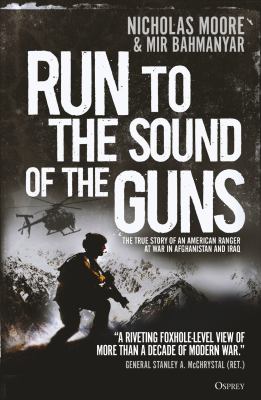 Run to the sound of the guns : the true story of an American Ranger at war in Afghanistan and Iraq / Nicholas Moore & Mir Bahmanyar.

By: Moore, Nicholas (Nicholas B.)

Genre/Form: Biographies.DDC classification: 958.1047092 Summary: A personal and compelling account of the author's service with the U. S. Army's 75th Ranger Regiment, much of it spent on the battlefields of Afghanistan and Iraq.
Tags from this library: No tags from this library for this title. Log in to add tags.

Sweeping from frozen mountaintops to dusty city streets, and everything in between, this is the gripping and deeply personal account of an elite Ranger who nearly lost his life "leading the way" in America's longest war.

As part of an elite special operations unit at the fighting edge of the Global War on Terrorism, Nicholas Moore spent over a decade with the US Army's 75th Ranger Regiment on the battlefields of Afghanistan and Iraq. In this compelling biography now available in paperback, a detailed narrative of grueling life on the ground combines with accounts of some of the most dramatic search and rescue operations of the period to tell the true story of life on the line in the War on Terror.

Charting his rise from private to senior non-commissioned officer, this title follows Moore as he embarks on a series of dangerous deployments, engaging in brutal street combat and traversing inhospitable terrain in pursuit of Taliban fighters and Iraq's Most Wanted. Including revelatory first-hand accounts of high-profile special operations missions including the tense rescue of Private First Class Jessica Lynch and the search and rescue mission for US Navy Seal Marcus Luttrell, Moore recounts, in vivid detail, the realities of life on the front line.

A personal and compelling account of the author's service with the U. S. Army's 75th Ranger Regiment, much of it spent on the battlefields of Afghanistan and Iraq.