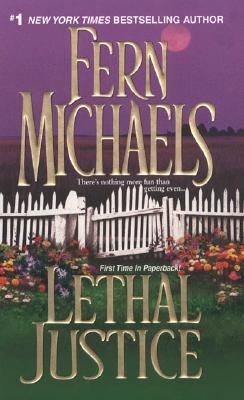 Alexis was a succesful broker whose career was on the rise. But that was before she was wrongly imprisoned for fraud. Suddenly her life was destroyed: convicted and thrown into prison for a year while the true criminals, Arden Gillespie and Roland Sullivan, spent the profits from the scam on themselves.

Once again, Michaels and Laural Merlington perform their magic with these two enthralling tales in the "Sisterhood" series. Both stories draw listeners into the world of the revenge-seeking Sisterhood by inviting them to share the characters' humor, dismay, joys, and sorrows. In Jury, the Sisterhood demands justice for the abused wife of a high-profile Washington, DC, power broker, while in Lethal Justice they exact revenge on behalf of one of their own who was falsely convicted of fraud and theft. An experienced reader, Merlington provides two excellent performances, with clear, distinct, accent-free deliveries and no distracting background noise or tape hiss. Her wide range of voices makes it easy for the listener to differentiate among the various characters-both male and female. Enthrallingly good listens that will be of interest to Michaels fans, to anyone looking for some light fiction, and to all public libraries. Highly recommended.-Laurie Selwyn, formerly with Grayson Cty. Law Lib., Sherman, TX (c) Copyright 2010. Library Journals LLC, a wholly owned subsidiary of Media Source, Inc. No redistribution permitted.

Myra Rutledge and the fun-loving members of her vigilante group, which operates out of Myra's estate near Washington, D.C., deliver more creative punishment to miscreants who escape the traditional legal system in the sixth entry in bestseller Michael's lighthearted Sisterhood series (Sweet Revenge, etc.). When stock broker Alexis Thorn spends a year in prison for defrauding elderly investors, a crime actually committed by her greedy bosses, the Sisterhood plots revenge with the assistance of Myra's childhood pal, heiress Anna Ryland de Silva, and DA Jack Emery, Myra's lawyer daughter Nikki's boyfriend. Reporters Maggie Spritzer and Ted Robinson don't make their job any easier after the pair break into Nikki's office and uncover evidence that could embarrass the Sisterhood. Readers looking for an updated Charlie's Angels in "wild women" mode will be most satisfied. (Oct.) (c) Copyright PWxyz, LLC. All rights reserved

In the sixth installment of Michaels' Revenge of the Sisterhood series, our group of vigilante ladies is finally giving Alexis her turn at justice. Each of the women have been let down by the criminal justice system, so they seek to balance the scales for each other. Alexis worked at a brokerage firm whose partners framed her for the theft of money from her accounts. Found guilty, she was sent to prison for a year. Now it's time for a little payback. The sisterhood's scheme is relatively simple, but there's an extra fillip at the end that puts its vengeance over the top. Add to that a pair of reporters who have almost figured out who they are, and the ladies are in real danger of being exposed. Fans of the series will relish the latest episode because it's as full of daring and rough justice as all the rest. --Maria Hatton Copyright 2006 Booklist
More book reviews at iDreamBooks.com