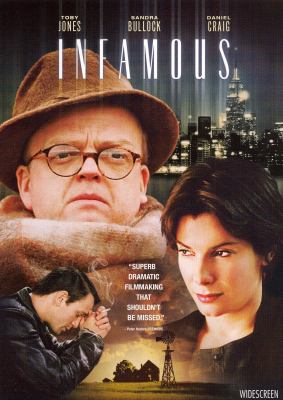 Douglas McGrath's Infamous represents the second major biopic about the avant-garde belletrist Truman Capote to be released within a year. It thus tells roughly the same story as Bennett Miller's earlier Capote, recounting the events that belied the writer's six-year authorship of the seminal "nonfiction novel" In Cold Blood. The story opens with Capote (Toby Jones) visiting the site of the 1959 Clutter family homicide, on a Kansas research trip, accompanied by his close friend and colleague, author Harper Lee (Sandra Bullock). As Capote settles into the community, McGrath uses the preponderance of screen time to explore the emotional tapestry of Capote's increasingly risky emotional attachment to one of the two murderers, Perry Edward Smith (Daniel Craig), with whom he senses more than a few common bonds. McGrath weaves a decidedly bittersweet tale, contrasting the optimism and devil-may-care, "conquer all" attitude of Capote in his early years with a seemingly endless string of poor choices in the writer's later years, from addictions to drink and pills, to a failure to maintain healthy output as a writer, to poorly chosen romantic and sexual entanglements. Most significantly, however, McGrath reveals how the relationship with Smith virtually destroyed Capote as an artist and a human being, by inducing him to sell out on all levels to satisfy his lust for accomplishment and notoriety. ~ Nathan Southern, Rovi

Based on the novel "Truman Capote: in which various friends, enemies, acquaintances and detractors recall his turbulent career" by George Plimpton.

Originally released as a motion picture in 2006.

While researching his book "In cold blood", writer Truman Capote develops a relationship with convicted murderers Dick Hickock and, in particular Perry Smith, while both men waited for their date of execution on death row.