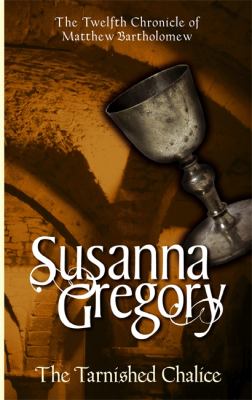 On a bitter winter evening in 1356, Matthew Bartholomew and Brother Michael arrive in Lincoln - Michael to accept an honour from the cathedral, and Bartholomew to look for the woman he wants to marry. It is not long before they learn that the friary in which they are staying is not the safe haven they imagine - one guest has already been murdered. It soon emerges that the dead man was holding the Hugh Chalice, a Lincoln relic with a curiously bloody history. Bartholomew and Michael are soon drawn into a web of murder, lies and suspicion in a city where neither knows who can be trusted.

Sequel to: The mark of a murderer.

Followed by: To kill or cure.

Gregory's 12th reveals skullduggery in Lincoln, a once-powerful city in crisis in 1356. Physician Matthew Bartholomew, accompanied by his book-bearer Cynric, is in search of his lost love Matilde. His friend Brother Michael is to be installed as a cathedral canon. On arriving, they discover two factions viciously battling for power as a string of unexplained deaths grows longer by the day. Michael's reputation as a detective (The Mark of a Murderer, 2005, etc.) has preceded him, and the Bishop asks him to investigate. Twenty years ago, the Hugh Chalice, a holy relic, was stolen. Now it has reappeared. One of the warring factions is a group of villains involved in the original theft but cleared by a bribed Cambridge jury. The clergy of Lincoln are a licentious group, and even Michael seems to succumb to the wiles of the beautiful widow Christiana, who assists the revered Dame Eleanor while waiting to see if the King finds her a husband to her liking. Matthew has no luck learning the whereabouts of Matilde from the wealthy merchant who had once asked for her hand, but each day the Cambridge group becomes more mired in local hostilities, and they barely escape several attacks on their lives. The crimes of the past help to reveal the truth in a bloody ending. Beneath the verbiage lurks a rather mundane mystery. For dedicated medievalists only. Copyright ©Kirkus Reviews, used with permission.
More book reviews at iDreamBooks.com