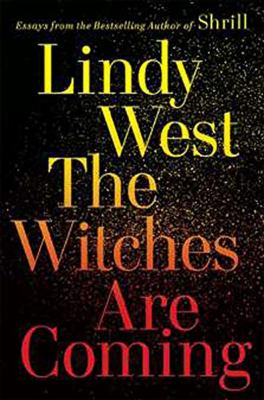 The witches are coming / Lindy West.

Lindy West, the author of bestselling feminist memoir Shrill performs a cutting feminist reading of late-20th-century pop culture in her new book The Witches are Coming. With her characteristically surgical insight, she argues the often misogynistic, narcissistic, privilege promoting messages we have been haplessly absorbing for years while watching television, films and surfing the web have helped form ideologies of discontent, hostility and political instability. We all need to wake up to 'poli-tainment' so we can start demanding more.

The term witch hunt has become a popular rallying cry for many on the political right, most recently employed by those who stand accused of anything ranging from making insensitive jokes to committing sexual assault. It's a favorite expression of President Trump, reminds New York Times journalist West (Shrill) in this sharp, up-to-the-minute, witty collection of essays. Here, West reclaims the phrase, embracing it as a mantra in the ongoing fight against the misogyny, racism, transphobia, and xenophobia ever present in American culture. West's commentary often finds unexpected connections. For example, her examination of Grumpy Cat is a lens through which we can understand how Americans are "addicted to plausible deniability," and ready to embrace obvious lies to avoid reckoning with the original sins of our country's founding. Or her devastating critique of Joan Rivers, who pushed against certain forms of bias in the entertainment industry while ruthlessly enforcing others. VERDICT Covering everything from the 2016 election and #metoo to abortion rights and fat-positive body representation to the climate crisis, West's latest will have progressive readers, especially longtime followers of her work, nodding along, quoting passages to friends. Hand to fans of Rebecca Traister, Ijeoma Oluo, and Roxane Gay. [See Prepub Alert, 5/13/19.]--Kiera Parrott, Library Journal & School Library Journal

Cultural critic West (Shrill) focuses her keen eye and sardonic sense of humor on, among other topics, misogyny in the Trumpian political landscape; the backlash to the #MeToo movement; and Gwyneth Paltrow's lifestyle brand, Goop. The book's title is a call to action against men who defensively label #MeToo a "witch hunt"; West gleefully declares, "We're witches, and we're hunting you." In "Ted Bundy Was Not Charming--Are You High?" she notes that even serial killers and con artists receive the "institutional benefit of the doubt" afforded to straight white men, yet female political candidates such as Elizabeth Warren are held to an impossible standard of "likability." In subsequent essays, West takes South Park creators Trey Parker and Matt Stone to task for promoting the "human-extinction-level dangerous" notion that the far right and the far left are equally stupid, and admonishes comedians Adam Corolla and Louis C.K. for relying on offensive jokes and pandering to conservatives. Some of West's targets (Goop's "resident shaman"; Ivanka Trump's recipe for success: "Love what you do, and work really, really hard") are a little easy, and she's preaching to the choir on issues such as sexism and climate change. Though this is a different kind of book than the more personal Shrill, fans of West's trademark wit and sharp tongue will be satisfied. (Nov.)

Almost as soon as the #MeToo movement started, critics (men) were asking, has it gone too far? Isn't asking men to be responsible for their words and actions a little much? It's turning into a witch hunt, they said. Yes, says New York Times columnist West (Shrill, 2016): ""We're witches, and we're hunting you."" In her characteristic tone that embraces both a clear-eyed explanation of injustice and slightly manic pop-culture (and poop) jokes, the essays here cover memes, abortion, Adam Sandler movies, and the framing of women's anger as hysteria. Throughout, she exposes the temper tantrum currently being thrown by those in power who refuse to acknowledge the world is changing: people who don't like rape jokes are performing censorship; identity politics are for snowflakes; Prius drivers are lame, and who cares if burning fossil fuels is destroying the planet? She also has choice words for the president and the people who put him in office. Equal parts hilarious and sobering, West's words will help fellow witches articulate why they are so fired up (YES!). HIGH-DEMAND BACKSTORY: West had a huge following before Shrill was adapted for Hulu, and her reach and her relevance continues to grow.--Susan Maguire Copyright 2010 Booklist

A cornucopia of shrewd cultural observations from New York Times columnist West (Shrill: Notes From a Loud Woman, 2016).In 18 pointed essays, the author addresses a variety of topics, including frivolous internet sensation Grumpy Cat, South Park, Guy Fieri, and the global significance of abortion rights and gender equality. In West's opening tirade, she denounces Donald Trump's repetitive usage of the term "witch hunt" while scrutinizing his uncanny "ability to conjure reality out of hot air and spittle." This essay serves as the launching pad for further pieces exposing the sorry state of contemporary American politics and popular culture. Tough, irritated, and eager to speak her truth, the author expounds on the unifying aspects of visibility and activism to cultivate change, especially when countering the denigration of women. Her sharp wit and no-nonsense sense of humor also shine through her dissection of the work of Adam Sandler, Gwyneth Paltrow's diet plan (her avocado smoothie "could give diarrhea an existential crisis"), and how movies like Clue shaped her perspectives and appreciation for one-liners and physical comedy. West rarely minces words, especially regarding documentaries on the Ted Bundy murders and the Fyre Festival or when expressing her sheer appreciation for the legacy of Joan Rivers, and her writing is fluid and multifaceted. Though she often rages at social injustice, she also becomes solemnly poetic when discussing her fondness for the drizzly Pacific Northwest, where she was raised and still resides, a place where she can still feel her deceased father's presence "in the ridges and grooves of my citywe are close, superimposed, separated only by time, and what's that? This is the only religion I can relate to." Only occasionally are the smoothly written essays hijacked by intrusive asidese.g., her experience inside a proselytizing Uber driver's car, a scene wedged into her reflections on climate change. Though uneven at times, the author drives home the critical issues of our time while taking time to tickle our funny bones.Satirical, raw, and unapologetically real, West delivers the bittersweet truths on contemporary living. Copyright Kirkus Reviews, used with permission.
More book reviews at iDreamBooks.com