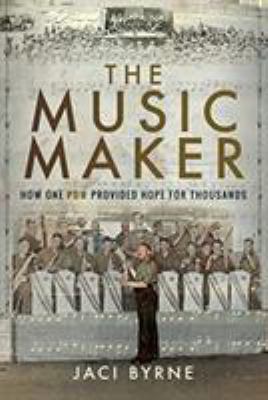 The music maker : how one POW provided hope for thousands / Jaci Byrne.

On 8 May 1945, 46-year-old Drum Major, Henry Barnes Jackson, staggered towards his American liberators. Emaciated, dressed in rags, his decayed boots held together with string, he'd been force-marched for twenty days over the Austrian Alps after five heinous years as a POW in Nazi labor camps. He collapsed into his liberators' arms, clinging to his only meaningful possession--his war diary.Having already experienced the horrific nature of battle in the First World War, Jackson continued as a drum major in the Territorial Army, as well as leading a dance band throughout the 1920s. Following Britain's declaration of war against Germany in 1939, he went off to war once again and was captured during the Allied retreat to Dunkirk in 1940.When the Germans learned of his musical abilities, he was put in charge of forming a band. They called him the 'Kapellmeister,' literally, 'the man in charge of making music', and over the next five years, Jackson and his fellow bandmates would entertain the Germans with concerts and shows in various labor camps throughout occupied Poland.In this captivating testament to human endurance, Jackson's granddaughter has used his personal diary and photographs to tell the unforgettable and gripping true story about the life and times of a humble man who, through his passion for music, overcame extreme adversity.

First published in Australia in 2018 by Big Sky Publishing.