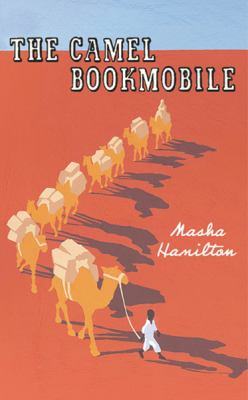 | Americans in Africa -- Fiction | Bookmobiles FictionGenre/Form: Thrillers (Fiction)DDC classification: 813/.6 Subject: Once a fortnight the setlement of Madidima set deep in the dusty Kenyan desert, awaits the arrival of a train of camels laden down with panniers of books. The only condition of the camel bookmobile is that every book must be returned each week or else the visits will cease. Then one day a book is stolen.
Tags from this library: No tags from this library for this title. Log in to add tags.
Fiction notes: Click to open in new window

Once a fortnight, the nomadic settlement of Madidima, set deep in the dusty Kenyan desert, awaits the arrival of three camels laden down with panniers of books. This is the Camel Bookmobile, a scheme set up to bring books to scattered nomadic tribes so tiny and far-flung they have almost become invisible, and to a people whose daily life is dominated by drought, famine and disease.Into their world comes an unexpected wealth of literature - from the adventures of Tom Sawyer and Homer to strange vegetarian cookbooks and true stories of grizzly bear attacks. The only condition of The Camel Bookmobile is that every book must be returned each week or else the visits will cease. Kanika, a young girl devours every book she can lay her hands on and her best friend is Scar Boy, a child who was mauled at the age of three by a hyena.Charming book peopled with warm characters such as Matani the village teacher, his alluring wife Jwahir and the drummaker Abayomi, as well as the camel driver who is certain that one of the camels is possessed by the spirit of his dead mother-in-law!

Once a fortnight the setlement of Madidima set deep in the dusty Kenyan desert, awaits the arrival of a train of camels laden down with panniers of books. The only condition of the camel bookmobile is that every book must be returned each week or else the visits will cease. Then one day a book is stolen.

New York City librarian Fiona Sweeney has taken an unusual assignment in Kenya-running a bookmobile service powered by camel and serving isolated, seminomadic villages like Mididima, where teenaged library customer Kanika lives with her grandmother, Neema. Taban, a young man severely scarred as a toddler by a hyena, is shunned by most of the community, but he and Kanika share a friendship and a sweet anticipation of Sweeney's every visit. Matani, Mididima's schoolmaster, is a champion of the service, but even he can't do anything when several missing books threaten the village's reputation and set off a chain of events that expose misguided motives, hidden agendas, illicit romance, and tragedy. This third novel from international journalist Hamilton (e.g., The Distance Between Us, an LJ Best Book) presents a rare and balanced perspective on issues surrounding cultural intrusion and the very meaning and necessity of literacy, using rich and evocative prose that skillfully exposes the stark realities of poverty and charity in today's Africa. Highly recommended for any fiction collection. [See Prepub Alert, LJ 12/06; the story was suggested by the Camel Mobile Library Service actually provided by Kenya's national library.-Ed.]-Jenn B. Stidham, Houston Community Coll.-Northeast, TX (c) Copyright 2010. Library Journals LLC, a wholly owned subsidiary of Media Source, Inc. No redistribution permitted.

Hamilton's captivating third novel (after 2004's The Distance Between Us) follows Fiona Sweeney, a 36-year-old librarian, from New York to Garissa, Kenya, on her sincere but naive quest to make a difference in the world. Fi enlists to run the titular mobile library overseen by Mr. Abasi, and in her travels through the bush, the small village of Mididima becomes her favorite stop. There, Matani, the village teacher; Kanika, an independent, vivacious young woman; and Kanika's grandmother Neema are the most avid proponents of the library and the knowledge it brings to the community. Not everyone shares such esteem for the project, however. Taban, known as Scar Boy; Jwahir, Matani's wife; and most of the town elders think these books threaten the tradition and security of Mididima. When two books go missing, tensions arise between those who welcome all that the books represent and those who prefer the time-honored oral traditions of the tribe. Kanika, Taban and Matani become more vibrant than Fi, who never outgrows the cookie-cutter mold of a woman needing excitement and fulfillment, but Hamilton weaves memorable characters and elemental emotions in artful prose with the lofty theme of Western-imposed "education" versus a village's perceived perils of exposure to the developed world. (Apr.) (c) Copyright PWxyz, LLC. All rights reserved

Adult/High School-Fiona, a New York librarian filled with a sense of adventure and a desire to do good, heads to Kenya to run the camel bookmobile. She has long romanticized Africa, and she arrives determined but naive. Her most remote stop is Mididima, a seminomadic farming village with a makeshift school, led by Matani, who has studied in Nairobi but returned to educate his fellow villagers. Young Kanika, who wants to leave and study as well; the reclusive Scar Boy; and their families are among Fiona's patrons. When Scar Boy doesn't return the books he's borrowed, the overly rigid local librarian threatens to end the Mididima stop. Fiona, Matani, and Kanika each have stake in keeping the bookmobile coming, so they all try to get the boy to return them. However, he has his own compelling reason to keep them. All of the characters take a turn at narrating chapters, allowing readers to understand their place in the story more fully. Ultimately, each one is changed by the bookmobile, but not in ways that they (or we) might expect. Teens can enjoy not only the multicultural aspect of this novel but also the quiet drama and plot twists that impart the differences and similarities among the characters.-Jamie Watson, Harford County Public Library, MD (c) Copyright 2010. Library Journals LLC, a wholly owned subsidiary of Media Source, Inc. No redistribution permitted.

Yes, there really is such a thing as a camel bookmobile, and the image of unwieldy beasts laden with book-filled boxes provided inspiration for novelist Hamilton ( The Distance between Us, 2004) to compose a lush celebration of the productive--and destructive--power of the written word. Languishing in a dead-end job in a Brooklyn library, Fiona Sweeney, 36, feels time is passing her by. So when the opportunity arises to travel to Africa to manage an unorthodox mobile library, Fi jumps at the chance to influence a culture of nomadic people whose existence is dependent upon more basic human requirements, such as water, food, and shelter. With everything from Seuss to Shakespeare, Fi's regular deliveries of books elate the village women and children but intimidate tribal elders, who fear change and anticipate the loss of their ancient ways. When the bookmobile's one intractable rule is broken, the village turns on the emotionally and physically scarred teenager whose act of rebellion jeopardizes everything Fi has worked for. With a heartfelt appreciation for the potential of literature to transcend cultural divides, Hamilton has created a poignant, ennobling, and buoyant tale of risks and rewards, surrender and sacrifice. --Carol Haggas Copyright 2007 Booklist
More book reviews at iDreamBooks.com